An early phone call revealed that I still have to wait until next week for my blank order (some of it...) to arrive. Faced with the depressing prospect of sitting at home twiddling my thumbs I popped to the tackle shop to buy myself some maggots to add to the sweetcorn I already had and threw my float rod in the car with some other gear. The pond, for that's all it is, I was heading for is notoriously difficult to find. I'd visited the place once before, many years ago, and got lost. Today was no different.

Rumour has it the place is full of rudd with a reasonable average size. Well, that was last summer. This summer the place is crammed with tiny rudd. Minnow sized and not much bigger. First chuck in shortly after one o'clock with a single white maggot on a size sixteen saw the float sail away, resulting in the first of numerous mini-rudd. 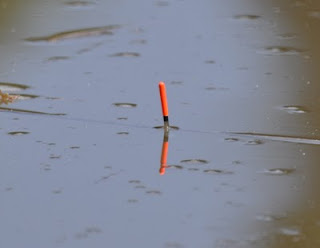 A float
It was a fish a cast until I got fed up. I took the photo below of one to try out the close up attachment for my DSLR. After releasing the fish I switched to a grain of corn and set the float a bit deeper to put the bait on the bottom, with the bulk shot slid down the line to get the bait through the rudd in the surface layers. 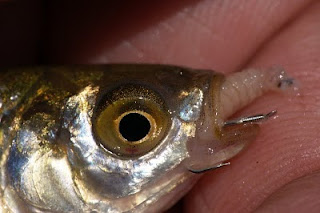 Tiny, tiny rudd
While I was reviewing the photo on the camera's screen the rod butt hit my right leg. I looked up to see the rod tip arching down. It turned out a tench, probably the second smallest I have ever caught, had hooked itself. The fight revealed that my old Abu 501 is in need of some attention. It was far from smooth when backwinding. 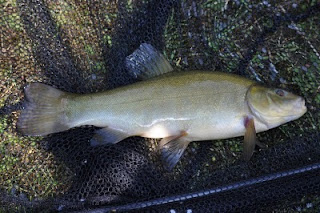 1st tench of the year!
The corn certainly put the mini-rudd off. Bites slowed right down. I shallowed the float up to avoid any more tench and catapulted out some freebies. Almost immediately the float sank and I struck into a fish that felt like a better rudd. It came off... There was a lull then I had two bites in two cast resulting in two rudd of eight or ten ounces. 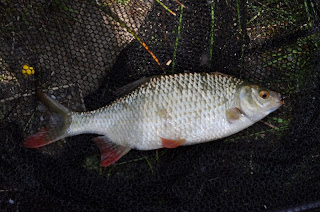 A pale rudd
Heavily coloured water always means pale looking fish, and all the rudd and the tench were like that. It's a shame, as it takes some of the pleasure away for me. One thing's for sure, a few perch in the pond would wax fat on all the rudd! For a while I amused myself by seeing how many maggots on the hook it would take to deter the tiny fish. I gave up at four. The bites did slow down, but eventually a fish would manage to get the hook in its mouth. Then I went back to the corn.

This produced the biggest rudd of the session, all 14oz of it. A bit of an old warrior too with missing scales and top lip. That was my signal to wrap up. It hadn't been quite the fishing I had hoped for. Kind of fun, but all the mini-rudd did was make me think what good baits they'd make for perch or eels.

In between bites on the corn I'd tried my hand at photographing damselflies that were alighting on an alder sapling at the water's edge. The red ones were more spooky than the blue ones. Any sign of movement and they'd fly off, while the blue ones were far more tolerant. I still can't get the hang of this close up photography lark to my satisfaction. 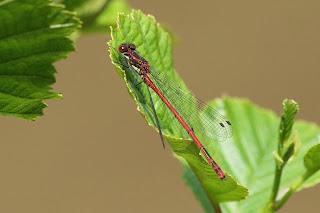 Not a blue damselfly
Posted by Dave Lumb at 8:27 pm