The same but different

Having achieved my main target for the summer I lost motivation, and damp evenings didn't encourage me to snatch short sessions among a heavy workload. With work slowed down I'd been twiddling my thumbs a bit until yesterday when I suddenly, and unexpectedly, rounded up my barbel gear and headed back to the river for the first time in a little over five years. The river was dropping according to the on-line level gauge which would mean I'd be able to get a reasonable look at how things had altered since I'd been away. It woudl also be in reasonable condition to give me a fair chance of catching.

As I got close to the river a few things had altered in the surrounding area. A few new houses and silage clamps. My biggest surprise was that there wasn't a car in the car park at seven fifteen on a pleasant July evening with the river still carrying some extra water.  Had the fishing gone down the pan? At least it meant I had the pick of the swims. I walked to the bank without my gear and found more changes. Difficult to describe them but the bank itself had altered somehow. Sort of eroded and flattened out compared to how I remembered it. The opposite bank had also eroded somewhat but the flow patterns looked familiar. My starting point was obvious. The old banker swim.

Although this wasn't quite the same as it used to be it was still reasonably comfy to fish. I got the rods out of the quiver, put the sticks in either side of my low chair and set about removing the five year old, now rock hard, baits from the hair rigs. I didn't bother retying any knots (that's braid for you or sharpening any hooks. I just popped on fresh (as in five year old but not dried out) baits, attached mesh bags of  fresh (as in bought recently) pellets and cast out to where I thought I should. The  I settled back to carry out the river ritual of filling PVA mesh with pellets. 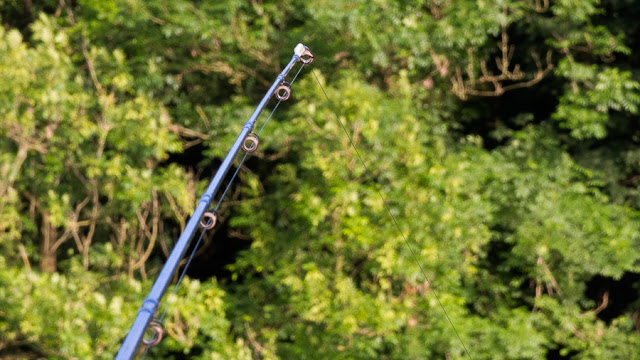 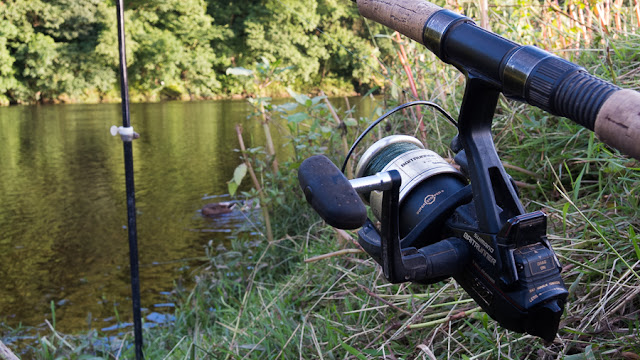 Downstream the bank looked strange. When I realised that an old tree was missing I understood why. Age and gales must have finally taken their toll. What hadn't changed was the birdlife. Probably not the same birds, but the same species. Mallard families dabbled in the margin, goosander departed the scene, a buzzard hung on the wind high above the trees on the high bank where swifts swirled and screamed.

It wasn't long before my confidence was boosted by a short chub rap on the upstream rod. There were fish about other than the sea trout jumping splashily. It would only be a matter of time before I was in action. It was about forty minutes in fact. After starting out with two boilies on the hair I'd chopped one in half after a couple of chub raps to put the baits further from the hook bend. I just don't like having a bait tight to the hook.

The bite was the usual stop-start drop back indication. What I connected with felt reasonable and I was convinced it was a barbel until I got sight of the fish. Well, I was almost convinced because although it felt like it was resisting it didn't do much swimming away. I think it must have had it's gob open to act like a drogue in the flow. However, for a chub it was nice looking one. Unusually brassy and not tatty looking. I overestimated its weight through lack of practice, but still snapped it's portrait on the mat. 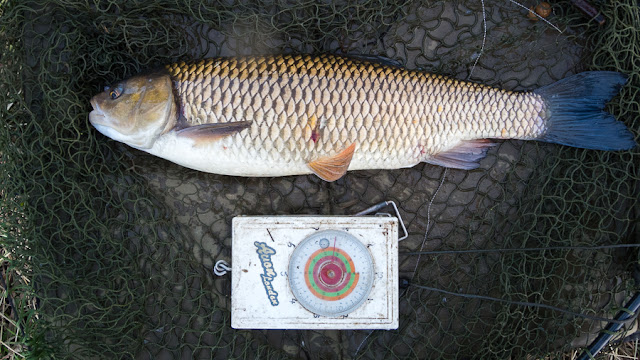 As I paddled in the edge to release the chub I spotted something part buried in the silt. It seems that one sad fact of river fishing doesn't change. Barbel end up dead. Hardly surprising considering some of the inadequate gear that gets used and the length of time that leads to people playing them for. I can never understand why some feel the need to fish as light as possible, or to make statements that they can land 'anything' on their gear, when they could use stronger tackle and catch just as many fish without them being knackered when they are put back. My ranting won't do any good though. 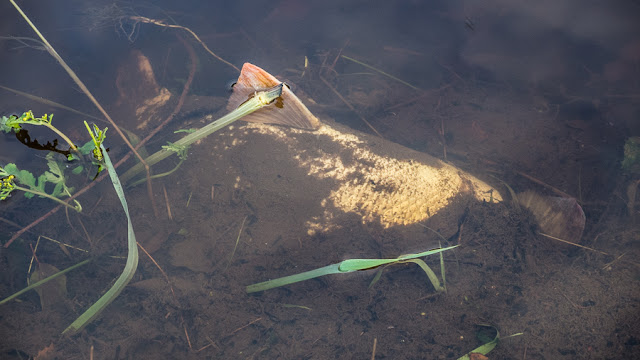 In the next hour I had two more drop backs, both of which resulted in the rig being snagged. After much pulling from  various angles the first time I got everything back bar the lead. The faithful paper clip had done its job. The second time I wasn't so fortunate and the hooklink got severed. I think it was a combination of the river bed altering and me having forgotten where to cast in the swim to avoid snagging up that lost me two leads. Mostly the latter because when I altered my aiming point I lost no more. 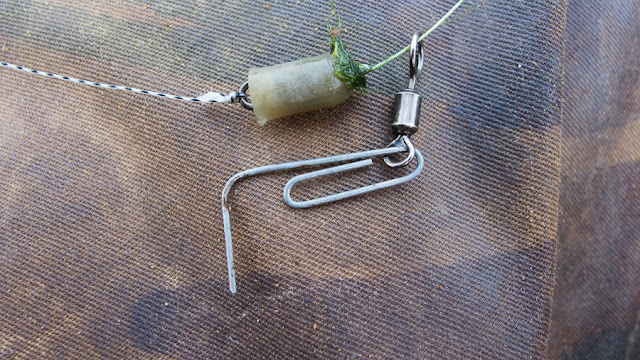 Occasional knocks were coming to both rods, the downstreamer fishing three small pellets on the hair. It was the boilie rod that produced the second positive take though. This fish felt more like it. It managed to get upstream a little and pulled back once it hit the shallows. My estimate of its weight was much better though. I was back on the barbel beat. 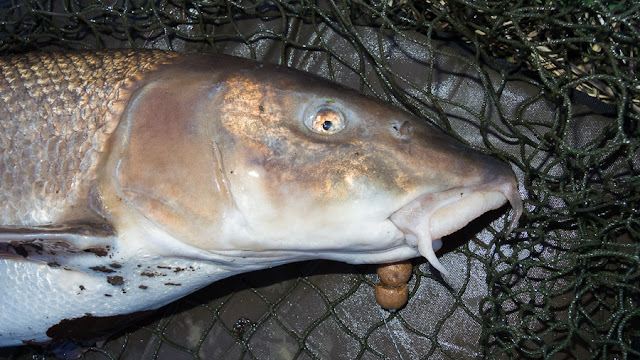 It was dusk proper when the pellet rod produced a fish. A chub which started out fooling me into thinking it was a barbel by taking some line from the baitrunner before I grabbed the rod (I was filling more PVA at the time) before morphing into a writhing eel when I first felt it.

As it got dark and the isotopes glowed more faintly than they used to do the bites dried up. The river felt like it was shutting down. My confidence ebbed. Sometimes it's like that. The witching hour arrives and leaves its spells behind. At eleven I wound the baits in and left pondering whether I'd enjoyed the session or not. It had felt pretty much like going through the motions, just as it had done when I left the river alone. There's not much to this sort of fishing. It's easy, and it works. Perhaps I need to try some stretches I'm not so familiar with to get me interested?