I've never been a hot weather person. And the current hot weather is melting what little drive I have to do anything. My 'can't be arsed' quotient has reached an all time high! The shortest mights of the year haven't helped my enthusiasm for either side of sunset sessions either. No sooner has it got properly dark than it's time to get to bed or risk stopping all night with no sleep. It's no wonder I usually leave the eels alone until July when the nights start to draw in a little. 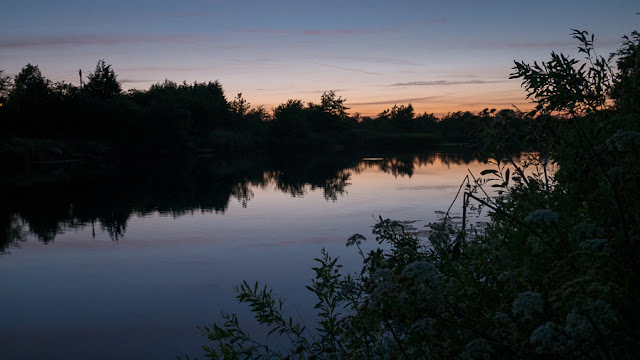 All that aside the evenings and nights, when it's cooled down somewhat are great to be out in. Even cloudless skies make for atmospheric sunsets that seem to last for hours. What I have noticed on both of my latest eel sessions is that runs are coming later. Not just later by the clock but later by the sun and stars. There has been a little interest in my baits in the half hour before dark, but it's picked up over an hour after the light has gone as much as it will go before dawn. This doesn't help me get home for sleep.

I'd had a few missed and aborted takes before I started to pack up at twelve thirty on the first session, then I foul hooked a small eel, which slimed the leader good and proper. While I was sorting the mess out I had another run which I missed. If I hadn't drained the last of my bottle of pop I might have stopped a bit longer. However I did plan to start and finish later on my next session. 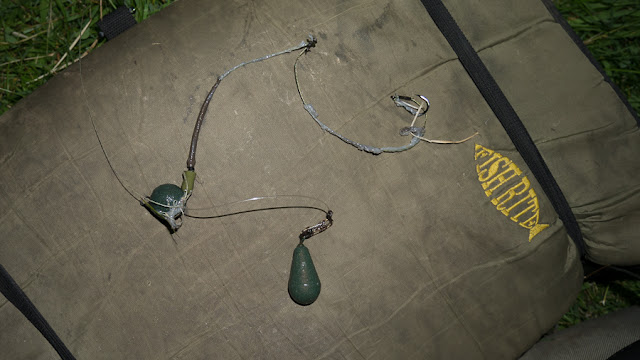 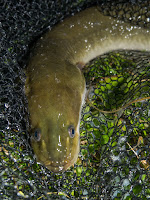 It was nine fifteen when the latest eel session got under way. Apart from making the tramp to the swim a little cooler it also cut out the waiting time to the start of the action. Even around ten there had been carp cruising the surface and apart from some worm nibbling the eels didn't make their presence known until eleven.

It was the usual story of twitchy takes, pinched baits, and short aborted runs. Either there are small eels pestering me or my presentation is up the Swanee. I suspect the former. While I was getting action it was sporadic. Either stick it out until late in the hope of a good one or pack in around one and get some shut eye. After missing a proper run I connected with one at twelve thirty. Not big enough to tax my new 50" landing net, or trouble the scales. But it did make me think that later might be better if I can muster the enthusiasm for an overnighter. At one I packed up and sweated my way home.
Posted by Dave Lumb at 9:13 pm

As with election results these days it's almost impossible to predict how an eel session will pan out. A short evening session last week produced one eel but quite a few takes. The next session on Sunday, despite my expectations, resulted in just one run when I was a bout to pack up. And that was missed, at least in part because the rig was tangled. Despite being keen to get an overnight session in the weather was against me. I really don''t fancy spending a night in the rain jumping in and out of the bivvy as I try to hit takes. Election night was set to be dry with some rain in the morning. If the weather forecast was right I'd be able to pack up after sun up and get back home in the dry. So it proved. 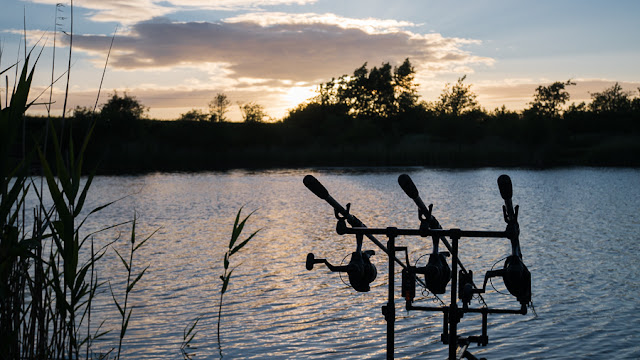 I was set up in good time but even the worm was left alone as the sun began to sink.It was quarter to ten when the right hand deadbait absolutely tore off. Eels one, me nil. Over an hour and a half passed without any indications. The signs were that it could be a night of infrequent action but the chance of a big eel. Then the right hand rod was away again. This time I hooked the culprit. and it was doing so little it felt like I'd hooked a soft snag. Something was slowly coming towards me against the pressure of the rod. I threw the landing net in the edge and tried to push it forward to sink the mesh. Damn. It was caught on something. Keeping the rod bent I managed to untangle the mesh with my left hand. The eel was then easily netted. It wasn't as large as I'd hoped. Later I started pulling weed in from the same area and wondered if the eel had wrapped its tail around a clump. 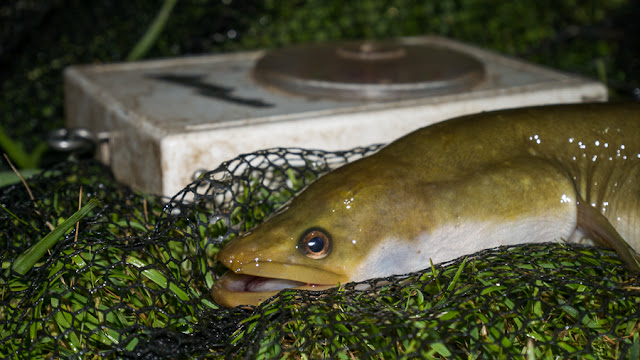 A fresh bait was hooked up and cast out. This was picked up after 25 minutes. Another missed take. And so the usual selection of dropped and missed runs proceeded at very infrequent intervals. So infrequent I managed to nod off a time or two. Even if not for long. A couple of fish were bumped off on the strike. All the action coming to deadbaits, which was unusual.

Although the night wasn't warm it didn't feel cold either despite the heavy dew in the morning. It was a noisy night though. All night reed warblers were warbling their scratchy song, possibly because of the bright full moon, a water rail or two spent a mad ten minutes squealing, and what I took to be a snipe flew by making it's strange whirring sound. Thankfully there were no ratty rustlings in the reeds and the only rodent that made its presence known was a wood mouse. As we approach the solstice the nights are short. The sky to the north hardly got dark at all. Which only gives a few hours of  'eel time'. It was still good to be out after dark on such a night.