A change of direction

The light was starting to fade by the time I had my baits out at nine. Partly due to being a month past the longest day and partly due to the overcast sky. A piece of squid had been under-armed out on the left hand rod and a bunch of worms cast well out into Bleatmere for my first overnight eel session for a long long time on the other one. Recent summers seeing me on the way home well before first light after my eel sessions.

The next jobs were to get the bedchair and brolly sorted out so I could be on the rods quickly, then get the kettle on. Water out, teabag and sugar in the cup, milk to hand, stove screwed to the gas bottle and kettle at the ready. Bugger. I'd taken my big tackle box out of the rucksack. Which vital piece of equipment was missing?? The lighter...

I searched high and low hoping I'd have one stashed in one of the rucky's pockets, or in the tackle box I had with me. I considered shorting out a battery with some trace wire in the hope it would glow hot enough to light the gas, such was my desperation. Fear of an explosive catastrophe quashed that idea! Thankfully the overcast meant the night was warm and a little muggy, so drinking cold water or milk wouldn't be too unbearable. One thing the lack of a light did do was decide when I'd pack up in the morning - shortly after it was light enough to see what I was doing without my headtorch.

Right on cue the first run came shortly before ten. Had the sky been clearer I'm sure it would have come a bit later, particularly given the clear water. This run was dropped but signalled the start of sporadic action with short take, bleeps and twitches filling the gaps between full blooded runs that occurred almost hourly. As usual these runs were either missed, ended with a pinched bait or, in one instance, resulted in a fish on - that came off taking the bait with it. Every bit of action was to the squid. When I missed the one o'clock run I thought that would be my lot until the hour before sunrise. Sure enough when I nodded off I wasn't disturbed until twenty five to four, a hint of light in the sky.

To my amazement my strike was met with sold resistance and a writhing feeling coming up the braid and through the rod to my hand. I kept the pressure on and let the eel swim backwards against the well bent rod while I used my free hand to get my headtorch on and lit and the landing net into position. Then I cranked the fish in. As soon as it's head appeared I could see it was a reasonable fish. Maybe not a three, but getting there. 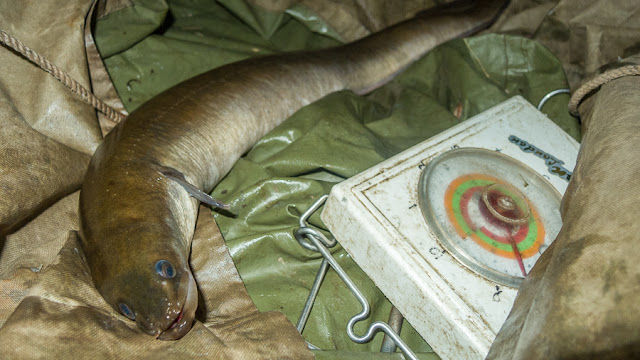 The single hook was easily removed from the bottom jaw and the eel slipped into the weigh sling, the scales proving me right in my prediction. Half a pound short. Everyone else I meet who fishes for eels or catches them by accident gets two pounders all the time, yet they don't come my way with the same regularity and I class them as worth photographing. I guess I'm easily pleased, and usually have a cup of tea to celebrate my small victory. I settled for milk and a Nutrigrain bar for a pre-breakfast snack this time.

Try as I might I couldn't get back to sleep. The sun was on its slow way up, not putting much brightness through the grey clouds. I'd call it quits around five. Or I would have done if the squid hadn't started to speed away again. It was back to striking at ghosts though. But tempting enough for me to give it another half hour, during which time the worm rod saw it's first attention. The couple of twitchy indications proved to be something removing the worms from the hook when I came to wind the rig in.

I hadn't been back home long when it started to rain. Only light rain, but it was the time I'd have been starting to pack up. Something good had come from leaving the lighter at home after all.

For some unknown reason the members of The Pikers Pit forums voted for me to write the 100th article for The Pike Pool blog which features contributions from forum members.

I decided to write a  brief look back at my piking life which you can read here.

The fishing has been dire. Hence nothing to report, unless you'd like to read about bootlace eels and blanking. It's been so bad I've given up. I think the eel rods will be in action next time I get the urge to wet a line. At least I should get a few runs - even if it's a return to the frustration of missing 90% of them!

Rooting around in my stock of blanks the other week I found a 12ft 2.5lb Torrix in gloss finish. I don't know why it was there. I probably double ordered it. It's now built up 'carp style' with six Kigan 3D rings(40-12) plus tip Rover style, Japanese shrink butt grip with stainless button, DPS reel seat with stainless collars. All lettering underneath the rod.

Harrison factory build is listed as £288 RRP. I'm shifting this one for £200 inc delivery. 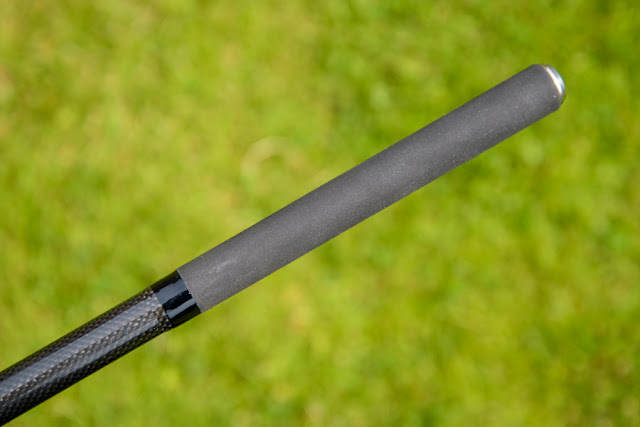 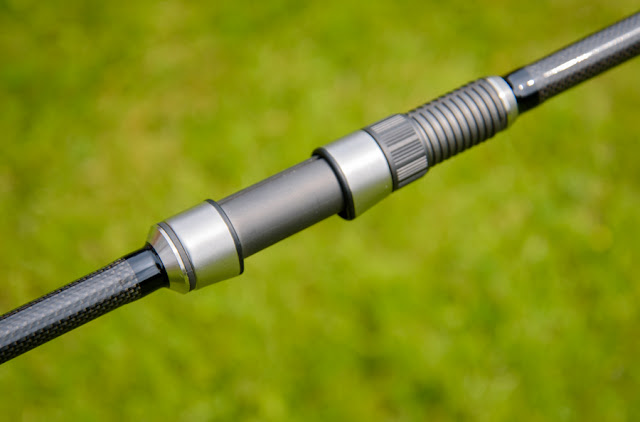 A few weeks back I put a quote in the to-build file and ended up mistakenly building three Ultra Matt P-5s with cork handles and stainless trimmings. Usual Rover Ringing with six BSVOG plus tip, 30mm butt ring. These would normally be £645 for the three but this set are on offer for £600 inc carriage. 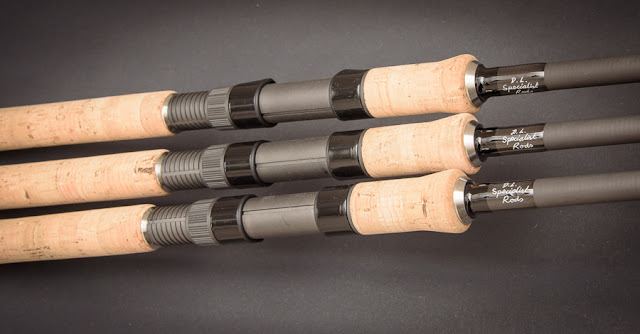