All is right with the world

At long last I'm getting on top of work, and despite the fact I should really have spent the afternoon doing mundane things like getting some cash out of the bank and replenishing my dwindling food larder I dug some bait out of the freezer and threw the rods in the car. I'd checked the weather forecast and rain wasn't due until eight. Yippee! I could leave the brolly at home.

Not having any info to go on there were two choices of where to fish. I took the lazy option and fished near the car, setting up with the wind in my face  made it feel half an overcoat cooler than it was behind shelter. Not that it was cold, by any means. 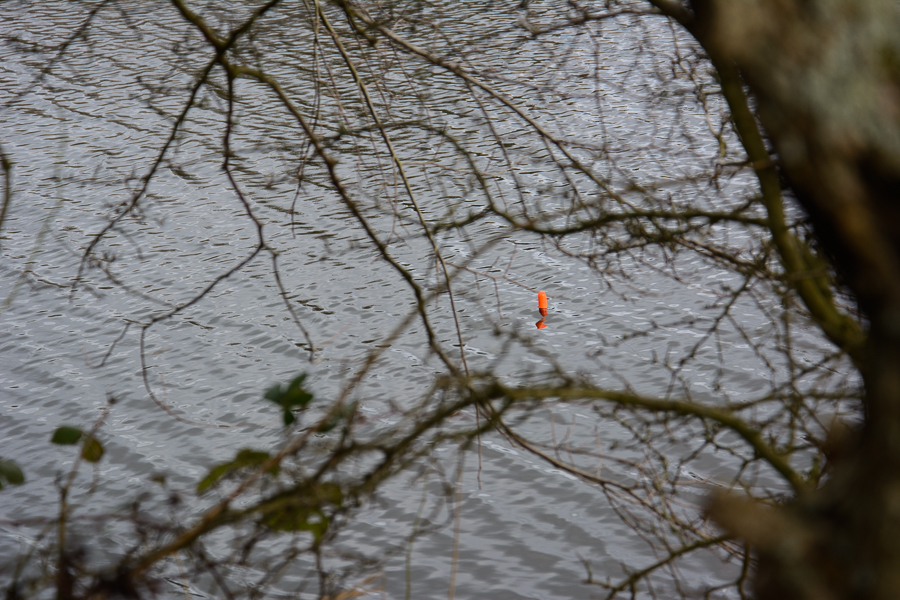 There were two bits of lamprey and a section of bluey that were left over from my last session in the bait bag, so they went on the hooks. Two close in and one further out. It wasn't long before I was wishing I'd bought some maggots yesterday and gone roach fishing. I wasn't feeling at all confident. So uninspired was I that I thought up a way to pop a bait up and even did it to relieve the tedium of watching floats doing nothing but rock in the wind.

After an hour and a half I packed everything away and went as far from the car as I could. I still managed to pick a swim with the wind in my face, but it felt a bit more like it. The lamprey head was still oozing blood so that got dropped in the right hand margin. The bluey section had got squashed when I inadvertently stood on it, and the other bit of lamprey was all washed out so I had to delve into the unopened bait packs. Mixed deadbait packs are often thought of as being aimed at 'noddy' pikers, but they sometimes contain decent baits. The pack I opened in search of a joey to decapitate also had a nice big herring tail in it. I lobbed the herring tail out to my left, not too far but away from the margin, and the macky got the big heave ho.

I'd not been settled down for long when there was a noisy swirl under the rod tops. It sounded like a pike striking (I was rooting in my bag at the time) but it could easily have been a grebe or even a cormorant, although nothing surfaced that I noticed.

At least one predator was in action. the first inkling I had was when I heard a redwing and then saw it flying determinedly followed by a sparrowhawk which gave up the chase and veered off over the reeds. A bleep from one of the Delks made me look up to see the left hand, herring, float bob, dip and then slide away accompanied by the musical trilling of the sounder. Bloody hell! 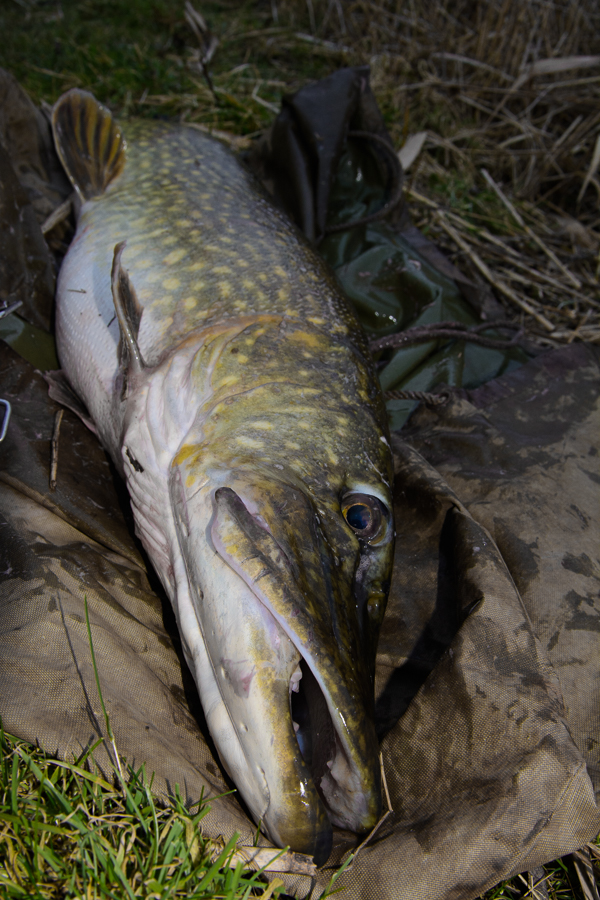 I untangled the landing net from a fallen branch then picked the rod up, engaged the reel and struck in one smooth movement. There was a dead weight on the end of the line. This was either a big fish swimming slowly towards me or a teenager getting dragged in. I'd know which it was to be when it was directly in front of me. If it carried on going to the right it would be a big fish, if it rode to the surface it'd be a teenager. It didn't keep on going. It didn't do much. I'm not sure it wagged its tail once, and made a half-hearted wallow once over the net.

It didn't look like it would quite make the teens as it rested in the net while I readied the scales and stuff. Lifting the fish ashore, however, it had that chesty look that pike often get around this pre-spawn time of year and a chunky build. A couple of ounces over fourteen and  a half made up for my previous blanks.

The herring tail had been shaken free of the hooks during the 'fight', so I had to look for another bait. In the mixed pack there was what looked like a tiny herring. I put that on the hooks and lobbed it out. My confidence was boosted and with over an hour of daylight remaining I was sure of another chance.

Then I felt the rain. Surely it wasn't eight already? It was only a few spots, and the sky looked clearer in the direction the wind was blowing out of. I still put my jacket on, although there wasn't really much need but it kept the wind chill down anyway. As the cloud broke there was a brief, but lovely, sunset. People love photographing sunsets, and I'm no exception, but I don't think photographs do them justice. I keep trying though. 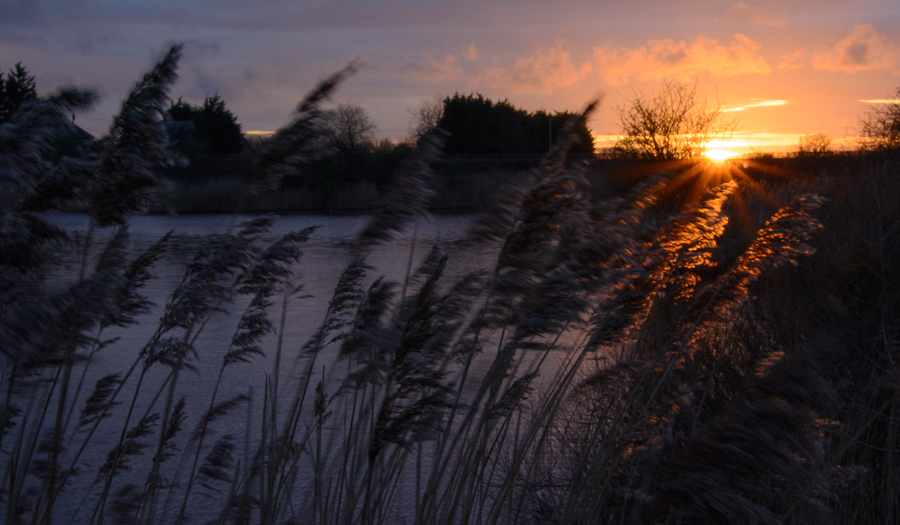 I was still sure that one of the floats would move before the last of the light had gone. As all too often is the case, my certainty was misplaced. With the rain blown over and the wind dropping  I shoved my jacket back in the rucky and traipsed back to the car in a better frame of mind than I'd left it. I might not have got much fishing done so far this year, but I've had a fix now and feel more content with my lot.

No, I haven't caught anything. I haven't even been fishing. The last couple of weeks have been filled with work, problem solving, and waiting around for deliveries - one of which was a box full of large Lureweave meshes! Which meant another day taken up dying the things... 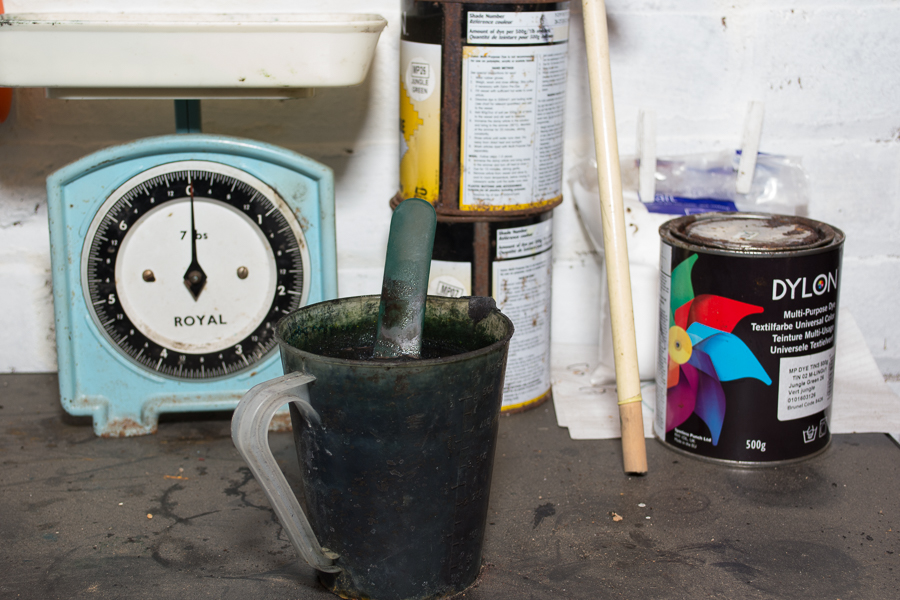 It's a right messy process involving dye (surprisingly..), salt, and hot water in what does a good imitation of a tea urn - probably because it is a tea urn! This time I remembered to wear gloves so my hands didn't turn as green as the meshes. Once dyed the things have to be dried, which can't involve too much heat or the meshes go crinkly. You can probably guess how I know that... 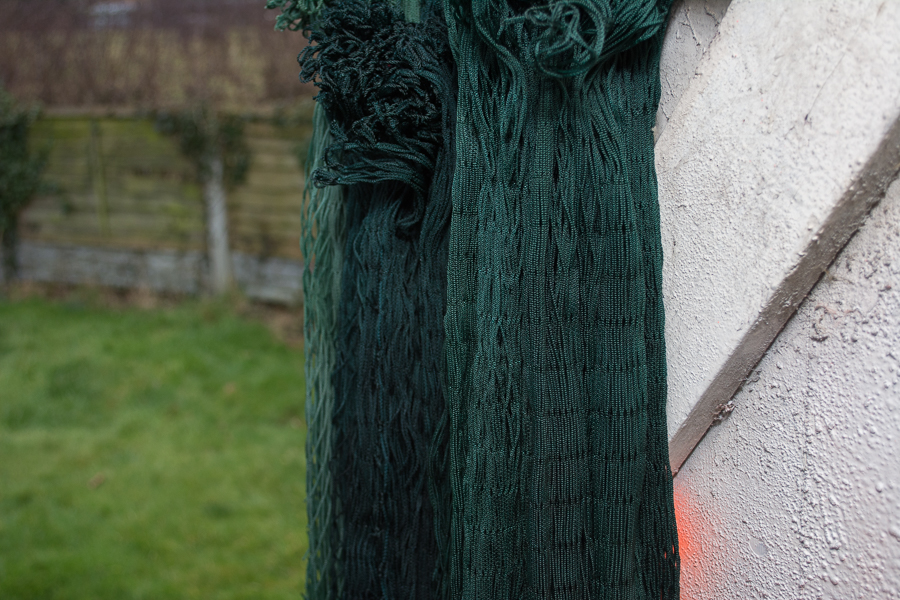 That means they have to be hung up. Naturally the day of the dying was rainy. The garage was cold. The result being that once sufficient green water had dripped off the meshes hung from the garage roof beams they were brought inside to hang over the bath. I am now a very subtle shade of green all over.

Another potential cause for celebration is that I have my webshop back on line with a functioning checkout. I hope. I was told I'd be notified when the missing checkout was reinstated, but I found out when I decided to go look for myself. Thanks a bunch. Thanks too for putting all my prices up by a few pence resulting in me having to alter them all individually to be correct. That's what I've spend this evening doing. What a palaver. Fingers crossed things are back to normal. If they are I'll be working on the way the webshop looks next. All the fonts have gone haywire for one thing. Still, there do seem to be a few improvements - like the possibility of zoomed in views of products. Although I've not activated that yet as it'll mean taking new photos. One step at a time!

I thought I'd post the picture below as it's the closest I've come to catching a fish this year! 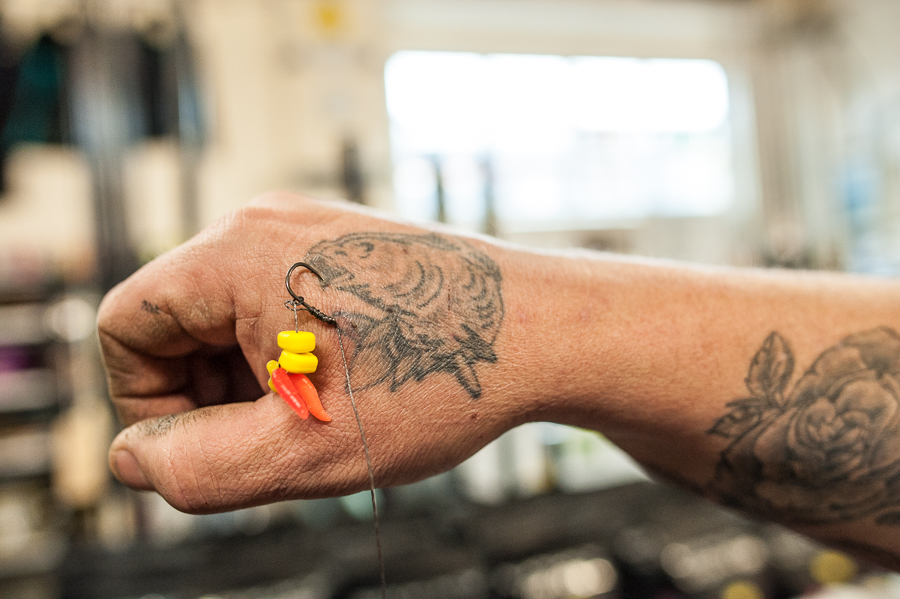 With work well under control I was all set to pick up a pint of maggots tomorrow for a roach session. Fortunately I went to have a look at the roach lake and found its surface less than fluid.Testing the ice in the margin it was at least an inch thick. That was that plan scuppered! 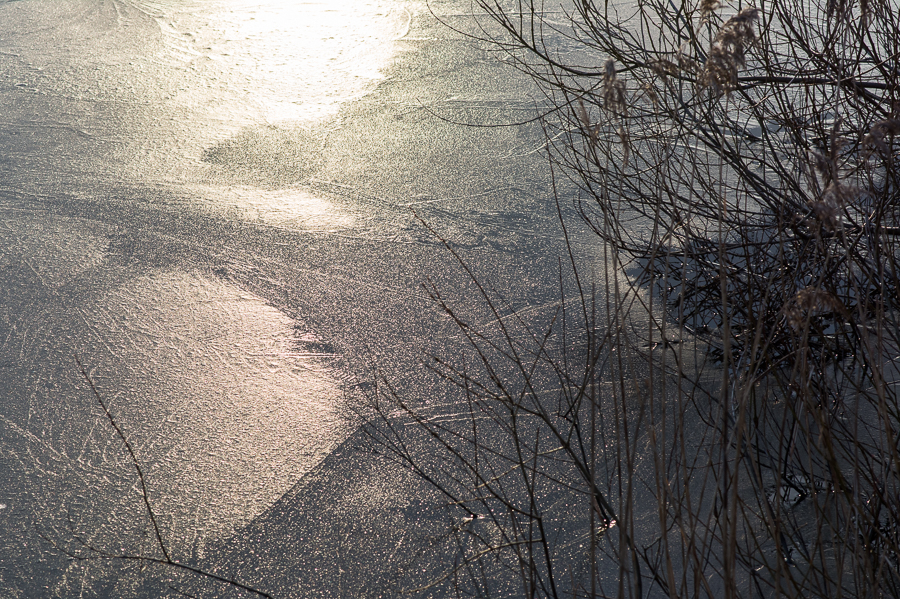 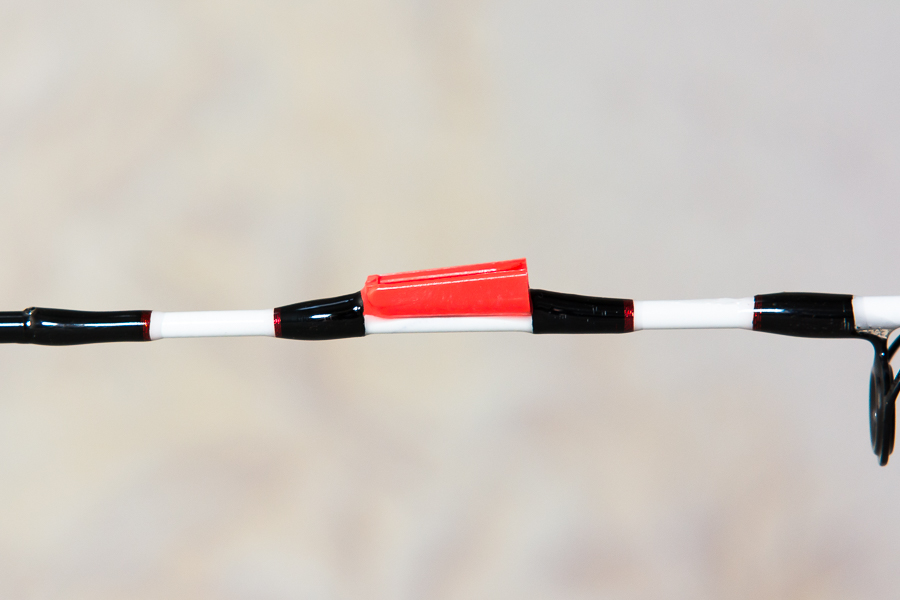 Temperatures are forecast to rise (slightly) over the next few days (but this morning's frost wasn't predicted) so it might have thawed out by the time another batch of blanks arrive next week. Better try and find some moving water to soak some baits in before I get busy again.

Among the odd jobs I have had recently have been fitting Tip Light clips to a couple of beachcasters. Nice and easy to do and it does make a better looking, and more permanent, job than insulation tape - or the cable ties I had to remove before fitting one of the clips!