Out again at last

There was something in the air this morning that made me want to get the rods out rather than the cameras. Not having any pressing work to do as I'm awaiting a delivery of blanks and fittings next week to keep me busy I posted the two orders for bits and bobs, nipped to the tackle shop for some maggots and then headed home to make some pack-up and sort my river feeder kit out. Knowing the tide was to peak around noon I managed to time it spot on to fish as it turned.

The river had been producing big bags of chub, roach and dace through the long cold spell but I hadn't been in the mood to face the weather or the crowds that had been lining the banks - both because of the good catches and the lack of fishable stillwaters.

Needless to say when I asked an angler on the stretch I was going to fish how he was fairing I found out he hadn't had a bite in the hour and a half since he started, and nobody else around had caught much either. 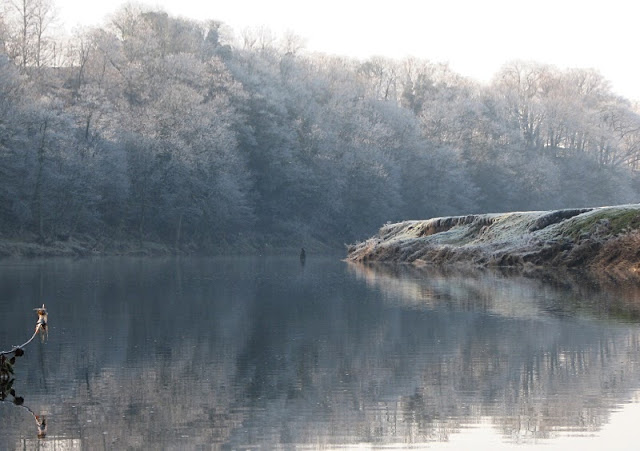 The river looked in good nick, not too low, not too clear. I was still confident as I began to set up. The flow stopped just as I prepared to cast out and the river began to back up a little. After I had fished a couple of casts the tide turned and I swapped from double red maggot on a 14 to a single red on a 16. I reckoned the bright sun and clearish water might need a more delicate approach. Anticipating a huge haul of silvers I had my keepnet at the ready as I have found returning these smaller fish immediately tends to put the shoals off and catches dwindle. Unlike dumb barbel that couldn't care less about their shoalmates being caught and returned. 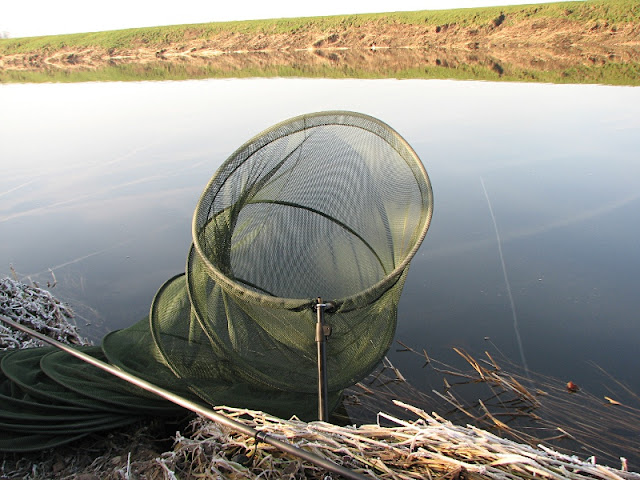 Fred was keeping an eye on the quiver tip while my mind and eyes wandered from the task and watched the birdlife. Apart from a wren in the bush behind me there were flocks of starlings working the field opposite, and mingling with them were smaller numbers of fieldfare and redwing.Three goosander flew downriver and I think I spied a distant peregrine. With other birds calling and being seen it wasn't a bad few hours birdwatching - if I'd been birdwatching! I've almost been sucked into the birding world by a friend of mine. Luckily I realised that I see just as many species, if not more, when I'm fishing. Purely because I'm sat in one place for a few hours. Birders tend to do that in a hide. I find hides unbearably dull after ten minutes. If I want to sit around waiting for something to happen I'd rather be it a fish hanging itself on my rig. Enough of my thankful epiphany and return to the fold of angling. 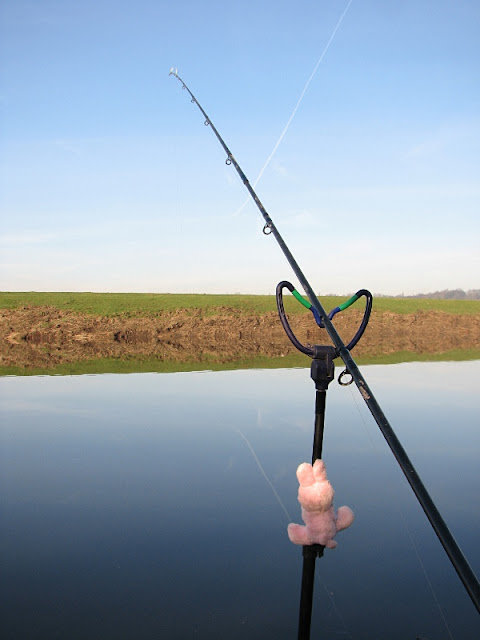 Even though it is still most definitely winter the world starts to anticipate spring once the days start to lengthen. It only takes a blue sky and sunshine to get the great tits chinking away, and every year I am still surprised to see the tips of new shoots timidly poking through the frosted earth. I should know better, because the buds forming on trees actually help push the old leaves off in autumn. Nature doesn't hang around in it's constant cycle.

Bites were slow coming. I kept fishing the same nearside line that has produced for me in this swim before. Eventually the tip did the repeated spring-back-pull-down thing and I felt the first fish of the year on the end of my line. It would have been the first fish of the year if it hadn't dropped off... The next cast was a repeat with the exception that the fish stayed hooked. It was a surprise to net a trout though. I'm not good on differentiating brown from sea trout, so I'll just say it was a trout! 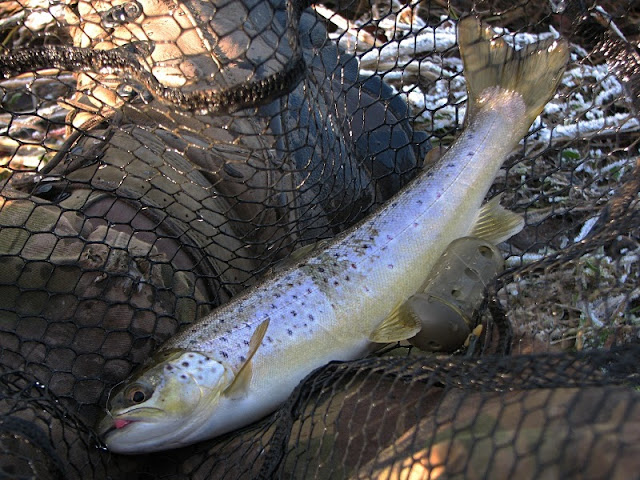 Recasting to the same spot saw another trouty thing wriggling its way netwards. Every time I catch a trout I wonder why people choose to fish fro them. They're stupid and fight like erratic eels. On the plus side they can be tasty to eat, but that's about their only good point. It's no wonder there are rules making them difficult to catch, and a long close season for them on rivers. Chuck a maggot at a trout and it's yours for supper if you want it. They make barbel seem difficult to catch...

At intervals this was how things progressed. Two or three bites on consecutive casts (resulting in a trout or nothing) followed by a lull before another few bites. The one break in the routine was a fish that felt different, and a bit larger, than the small, writhing trout. I wasn't convinced until I saw a 'coarse' dorsal break surface. I was well pleased to slide the net under a 'prime redfin' that tipped the scales at a few ounces over the pound mark. Maybe I'm easily pleased when it comes to roach, or maybe it's the young lad in me, but I think any roach over a pound is worth catching. The roach is one of the most fishy of fishes, and one I grew up catching from my local canal. I slipped the fish into the keepnet ready for it to be joined by more. It didn't happen. So I took its photo through a misted up camera lens, while Fred looked on, as I packed up in the dark with frost forming once more on the banks, and on my luggage. 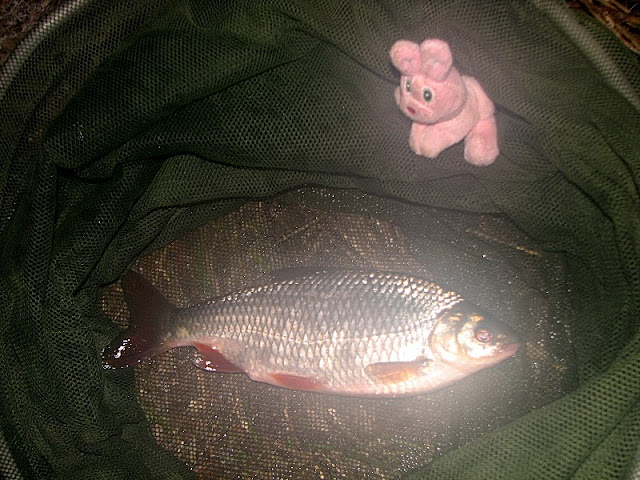 Weighing small fish species can be a bit of a problem. Carp or pike size, and even 'specimen size', weigh slings are unnecessarily large, plastic carrier bags are okay and easy to come by but can hold water (cough!). I've used all three in my time but have never been too happy with them. A few weeks ago after selling my boat I was sorting through some stuff I hadn't been able to get at in the garage when the boat was in residence and found an old 'sling' my mum had made for me when I was a teenager. I'm pretty sure it was based on one I had seen described in a fishing magazine. All it consists of is a square of net curtain material (floral pattern optional), with a nylon curtain ring sewn to each corner. Mine is about two feet square. It folds up neatly, almost shakes dry, and is just the right size for fish like roach, rudd, perch and dace. Almost too simple to be true! 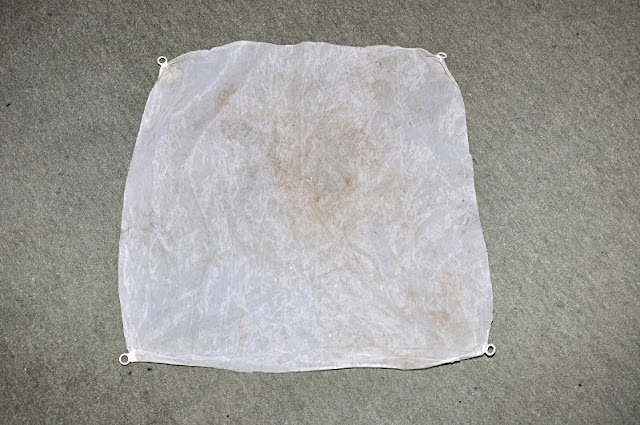