It all started with a walk back from the Post Office along the canal bank. Something about the day told me that fishing was a better bet than clearing moss off the drive or stocking up at the supermarket. If nothing else at least I could stop off at the chippy on my way home after another blank session to cheer myself up. 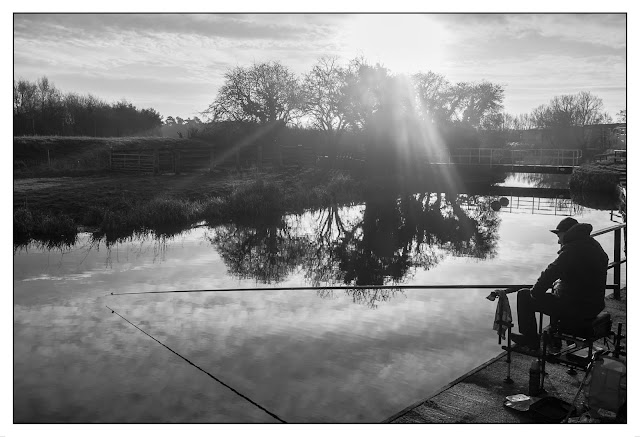 The festive holidays are still not over for everyone and there were cars in the car park. I could see one swim taken but it wasn't on my radar anyway. No problem. On my way to my first choice spot I dropped my gear off in one which has never done me any favours despite its visual promise. When I'm suffering blankitis I always think there are two way out - fish a swim with a track record, or try something left field. This one was the latter sort of swim.

Carrying on without my gear I saw that number one choice was occupied. Worse still by a piker who was unhooking a decent looking fish. I could have got the hump at that but I looked on the positive side - if one decent pike was feeding others might be. number two choice was free but there was someone fishing opposite it. The distance is sufficient for that not to be a problem, but I prefer to imagine I have the place to myself!

On my way back to my gear I stopped to look at a swim which has been kind and unkind to me. It looked well with a ripple on the water from right to left. I could use that to drift a bait along a feature to some reeds. Static baits had been doing me no favours so I was determined to try to make things happen. I was soon back and starting to set up.

I was a bit fed up of using the blueys I'd got. I've caught well enough on blueys but on bigger, chunkier ones cut in half. The ones in my cool bag were not much bigger and fatter than snake launce. I was going to dip deeper into my dwindling stock of lamprey to fish two on the float leger rigs and drift a smelt about under a float.

First out was a fresh lamprey head to the left hand margin. It's tail followed to the right. I would have fished two heads but I had fewer lamprey in the bag than I thought I did. Then I set about swapping the third rig over to float fish. I had two large shot pinched on the trace when I heard a steady whirring sound. The left hand float had disappeared and the reel's spool was spinning.

The net was grabbed and I pounced on the rod. My strike met with a hell of a resistance. Whatever had picked up my bait was either an unexpected monster or in some sunken branches. Keeping the pressure on resulted in movement. A couple of kicks and a large stick broke surface. Another kick and the pike was free.The rod retained an impressive bend as the pike bore deep, made a run or two then thrashed briefly on the top before I drew it over the net cord. The weighsling would be getting an outing. 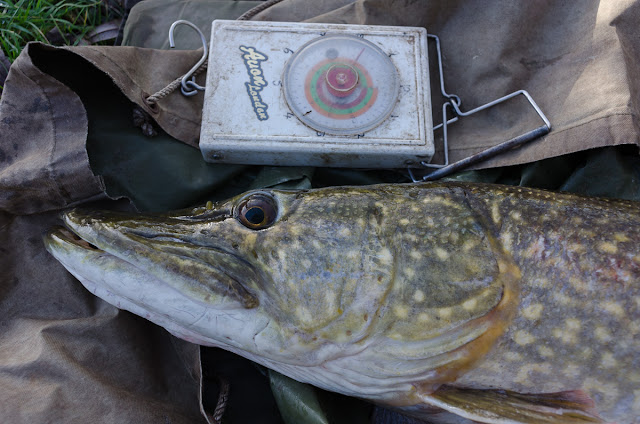 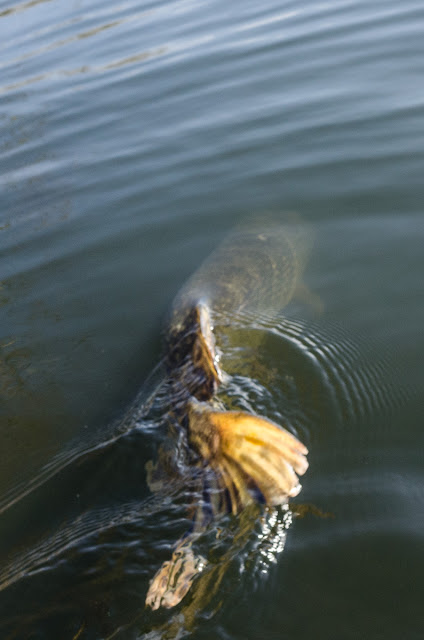 Quickly unhooked, weighed and photographed I slipped her back. As I stood up I noticed the line on the other rod was hanging limp. That float had gone too! The net was up the bank so I'd have to chance hand landing the fish no matter how big. No problem so long as I can see where the hooks are. As it turned out the fish was only a rooter. Easily unhooked and returned without the palaver of weighing.

All that excitement and I'd worked up a sweat. The rigs were in a fit state to be used again, and both baits still attached to the hooks. Back out they went. I got back to sorting the float rig. Or tried. The left hand float bobbed, rose, then after a pause bobbed once more before setting off ever so slowly. Net picked up and I was by the rod winding down again. I felt something, then the bait came back. Oh well. With the blank saved I wasn't too bothered. Pike were in the area and feeding. I might still have a chance. I'd only been fishing for half an hour after all.

Now I had a chance to sit down and write in my new year's diary. I've been using Black and Red notebooks as fishing logs/diaries for years. Now they come with inspirational quotes in them. I'm not a fan of motivational phrases. I much prefer the wisdom of Homer Simpson. "Trying is the first step towards failure." That sort of thing. Still, one line was apt after my run of failures. 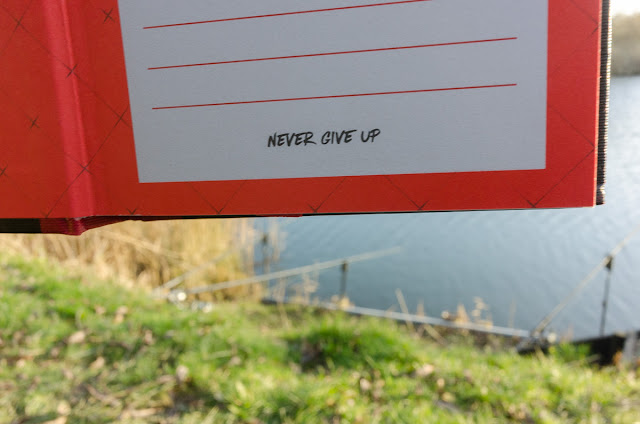 Thinking there might be some merit in sticking in this swim until dark I let the float drift around for an hour. Then the feet got itchy again. I moved to the next swim along. As I set up the second rod rest the first float stabbed under. That was it. Float under, a few sharp clicks on the reel. Nothing more. very odd. As the bait had already been chewed I couldn't tell if there were fresh teeth marks on it.

Time passed. The sun's reflection moved off my middle float in the middle distance. Fieldfares came and went, there are hardly any berries left on the hawthorns now. A buzzard landed briefly in a birch on the far side of the lake. I was pondering a return to my first swim. When boat fishing we'd often 'rest' a spot after catching a few pike from it by moving elsewhere on the water to return later on and catch a few more from the original hotspot. This contemplation was a cue for the left hand float to fall flat. Slowly, very slowly, it began to move to the right. It was so close in, closer than the rod tip, that I waited for it to get to my right before I wound down. Once more I felt something before the bait cam back. I'd give it a bit longer and move for the last hour.

That's just what I did. Alas my only visitors were a robin hopping from rod to rod in the hope I would feed it, and three noisy wrens as it got dark. I wondered if the wrens were planning on huddling together somewhere for the night as I've heard they are liable to do this in nest boxes and such like for warmth during the winter. It was certainly the first time I've seen three wrens together.

Thinking back this day of increased pike activity was also one of increased bird activity. I saw a greater variety than of late, too. Coincidence? I'm beginning to think not.