I reckon that as I'm doing more bird photography than fishing at the moment I might as well blog about that for the time being. Leave now if that doesn't interest you! One reason I'm not fishing is that local stillwaters don't inspire me much, and travelling for two/three day sessions is no fun when they are blanks. Popping out for a few hours and travelling no more than ten miles to take photos is much easier - and cheaper with petrol the price it is nowadays.

My plan this morning was a 'milk run' to hit three sites as the sun favoured them - starting off with reed buntings, followed up by lapwings and rounded off with wrens.

Down at the canal I passed an angler of my acquaintance who was just starting off an early morning pole session. Reed and sedge warblers were in evidence, visually as well as audibly, and a reed bunting was in evidence too. The light was just about coming bright enough as I set up, slightly side-tracked by the reed warblers. Although they were noisy enough they were also on the move. I think they were hunting to feed their broods, possibly a fledgeling or two was around as there were twos and threes to be seen. 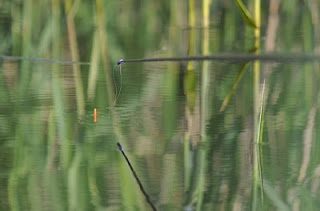 I need a telephoto lens to see a pole float!


The warblers wouldn't play ball, and the buntings only popped up when I was moving my set up. I didn't fancy my chances much and wandered off with the camera to see what was going on. Sure enough a reed warbler was spotted gathering food, insects and caterpillars, flying across the canal and back, and up and down the bankside reeds.
On my way back to collect my gear there was a speedy flash of iridescent blue over the water. Only one thing that could be. A kingfisher. And there it was perched in a willow overhanging the far margin. Framing a shot was tricky owing the to the reeds between me and the bird but I managed a few, even getting a little closer - without falling in the water! Then the kingfisher flitted off, but only to another branch that gave me a slightly better view where it sat and preened. 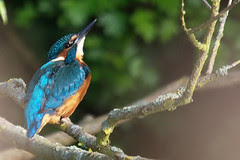 The resulting pics are not the best, they needed cropping and the light wasn't too good under the willow, but a bit of work on the PC made them my best kingfisher shots so far. All the more pleasing for not being one of the birds on the local nature reserve which have had more lenses pointed at them than Britney Spears.


The lapwings weren't too keen on seeing me. With them being in a field with a main road running alongside it, and with a low wall for cover, I was hoping they'd be less wary than lapwings usually are. But they weren't. I gave up and went for a wander along another stretch of the canal where I took some pics of a family of swans simply because they were there. A reed bunting presented itself while I was with the swans, but just that bit too far off to make for decent pics. Marginally the best I've managed so far, though not good enough to post.
Off to the wrens next, and sure enough they were where I thought they would be among the bracken and brambles of a ditch bank. Like the warblers they were noisy and feeding infants. No really good opportunities arose before they flew off up a side ditch, which was a shame as they will come close enough.
Deciding to call it a morning I heard a yellowhammer as I set off back to the car. For once it succumbed to my charms and I had the light behind me. The shots aren't as sharp as I think they should be, but they're okay, and far better than any of my earlier efforts. Typically the bird struck its best poses behind stems and leaves, but that's the way it goes. 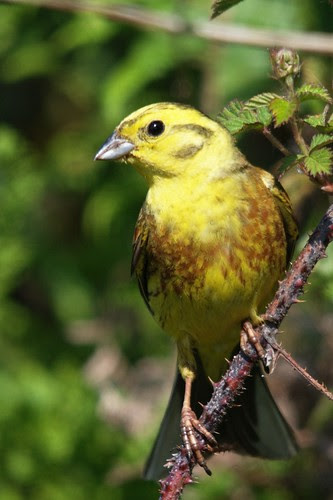 More to fishing than catching fish?

Since my last post on here I've mostly been chasing birds around the countryside trying to get close enough for a decent photograph. It's been a lot of fun and a lot like fishing - sitting in a ditch for ages with nothing in sight then a few minutes of frantic activity before the little beggar flies away again. I've seen some interesting sights, but I've seen interesting birdlife activity when I've been fishing. 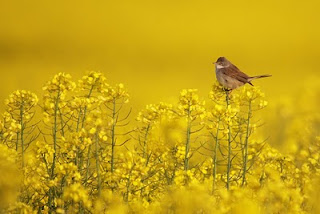 Posing whitehroat
Out with the camera at the start of the week and it was obvious things were warming up. The horse chestnut trees were coming into bloom as were the hawthorn hedges. Both a few weeks late, both signs to me that the tench should be on the move and starting to fill out with spawn. Although the lure of a new bird to photograph had become an addiction I found myself at the tackle shop on Tuesday buying red maggots. I still dithered about when to go, and put it off until the last minute. After the last minute in fact, as I had to set up in the dark. By eleven I had three baits in place, not expecting any action during the dark hours.

The alarm was set for quarter past four but I awoke half an hour early to the sound of tiny feet pattering in the bivvy. This was followed by the distant sound of sedge warblers greeting the coming dawn (although they rarely shut up!). Next to sing was a blackbird high in a tree behind me followed by the rest of the avian choir. On with the kettle and then up and out. First job was to refill the feeders and recast them, one to a distant mark I intended to bait up and fish two rods to - the other being a 12mm Tutti Frutti pop-up, and the second to a spot in catapult range.

That done, and with the pop-up refreshed, I set about spodding out the usual mix of hemp and groats plus dead maggots, the same concoction was also catapulted out over the close range rig. Then it was back to bed.

It had been a warm night, and the day warmed quickly after a light drizzle shower. By nine the sun was well up and the day turning hot. The lake was almost flat calm, the surface unbroken by dark dorsals or pinhead bubbles. The day progressed in pretty much that state of fishlessness.

On the wildlife front there was plenty going on, reed buntings, warblers (two fidgety to identify) and various tits in the willows either side of my swim, coots with young chicks, the inevitably raucous Canada geese and oystercatchers, plus swallows and martins flying over the water and a cuckoo calling from somewhere close behind my swim. Then there was the entertainment provided by watching ants dealing with maggots, dragging their immobilised prey away. 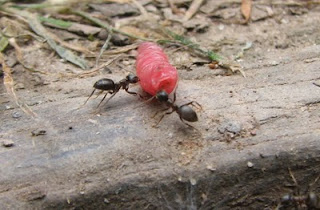 Ants at work
All interesting stuff and a wonderful part of being at one with the great outdoors. While all this, and the sweet but musty smell of hawthorn blossom and the endless swarms of fluffy willow seeds drifting and swirling on the light breeze, undoubtedly adds to the joy of angling it's the fish that make it complete.

Another warm night passed without any hints of rats. Most unusual for this lake and this swim in particular. The sight of mice on my arrival and their pattering feet the first night was a novelty. I'm probably tempting fate here but I am wondering if the long cold winter has thinned the rats out and let the mice survive? It seems implausible. Time will tell.

Day two dawned overcast and the highlight was watching a pair of great crested grebes firstly doing their courtship dance, and then chasing of a couple of coots that were trying to drive them from the nest they were starting to build in the coots' territory. Coots are usually bullying creatures that get their own way, chasing of birds much larger than themselves, but the grebes were determined and their sharp beaks must have deterred the coots as they soon conceded defeat.

As the day grew hot, the air still and the water smooth, carp began to cruise at high speed. It was time to do as the coots and admit I was beaten. It had been nice to be out for a couple of nights by the water. That my back stood up to the strain was a welcome bonus, but the new tackle jinx seems to be continuing. I'm hoping that the three tench blanks have been the result of the new pod, rods, and reels, and that the fourth session will break the jinx and I'll catch. If not then I might as well stick to looking at birds through a camera lens instead of carting a load of redundant fishing tackle along while I do the same through binoculars. If you're not catching fish then you're not fishing, you're birdwatching.