Out with my camera looking for sunset opportunities yesterday I spotted a shoal of fry in some sparse weeds on my local canal. It looked like a perfect spot to nobble a perch or two on lures. With that in mind I returned this evening. Only to find someone floatfishing the very swim - and no other anglers in sight. Plan B. Go try a spot that was rumoured to have produced some big perch last winter.

I was travelling light, one rod, landing net and a shoulder bag containing scales, sling, camera and two boxes of lures. The 'hotspot' was tricky to fish owing to a load of floating weed. I hoped a curly tail shad would be more suited to the situation than trying to drag a treble hook rigged spinner or crankbait. So it proved, and second cast close to some stonework the lure got hit. The fish fell off but I suspected a small (tiny) jack. Another unseen fish dropped off followed by a confirmed sighting of a perch departing the scene. The perch wasn't much larger than the lure, so I swapped to a smaller bait. 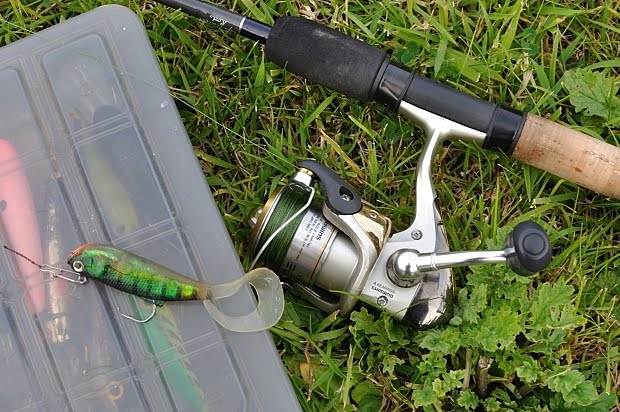 It wasn't long before this lure got hit. And ejected. Then I managed to land a couple of perch both of a similar size to the others I had seen. Alike as peas, and shoaled up in a pod! 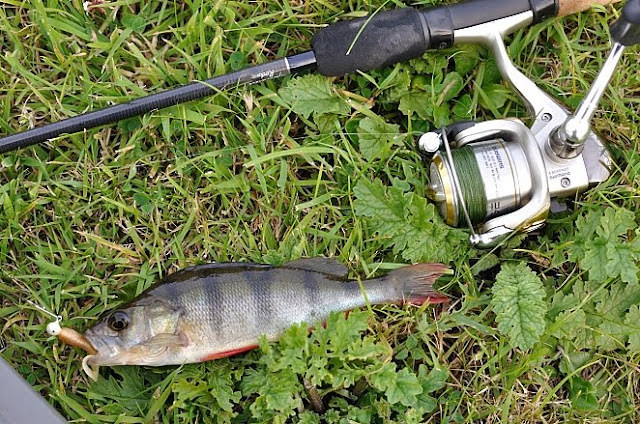 As far as fish landed that was my lot. I continued to drop fish on the small grub, one to a small Mann's crankbait, and a couple or three more to another small grub rigged on a slightly heavier pony-head jig. It was a nice enough way to pass a couple of hours on a windless summer evening. More fish landed would have improved it though!

Losing fish has been my experience of perch on jigs in the past. I don't know if it's the size of the fish or my tackle or technique. Given that only one perch I have lost on such a lure has been one that I might have weighed, I am giving the idea that it is the small size of the perch most credence.

Email ThisBlogThis!Share to TwitterShare to FacebookShare to Pinterest
Labels: perch

How rod blanks are made

Steve Harrison has got a new toy - a Canon (spit!) camera that takes HD video. This has become his latest obsession, but at least it's got him to update his blog after almost a year. One of the videos he's made explains his blank design, making and testing processes.

Watch how the rod behaves in the slowmo section towards the end. It's clearer if you watch it in full screen.