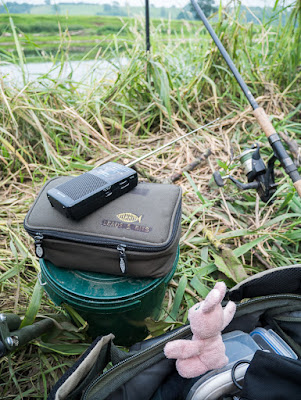 Despite hearing tales of woe about the barbel population on the river having been eaten by otters I've been getting the urge to pay them a visit recently. A change being as good as a rest I put some gear together after the cricket finished for the day and when the Archers were over I set off for an easy access stretch.

There were signs that the swims had been fished, but no anglers about. The path through the vegetation was well trampled too, but the nettles still managed to sting my bare arms as I wandered the stretch to select a swim. The one I settled into was chosen mainly from a comfort perspective, combined with ease of access to the water should I have to return a fish or two.

There were sand martins feeding their young on the wing, a sign that summer is getting ready to turn. The leaves on the trees are already darkened and meadowsweet in bloom.

Knowing the swim from previous visits I was careful to ensure the leads didn't move as I tightened to them. An old standby bait of Sonu crab Pellet-Os, three on the hair, went on the close in downstream rod and one and a half boilies went on the upstream farther out rod. In my haste I'd picked up a tub of my favourite bream/tench/carp boilies instead of the ones I prefer for barbel. They'd have to do. Not that I think a barbel would turn it's barbules up at them. It was mesh bags of mixed pellets on the hooks. Nothing fancy required.

With the baits out I played a waiting game. No frequent recasting. Sit back, tie up more pellet bags, and wait for the light to fade replacing sand martins with bats.

When it was time for a pre-dusk recast the downstream rod was snagged solid and needed re-rigging. Somehow the hooklink got tangled in the undergrowth and ended up with a knot in t. When I'd cut the knot out and retied it the hooklink was shorter than I'd have liked. It'd do.

The margins were alive with fry and there was a good hatch of flies on. So much so that I thought it was raining. I wonder if the presence of otters thinning out the barbel population will see a resurgence of roach and dace? The reports I've heard suggest this might be the case.I doubt that will draw anglers away from the muddy puddle commercials. people have got used to level banks or platforms and parking behind their swims.

It had gone half ten when the downstream rod stabbed down a couple of times then hooped over. There was one barbel in the river! Although it pulled hard and tried to run across the river it didn't stand a chance as it couldn't manage to pull any line from the drag. The rod spent most of the fight in an inverted 'U' as it absorbed the runs and lunges of what was feeling like a reasonable fish.

I managed to get the fish in the net but failed to tempt the lead to join it. Instead the lead slid down the slackened line and got stuck in the marginal rocks. I had to pull for a break to get the fish ashore! My out-of-practice guess for the barbel's weight was a pound light. A quick snap on the mat and she was slipped into a small slack to recuperate. Then I retackled and recast. 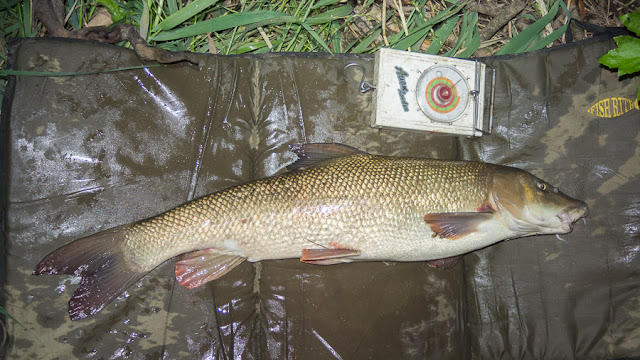 By the time both rods were fishing again it was dark, the isotopes on my rod tips not glowing as brightly as they used to. Twelve years or so looks like time to replace them. There was broken cloud in the sky passing in front of the full moon and a hint of mist up the valley. It was a mild and still night. That didn't stop the valley's herds of slugs sliming over my unhooking mat and even onto a tub of pellets in my rucksack. Slugs must have  a well developed sense of smell. 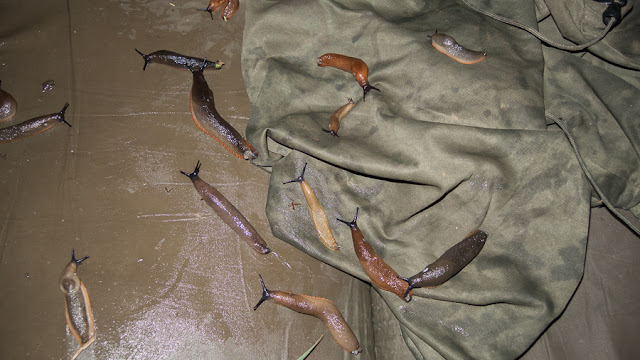 As this was just a taster session I was going to pack up at midnight no matter what. When I did I spent a minute or two ridding everything of the slimy pests. They were on the mat, the rucksack, my chair and sling. Two had even got inside the mesh pocket of the sling. I expect that's where they'll end their days.

Email ThisBlogThis!Share to TwitterShare to FacebookShare to Pinterest
Labels: barbel

It's unlike me to rush building rods but this year I've got ahead of myself and made a start on a few builds only for my customers to change their minds. Throw in a cancellation and a cock-up and I have a few fully built rods for sale. The list can be found here: http://www.dlst.co.uk/stock I won't split matching sets, but any rods ordered from the list during July will be carriage paid.

I was concerned that starting my eel fishing early this year might lead me to burn out before high summer arrived. I think it has. My last two sessions have resulted in one small eel and a blank. neither result encouraging me to have another try. Things are so bad I'm almost thinking of having a try for the vermin again! Or maybe I'll get some bream fishing done? Neither option is really filling me with enthusiasm.

With the rod building supply situation as dire as ever I have a stack of blanks sitting idly awaiting either reel seats or rings. Of the dozen I've put some cork on only two can be finished off until something arrives. I feel like I'm banging my head against a brick wall...

In an attempt to get round this blockage I ordered some rings from the USA. While I was browsing the website I bulked out the order by adding some stuff that isn't available at all in the UK. One of these was a spool of cord sold for wrapping around rod blanks to form grips. I'm not sure if it's an aesthetic that would work on our sort of specimen rods. As an experiment I've tried it as a grip on one of my landing net poles along with a colour combo of thread I quite like. 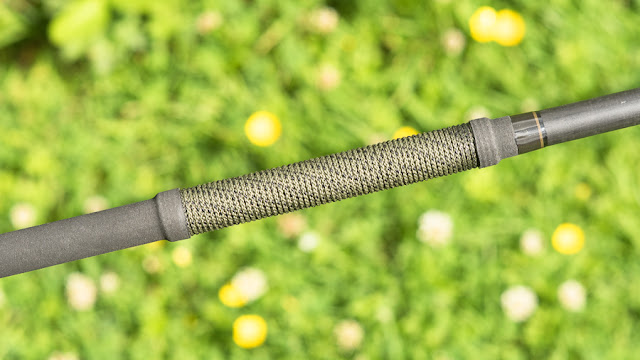 The first test match starts tomorrow. That might perk me up. Or not...