For the first time in ages it stopped raining yesterday. What's more the temperature rose with a moderate southerly wind. It had to be worth going pike fishing. Even so I still left the umbrella in the quiver. Taking it out would have been tempting fate. I did risk it without my waterproofs though.

Working on the basis of doing things differently I started off in a swim I usually end up in at dusk. One bait in the 'hotspot', one chucked the the site of a lily bed and the third under a drifter float.

It's not often I get a favourable wind for drifting other than over open water so I haven't had much chance to try the float I made a year or two back. It's based on the Colin Dyson design from way back when. The idea being to have a float which I could swap from my bottom end floats when float-legering. In place of the two map pins which the original used as a clip at the top of the float's body I have a line clip from a bobbin. The stem is a bit of broken rod tip, the vane a plastic loyalty card or something covered in dayglo gaffer tape and rod varnish! There's a swivel attached to the end of the carbon stem by some glue-filled shrink tube. 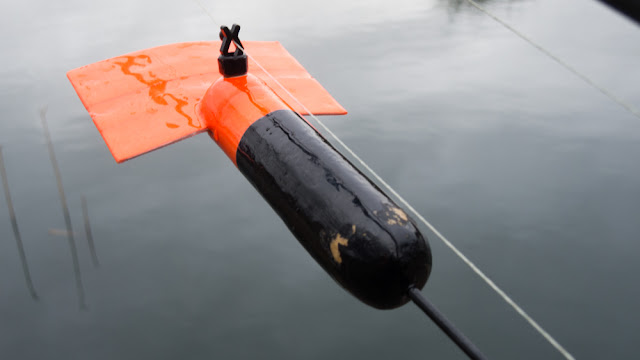 To swap from float-legering to drifting I swap the bottom end float for the drifter, unclip the lead and clip from the top of the trace, and put three very big split shot on the trace wire. For drifting small waters the set-up works well. At least it drifts the bait. I didn't find out how the pike react to it.

Although the drifting exercise proved fishless it did find me a feature I wasn't aware of when the bait ran aground. So the time spent wasn't wasted. 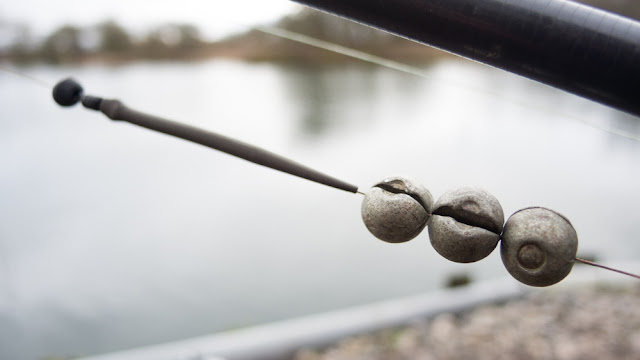 After an hour I made a move to another swim which I often end the day in. Here the wind wasn't conducive to drifting and teh rig was swapped back to a float-leger. A bit of bait twithcing and recasting for a little over an hour and I was off again, uncertain where to go next.

No fish bay seemed as good a place as anywhere. Like a fool I didn't fish the bank where the wind would have been off my back but the opposite side. Although the air temp was high the wind had picked up and its chill factor had too. Everything was looking good for a run or two at dusk, or maybe into dark. But it wasn't to be.

Apart from robins singing and chasing early on and the occasional chinking of a great tit suggesting spring might be approaching there was little in the way of bird activity. Ducks, coots and grebes weren't in evidence on the water. They were either skulking in the reeds or roosting in the snag trees. Little waterfowl activity often seems to go hand in hand with an absence of pike from the landing net. No fish bay lived up to its name and I gave up on the idea of stopping a whole hour into dark watching the starlights on my floats. 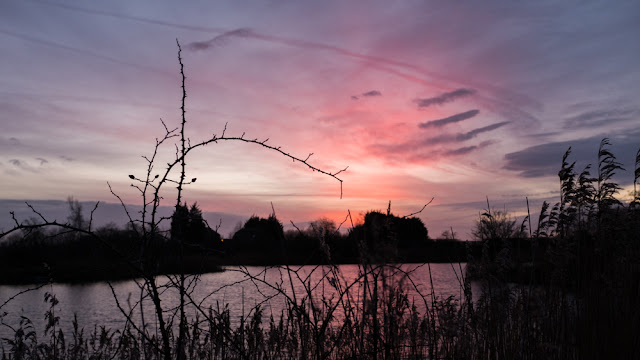 Owing to the fact I have far more rods than I actually need, and that I have at least two sets that would do the same job, I'm parting with my 11ft 3lb Torrix rods. I built them for my short lived carp 'campaign' in 2016, for which they were ideal. As that is well and truly behind me, and because I found them best when casting a lead and small bait, they are surplus to requirements. 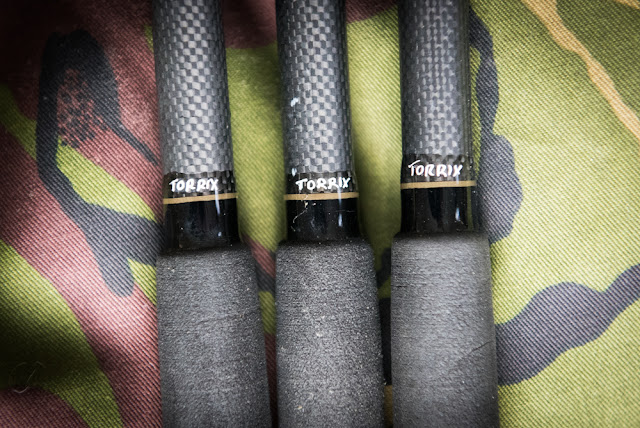 As rods I really like them, they are light, well balanced, crisp in action. They were my eel rods last summer but for pike fishing I found them too tippy to use with half baits or heavier, and for playing pike and catfish the same applied. Stick a two to three ounce lead and a small bait like a boilie or a roach head on, though, and they cast like a dream. 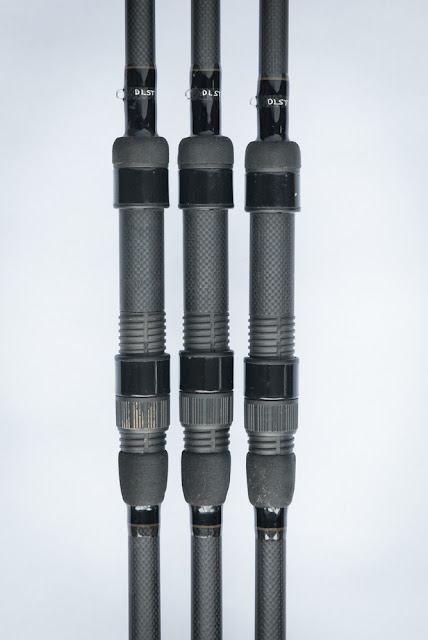 The build is as shown. Fuji reel seat with carbon insert, abbreviated Duplon, Alconite rings (30mm butt to 10mm tip, Rover spacing), black thread tipped with khaki at the handle, hook keeper on the left. Butts and tips are numbered with dots (0, 2, 3 for some reason!). 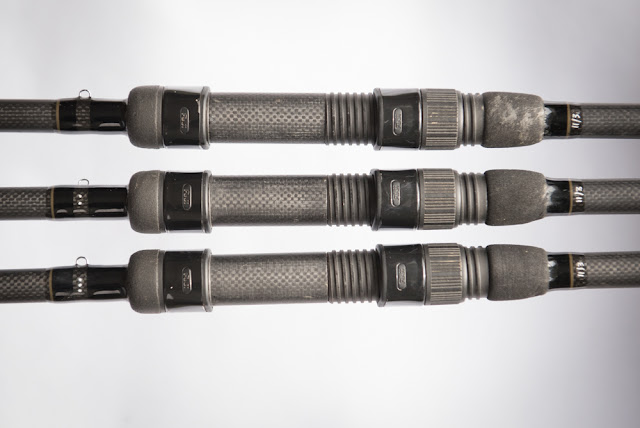 The RRP for a factory build on these rods (Kigan rings, plain reel seat) is £252 each. This build  would be similar. I'm selling these three for £530 including carriage.

Email ThisBlogThis!Share to TwitterShare to FacebookShare to Pinterest
Labels: rods for sale

For once both the UPS and Royal Mail drivers arrived earlier than expected. Early enough for me to throw the pike gear and some baits in the car and get to the water with plenty of daylight remaining. Even better was that the day was fairly mild, with no wind-chill. If it stayed that way I could fish an hour or more past sunset. So far so good. My usual plan hit a brick wall when I found the swims I usually end up in during my roamings were all occupied. I'd have to try something different. The area I fished on Christmas Day didn't appeal, and I didn't fancy a long walk either. Off to a swim I have fished a few times with success.

Faced with open water the third bait usually gets whacked well out and sort of twitched back. The other two fish the obvious feature. The margin. Had there been more wind I'd have got my little drifter out for a play, but that wasn't an option. As I was planning on stopping into dark I left the Mk2 night floats on. 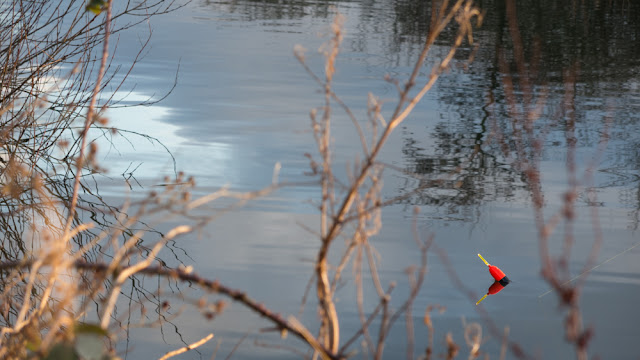 Despite the conditions feeling favourable I wasn't happy with where I was, even though I repositioned the baits after twenty minutes. I wasn't all that confident of the rather skinny bluey I had on one rod, nor the lamprey tail on another. I moved early to a swim which had yet to produce a pike for me, as in one banked. The first time I dropped a deadbait in the left hand margin it was taken quickly by a pike which felt a fair bit bigger than the mid double I'd put pack in another swim a few minutes earlier. That's what keeps drawing me back to the swim.

I left the sardine I'd been fishing in open water and cast it to some far bank willows. Then I put a fresh lamprey head in place of the washed out tail section, which I chopped into four pieces and scattered around the head section after I'd swung it into the margin on my right. The bluey was replaced  with a small, but cucumber-smelling, smelt and dropped to my left. The sun came out.

One of the night floats I'd painted black and made a 'sight bob' for it by wrapping dayglo gaffer tape around a dead starlight. This actually showed up quite well at a moderate distance, better still at close range. None of the floats moved. 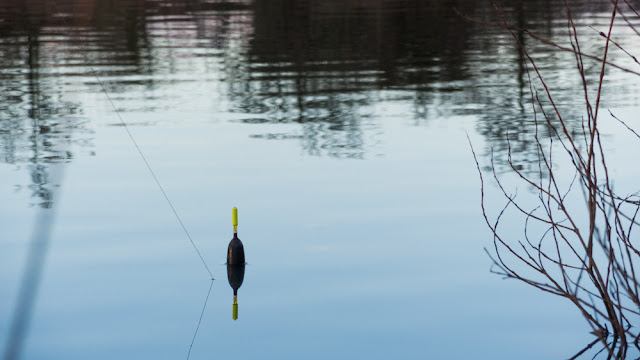 I sort of had it in mind that if any of the other anglers packed up before four o'clock I'd make a move. In the end I didn't. It seemed like sitting it out in this swim until the usually productive time when the light began to fade might be a good idea. Usually I move out of this swim to a 'banker' for last knockings. Maybe that's why the swim had never produced.

My head torch was out of the rucksack ready for action when the horse needed watering. Cue the sounder box to do what it's supposed to do... Dash to the rods and it's the lamprey head that's away. At the start of the winter I loaded one reel with Asso Bullet mono to see how it behaved. So far my few sessions proved that it cast and spooled okay, but it hadn't been tested with a fish. That was about to change. Turn the reel handle and wind straight into the pike. No problem. Another four or five pounder was coming in easily. Not much of a test for the line. I reached back and grabbed the net, sliding it forwards into the water. Now the jack was under the rod tip but for some reason was refusing to pop to the surface as I bent into it. A lunge and a swirl and I realised it wasn't a jack at all!

The first glimpse I got of the fish suggested a scraper double. A lightly hooked one at that with the lamprey section flapping around from the top treble well outside the pike's mouth. Sink the mesh and give the fish some rice. Job done. A quick look suggested eleven pounds before I wedged the net to retain the fish while I got the unhooking gear and scales sorted.

Lifting the fish ashore in the net it felt a bit heavier than my guestimate. On the mat the hook fell out. In the sling the needle spun round past six o'clock. The fish being lean across the back was what fooled me. Nicely marked and conditioned, with room to fill out before spawning she was lively on her return to the water. 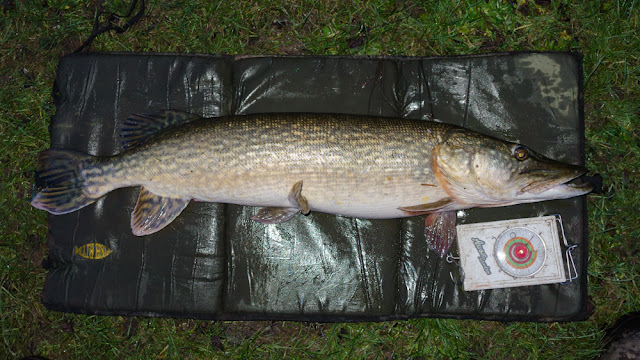 I sorted the usual mess out then sat back to watch the starlights get brighter as the sky got darker. Although the air temperature had dropped markedly at sunset it didn't feel too chilly. I was quite comfortable in my bunny suit. If it hadn't been for hunger I might have stayed longer, but by five fifteen my belly was complaining.

It just goes to show that you shouldn't write a spot off until you've fished it at the most productive times. Common sense really. However, the temptation of fishing a swim which has produced on a regular basis is difficult to stay away from. It can be a bad habit to get into, though. I'd caught a first pike from a 'new' swim and a first on the mono. I'll keep on with the mono until spring, then I might use it for eels. Quite why I'm not sure when braid has so many advantages for predator fishing. I guess I just like experimenting. 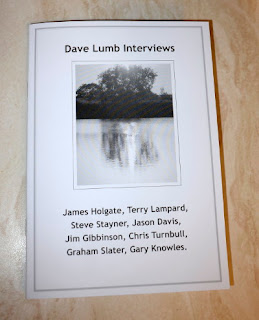 It's not often I sell things on this blog, but I have a 'new' book available. It's a collection of interviews I conducted when James Holgate was editing Pike and Predators and Coarse Angling Today.

Sadly, James is no longer with us, nor are the two magazines which he was responsible for founding.

I like to imagine that he would have approved of the simple and cheap black and white 'zine', 84 A5 page, format I have used as it is reminiscent of the Castabout guides which began his involvement in the world of angling publishing.

Due to popular demand I also produced a limited, paperback, edition for Pikers Pit members which sold out before publication!