The weather forecast lived up to itself. Thursday was warm and humid promising to stay that way into dark. It had to be worth a shot at eels again. If that wasn't enough I also had a new pair of boots to try out.
I arrived with great expectations about half an hour earlier than I needed to as I had nothing else to do. A short walk saw me pretty much decided on fishing a swim I've fancied for a while but always shied away from at the last minute because it's a bit tight to fish. Less overgrown at one side. Back to the car for the gear and I was ready to get settled in.
The rod quiver was dropped handily on the bank above where I'd set the pod up while I got my chair and rucksack in place. Reaching for the quiver to get my pod out I saw it was crawling with ants! hundreds of the busy little buggers. I brushed a load of them off and put the quiver on the other side of the swim. Then I moved my bag and seat out of ants way.
By the time I had the pod up and the rods out the ants had disappeared. They must have been disturbed by the quiver landing on top of their nest. At least I wouldn't have to spend the session sweeping ants off myself and my gear. Even so I had the itches for a while! 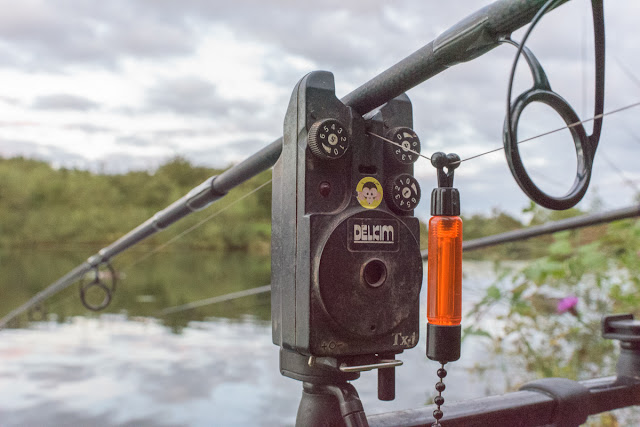 Once more I stuck to the usual two rigs. The off-bottom worms went to the pads on my right and the legered squid section straight out on a decent cast. Once more I found myself surrounded by those daft mallards. I'm sure they weren't in the swim when I had a look at it on my inspection walk. 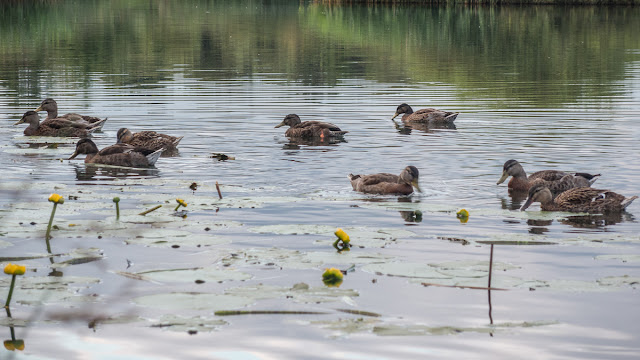 By nine thirty it was getting dark and I hadn't had a single sign of an eel taking a fancy to either of my baits. Time to refresh and recast them. Still nothing by ten when it was properly dark. It was twenty past when I had my first tentative take to squid. That didn't signal the start of activity. The moon had risen by now so I got my camera out and started playing around with it to keep my occupied. 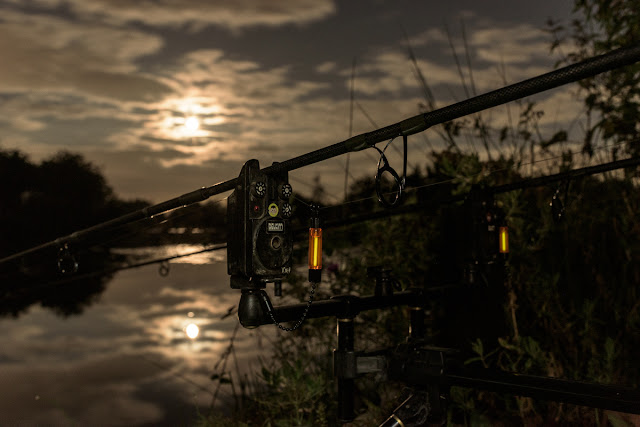 This meant a take would be imminent. It was. At 11.20 line was taken from the reel with the squid on the end of the line. This take was met by a strike which removed the bait from the hook. No eel hooked, of course. A brief flurry of two runs to the same bait followed over the next half hour. All frustratingly missed.

There didn't feel to be any wind yet the clouds were moving fairly quickly across the moon as it slowly rose and swung to my right. I put the camera away and waited for more action.It wasn't forthcoming though. Midnight came and went. Another half hour. If there was action before half past I'd stop on until one, or longer if the action continued. If there were no more indications I'd give up. 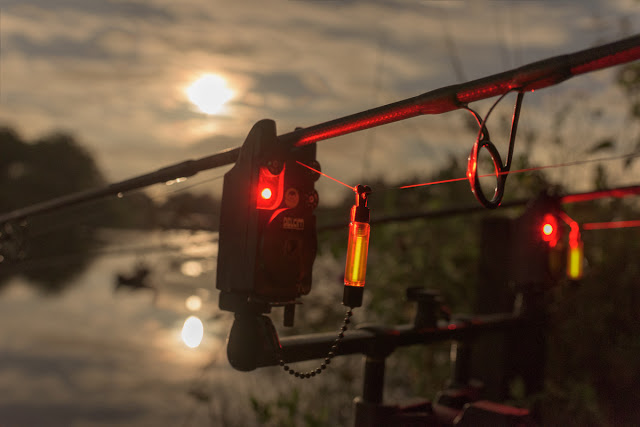 Sure enough I gave up. Conditions seemed ideal, although maybe the moon was too bright (he said clutching at straws) but again there was not much eel activity, and again nothing to speak of to the worm bait. In some way this is good because it means I'm not up and down wasting bait all the time. I'm wondering if the bootlaces have done a disappearing act. Daft as it sounds I'm contemplating an afternoon eel session. When I was a kid we always fancied our chances of catching eels on lobworms from the canal on red hot summer days.
The new boots didn't get much of a testing. They'd been comfortable worn round the house for a couple of hours. I didn't walk far enough to find out if they'd rub my feet but I wasn't aware of them while I was fishing. This morning I went for a walk of over three miles in them and the result was the same. They felt like I'd had them for ages.
Looking back it was only December 2018 that I bought my previous pair of boots. I'd have expected them to last a bit longer before leaking, even given my lack of care given to them. That said the tread is almost worn out in places too, so they've put in a good few miles I suppose. They were Harkilas. A brand I'd had before and found wanting after twelve months. I guess I should have known better but it was a case of needs must and a local supplier.
This time I did some research by asking the combined wisdom of  The Pikers Pit what they'd suggest. Two people (who I know in the real world as well as virtually) and one cyber-aquaintance  recommended Alt-Berg boots. I surfed on over and browsed their website. I knew what features I wanted in a boot and the Warrior Aqua looked like it met them almost perfectly. For some reason the idea of buying military boots struck some Pitsters as amusing. I don't know why, these boots miht have a militaristic name but they look much like the stalking boots I usually wear which I prefer to those marketed for hiking. I like a higher boot than walkers as there's less chance of rain running down overtrousers and into the boot.
Alt-Berg offer a fitting service, either at their factory or at approved stockists, but with the current Covid situation and the distance involved I decided to take a punt and order on-line. As the boots are handmade in Yorkshire (spit...) they aren't all available in all sizes off the shelf. There'd be a wait of a few weeks. I'd have to suffer wet feet for a while longer.
As there is a discount code provided if you sign up for the Alt-Berg newsletter I did just that. I also ordered a boot care kit. It remains to be seen how much use the care kit gets... 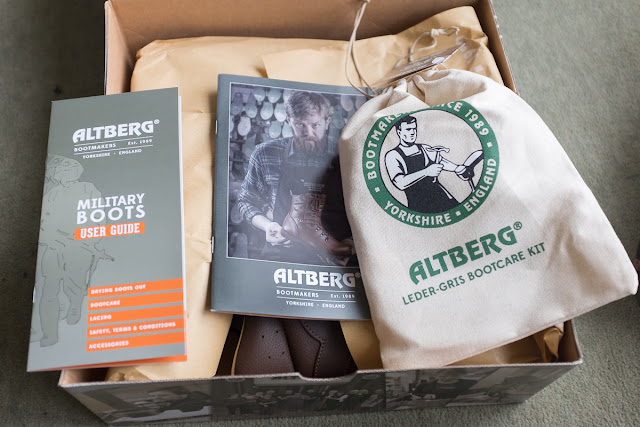 For British made footwear the prices are remarkable, and for people who can keep the uppers in good repair they offer a resoling service. 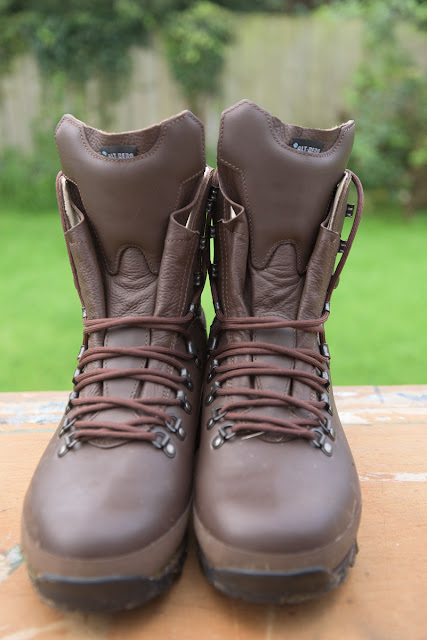 The new boots are a little higher than the ones they're replacing, but a smidgen shorter than the Le Chameau's which preceded them I liked the Mouflon's a lot so these Warrior's should suit me. And they are considerably cheaper than the Le Chameau's.
As already stated, they've been comfortable from the off. One thing worth noting is that I took the advice of one Pitser and ordered larger than my usual size. He suggested a whole size larger for wearing with thick socks. Alt-Berg recommend a half size extra for the same. As I've stopped wearing thick socks in boots I went for the half size extra and I'm glad I did. those are my initial impressions. How long they last before succumbing to the Lumb Lack of Boot Care regime remains to be seen. I'm full of good intentions to lovingly wax them whenever they need it. But...