A funny session on the Trent. River up a foot or two maybe, but fairly clear. Overcast and raining but mild despite the wind coming from the north. A late start around four pm and the first fish was a chub of four pounds that I found hanging on the end of the line when I wound in!

Chub knocks were the only signs until a 'bream bite' signalled the arrival of an eel of about a pound. The next 'bream bite' resulted in hooking a very odd feeling fish. Bream? Maybe, until it popped up on the top and in the light of the head torch looked a bit wriggly, then it took some line and splashed on the surface making me think it could have been a chub. So I was surprised when the head of a barbel came over the net, but what a strange looking fish! In apparently well fed condition, and apart from its deformity healthy looking. It weighed seven and a half pounds. On release it's peculiar swimming action made it obvious why it felt so weird when I was playing it. 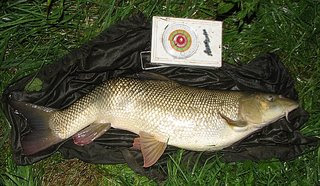 After that a 'barbel bite' resulted in a fish dropping off and a missing boilie, and the next cast produced a 'bream bite' and a bream. Another 'barbel bite' was connected with briefly, but this time a chewed boilie came back. Hmmm. I moved one bait downstream of where the bites had been coming from and within five minutes yet another 'barbel bite' was had. This time the fish stayed hooked - and turned out to be another four pound chub. At which point I called it a night.

I don't know why Trent chub behave like this when Ribble chub are more traditional in their refusal to give 'propper' bites when using hair rigged baits. And Trent chub seem to make a better effort at fighting back than their Lancastrian cousins.
Posted by Dave Lumb at 10:12 am

I've had a couple of sessions on the Trent since the last entry. A few barbel-less hours on a Sunday evening, and a full day on a stretch I hadn't fished before.

The second session resulted in one small fish landed and one good one lost to a 'hook pull'. One of those inexplicable cases of a fish having been on for a while and almost ready for the net when it just came adrift! How do they do that? The method was the good old mesh bag of pellets with a boilie on the hair.

A week later I headed back for a longer session, albeit with a delayed start. Setting up around three in the afternoon I was on the feeder with hemp and groats bound together with a new groundbait I had been sent to try out. The river was up a couple of foot or so, and rising slowly with a nice touch of colour. Despite the sunshine I was confident. A few chub rattles were had, when eventually one managed to hang itself on the down stream rod.

At five pounds seven ounces it was worth having - although chub never look 'big' in photos). 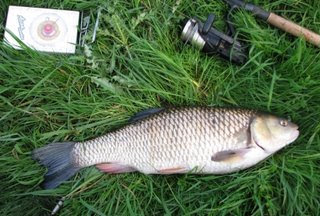 This fish came around an hour before dark and it was about three hours later that a small barbel picked up the upstream bait, two boilies on the hair. Another, but smaller, chub came along around nine forty,and shortly after that I decided to get my head down for the night. It was still mild as I turned in, but with fog forecast for the morning.

Friday the thirteenth dawned to the forecast pea souper which made the short drive to another stretch difficult with a windscreen that refused to demist - I missed the turning to the water at the first attempt and almost overshot it at the second attempt! Getting there early gave me a good choice of pegs and I got the one I fancied. The approach was the same feeder based one as the day before. With the level up it wasn't possible to fish as far out as I would have liked, even with five or six ounces the weed build up on the line made keeping a bait in place for long difficult.

The fog was slow to lift, only clearing around midday but by then I had landed four barbel in the five to six pound range - all coming to the downstream rod. After a flurry of three fish in half an hour I was thinking along the lines of Friday 13th, fishing peg 13 and catching thirteen barbel to thirteen pounds. But four was to be the limit.

I fished into dark without a bite until a chub of around three pounds committed suicide as I was packing up.
Posted by Dave Lumb at 8:26 pm