The heatwave, a backlog of rod builds and a general lack of enthusiasm for fishing has seen me indulging an a lot of slobbing around wishing it wasn't so hot, and a bit of photography.

Some of the rod builds have been custom hobs involving thread colour combinations and other adornments I was a bit unsure of. One of these combinations I knew would look quite tasteful. The cork 'cone' foregrip, lengthy inscription and Union Jack I was less sure of. It turned out better than I'd imagined. Maybe it was the slim aluminium collar which set things off.

I've used white as a tipping colour once before and it turned out better than I'd expected. But with purple thread I was less certain. While there is a bit of a Cadbury's Dairy Milk look to the finished article, it really isn't bad. 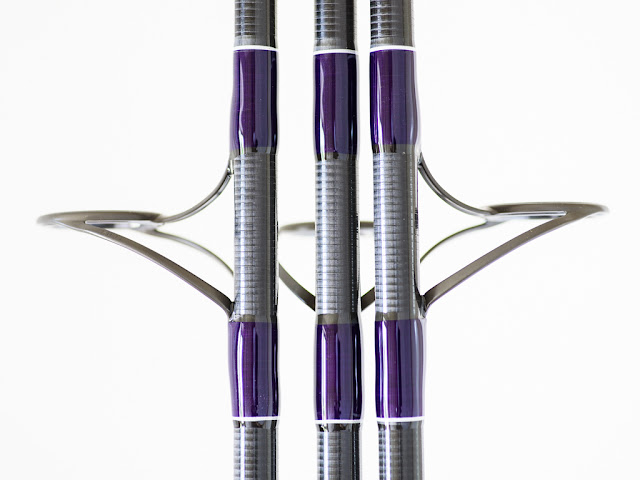 The downrigger rods are now done. These were a challenge of a different kind as I'd been asked to match the handle on an existing rod. With a bit of ingenuity I managed to customise some preformed corks ordered in from the USA and get within a gnat's whisker. The thread colour in this instance I knew would look okay.

Back in the mists of time I read something where the author said that carbon had been invented too soon as it put an end to the development of fibreglass as a blank material. E-glass was just starting to be used when carbon ousted it. These 9ft 6in downrigger blanks are E-glass and they'd make great carp stalking rods. But nobody would buy them because they're fibreglass.

While the outside diameter of the blanks is greater than a carbon blank of similar action there is no increase in weight. Not that I directly compared these blanks to anything they are much lighter than thick walled old style glass blanks. The taper is medium fast, giving a sensitive tip with power low down but with a medium/through action. All academic though as carbon rules the rod roost now.