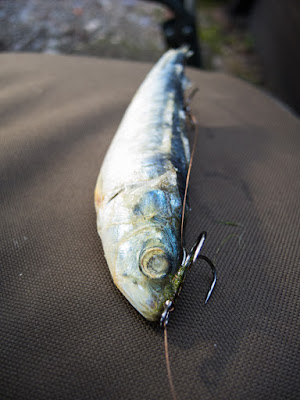 That must have been the longest I've gone without fishing since 1982! A combination of a lack of enthusiasm and the bloody awful weather mostly being responsible for it. With the days getting shorter and the clocks altering I began to think about pike fishing, but every time I felt like getting the rods out something cropped up to prevent it happening. Today almost went the same way as I was in the middle of my lunch with the pike rods assembled ready for rigging up when someone called round to throw money at me.

Then it turned out I had no traces made up, which slowed down the rigging up process. Finally the freezer was almost bare. I like to have three different baits out when I don't know if the pike are showing a preference and apart from two trusted baits all I had were hated sardines. I just don't get on with sardines despite almost every other piker in the land loving them to bits.

Despite the minor setbacks I managed to get three baits out by ten past two. With it being mild I was prepared to stop a little into dark. So I could get over three hours fishing in. Plenty of time for a couple of moves.

Being too lazy to tie the sardine to the trace I stuck the size two treble in its skull and the smaller one down it's back. Hooked this way sardines can be recast a few times without bursting or falling off the hooks.

After twenty five minutes I saw the float on the sardine rod wobble and fall flat. Amazing! The fish was doing nothing but kiting in towards the bank to my left making it difficult to judge its size. When it hit the margin it woke up and clearly wasn't huge. It was lightly hooked by the top treble, the other flying free. Safely netted it thrashed about and unhooked itself for me. 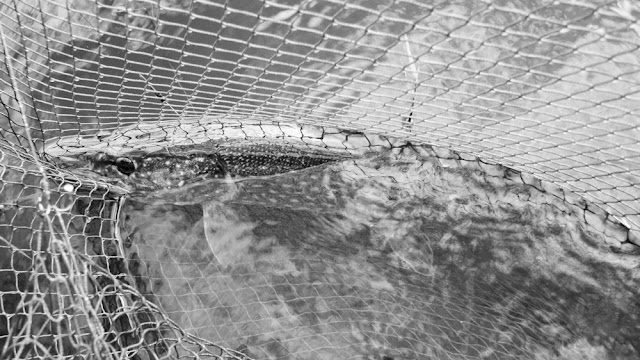 My plans for moving swims got thwarted when someone turned up to chuck lures around in the swims I wanted to move to. When he had left at four I made my one move of the afternoon. The light had pretty much gone, in fact I had just put my head torch on my head, when the lamprey set off steadily. This time my strike met no resistance at all. I have a sneaking suspicion the culprit wasn't a pike but an eel. The spot I had cast to is pretty reliable for eel action during the summer and the water was still pretty warm to my touch. Whatever it had been, the bait was unmarked.

Half an hour later I was on my way home thinking of easy ways to make night floats for piking. The mojo might be making a comeback!