Everything merges with the night 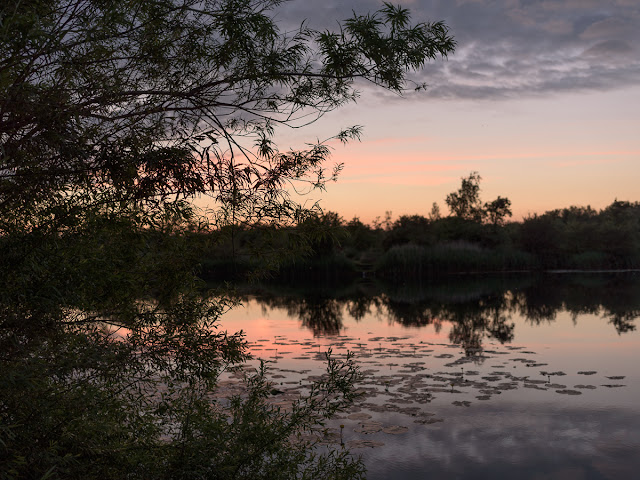 After my last blog post I thought the rot had set in when I blanked on yet another evening into night session after eels. I had runs and missed them all.
A couple of days later and it was back to the familiar sessions of old. Lots of twitchy bites and some runs, this time some I connected with. During this session I was getting far more positive runs than I had on earlier sessions for some reason even though the eels were no bigger. In total five were landed, but nothing over a pound and a quarter. I weighed that one because it had felt double the weight when I was bringing it in and I wanted to get a gauge for future guestimates. It didn't look the heavier weight though. I'd been fooled by teh lad link of the running paternoster dragging a load of weed.
Each time I've gone eeling I've fished a different swim. A week later I was in a swim I'd forgotten had an ant nest in it last time I fished it. Luckily the ants weren't making themseleves known if they were still at home. The eels weren't either. It was a slow session resulting in one more sub-pound eel to the off bottom worms. I got more bites from the mozzies. The following morning my hands and back of my neck were covered in itchy red lumps.
Two days after that, when the itching was easing off, I fished a swim I like a lot, but which has never matched it's initial promise. It did produce though. Four more eels not worth netting, never mind  photographing, fell to worm baits with one bumped to a deadbait. Most of my action has been coming to worms, but I've been putting that down to me fishing two rods with them as bait and only one with a deadbait chunk. 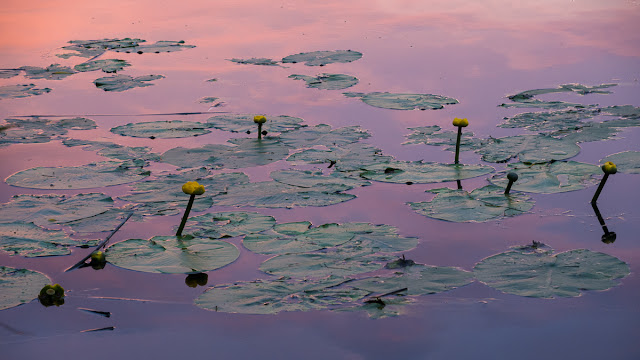 Fancying a change of approach I picked up a packet of squid and settled into a swim I've never fished before for my first session of July. There was a glorious sunset casting a red glow on everything, including the moorhen which seemed to want to join me. I was wondering if I had taken up it's night time resting place, and if it was a young bird because of it's lack of fear of the big ugly creature on the bank.
My landing net must have been propped up in its usual hauling out spot as it  clambered on the bank and tried to walk under the mesh. After drifting about in front of me for ages it got out at the other side of the swim. It wasn't keen there so ambled back to the water, where it eventually gave up, after squawking loudly at me from within the reed beds and making me jump! 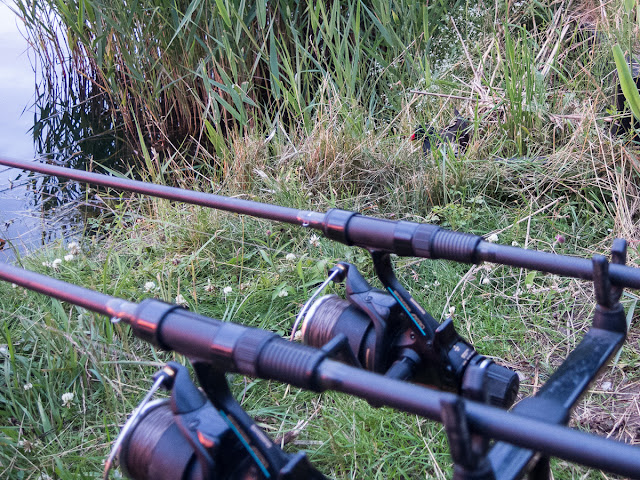 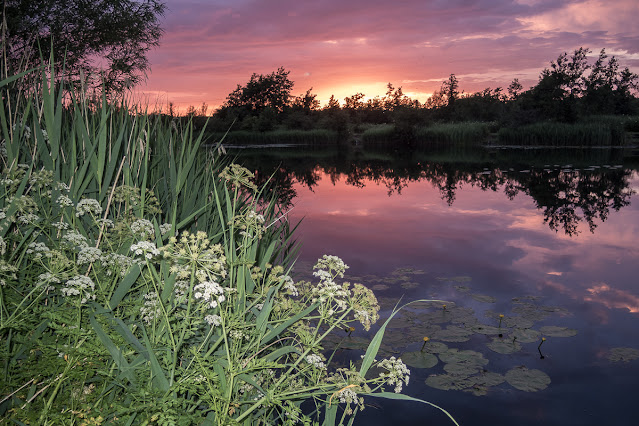 The moorhen interlude was the highlight of the session. When I checked the weather forecast before setting off it had looked set fair. However, when I spoke to another angler near the car park he said there was rain forecast to arrive around dusk. The sky did look slightly threatening and it felt muggy. I always have a set of waterproofs in the back of the car so I stuffed them in my folded low chair. It was around ten thirty when the drizzle started. Five minutes later I missed a run to the squid chunk.
That didn't herald the start of a mad feeding spell. At eleven fifteen yet another bootlace snaffled my off bottom worms. With the rain getting heavier I packed up shortly after that. One benefit of finishing early was that I didn't need an afternoon nap the next day!
All these short eel session are starting to merge into one fuzzy session of missed runs and small, slimy knot-tying eels. Without my diary notes I'd never remember what happened on which session, or how many sessions there were! Still, I was back again last night but this time in the first swim I'd fished this year. 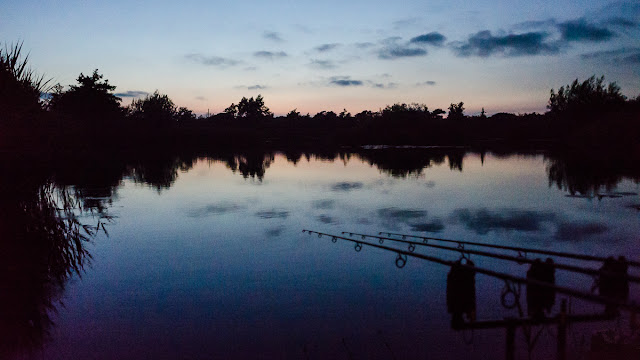 This turned out to be another slow session. Proper runs were few and twitchy takes the norm when there was action. The only take I connected with came to a piece of squid fished close in to the edge of a reed bad. It was yet another bootlace which somehow managed to tie the rig and itself in a great slimy tangle when I foolishly netted it. Things were so bad I had to cut the line and the hooklink to get the eel free. I did get the hook out of the eel - somehow. If eels weren't supposedly endangered (there seem to be plenty round here!) I think I'd be sticking these bootlace tangle-masters in the freezer for pike bait! 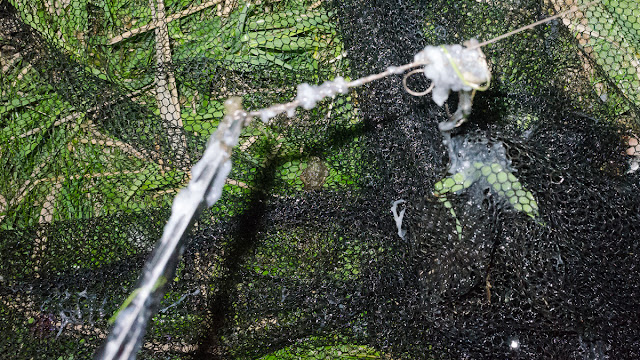 Despite the frustration having returned I'm sure I'll be back again soon. At least for one more try. If it's another bootlace-fest I might give the eels a break for a week or two and try for something else.

I had intended posting a rod advert on here, but no sooner had I listed it on The Pikers Pit than it sold. Which surprised me as it was an 11ft 1.75lb Torrix more suited to small river barbel or stalking carp.

I'd ordered the blank for myself during my summer of carp fishing but it arrived after the short-lived interest in carp had faded away. Hence I only got round to building it recently. Actually I started it during lockdown one but gave up when paying work started coming in again. As I'm in a lull at present waiting for blanks ordered months ago to turn up I passed a day finishing it off.

It's a shame that Harrison's aren't supplying brown blanks any longer because built up whipped in sand tipped brown they look rather nice. The newish Vortex rings also look good on slim blanks like the lighter Torrixes.

As I spent some time trying to take some vaguely professional looking photos of the rod (shiny things are tricky to photograph) I'll post them anyway - despite the fact I can't replicate the build. 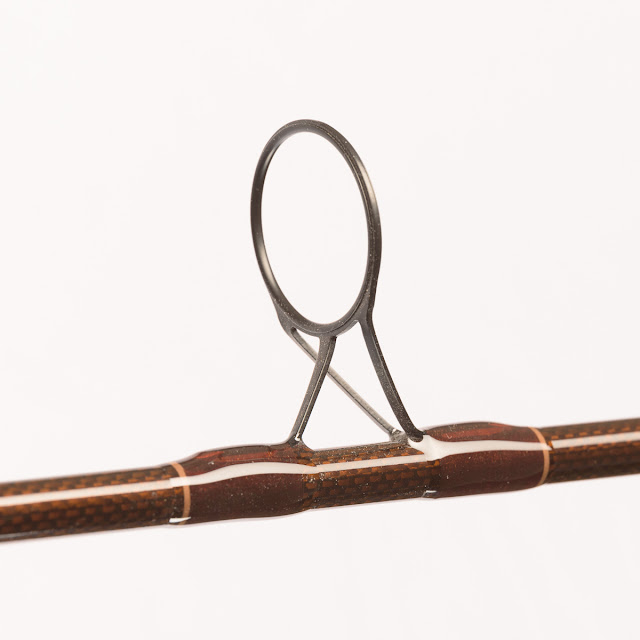