It was another case of nothing caught and nothing worth writing about from my first session in February. The day was a rare fine one between many wet ones. Although conditions appeared good there were no signs of fish life. Yesterday was the sort of February day that makes me feel positive. Dry, almost windless with sunny spells which warm the air. Best of all now the sun doesn't sink out of sight until almost six, and there is light to see by later than that, it means that if the UPS van arrives in good time I can still sneak a few hours fishing in.

The baits were in the water by half past two. I'd already seen a couple of small fish top as I walked to my swim. This wasn't my first choice, but after dropping my gear in my intended spot I had a wander along the bank. The trouble with such a day being that ever swim looked inviting in the sunshine.

For some reason I find sunny days at this time of year good for pike fishing. In summer or winter bright sun seems to be a turn off, but maybe there's a warming effect in February and early March. The frogs which have returned to my pond certainly make their presence known when the sun shines on the pond. Sticking their heads out and croaking until the pond is in shade once more. It hadn't been a half hour when the right hand margin rod, fishing a lamprey head, was in action. The pike didn't fight, just tried to hold station with it's gob open making it feel bigger than it was. If I had no more action it had been worth getting out of the house.

I worked up a bit of a sweat with the unexpected activity and removed my fleece. It was almost warm enough to bask in the sun without the bunny suit.

That didn't last long and as soon as some clouds drifted across the sun I needed the fleece again. Zipping up the bunny suit was in order too. Disaster. The two way zip has been dodgy for a couple of years. Both zippers had to be pulled right to the top before the zip would close as the lower one was drawn back down. This time the upper zipper came off the rails. Pulling the bottom one up and back down closed the zip, but it wouldn't stay closed. Not reliably. Thankfully it wasn't icy cold.

About an hour after the fish I had a move. Again two baits were placed in the margins and the third one cast to a far bank feature. The sun made a reappearance. At four thirty the marginal headless joey mackerel moved off, but was dropped before I got to the rod. More action in two hours than my previous two trips!

Mallards were courting, buzzards mewing and soaring, a magpie cackled. Winter isn't over just yet but it's on the retreat. There's a rear-guard action forecast for the next week, but that won't deter the daffodils shooting through.

Five o'clock was my next scheduled move time. I picked up the lamprey rod and the bait jiggled through what felt like a sunken branch and went solid for a split second before the branch started to shake its head. At first I thought a big unseasonal eel had picked up the bait but the spotty flank rolling on the surface put that idea out of my head. I never have pike take baits as I wind them in. I have fished with someone who had the knack of making this happen on a regular basis. How, I don't know. This time the scrap was a good one. I kept the rod low in an attempt to stop the pike thrashing on the surface, and struggled to get it in the net. 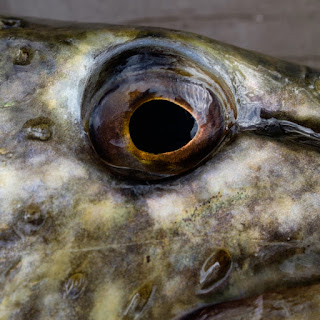 More chaos ensued as I struggled to untangle a mess of mono which had sprung from the reel before I could get the pike ashore to weigh.

I've had this mono (Asso Bullet) on one reel to see how it performs. It's not caused me any problems. It knots easily and reliably, and despite the episode just mentioned isn't as springy as a lot of nylon lines. Part of the problem I had was the reel being out of gear and turning backwards - throwing line from the spool. After this winter I'll be back on braid on all my pike reels though. The mono is for a water which bans braid, an the Bullet will do the trick there. I might even use it on my eel reels this spring/summer.

With the pike returned and the mess sorted out I started to gather my stuff for the move when the sounder in my pocket bleeped. The mackerel was off again. This time I connected. A lively jack was soon unhooked in the edge. Two rods out of action in five minutes almost tempted me to stick in the swim a while longer. The final spot of the day was calling me. It was the one I'd planned on fishing first, after all.

Another sign that spring is on the way was the evening chorus. There was a joyous cacophony of birdsong as the sun began to lower in the sky. Blackbirds, robins, great and blue tits all staking claim to territory and trying to impress potential mates. I spent a few minutes listening to the last of an invisible song thrush's song as the light eventually faded. It was easy to believe the bird was thinking about its improvisations, subtly modifying phrase after phrase with additional trills and warbles as it repeated them. The song ended as the light went. It had made me feel happy and content. I wasn't bothered that the final move of the day had produced no more fish. It was time for home.