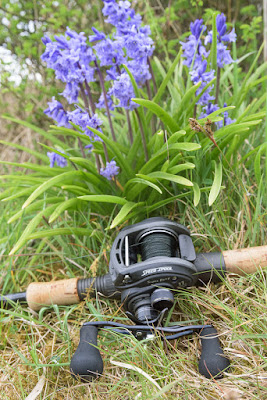 For the first time in ages I've felt like going fishing. It took me a while to get some lure gear sorted but eventually it was all ready. I don't know why but I'd got this idea in my head that I ought to move with the times and use more modern reels than Ambassadeurs. The current generation of low profile baitcasters look more ergonomic and practical when considered objectively.

Years ago I used one or two low profile reels and liked them. Apart from the thumbars... The new designs look to have better placed thumbars. The biggest stumbling block is being out of touch with what's what and then there's the price. Larger ones can run to two or three times the price of a 6501!

Luck was on my side because I know someone who works for whatever the empire which owns Fox International and a load of other brands is called this week. There were some Lew's reels which looked like they might be worth a chuck. I managed to borrow one of the larger reels and once I'd sorted the birdsnest out that it came with I was raring to go.

Having a roughly 5501 Ambassadeur sized spool I put it on a Trickster L and threw some smaller lures in a box. Lures I used to use on the canal. Old school lures - six inch Jakes and Grandmas, L'il Ernies, 1oz spinnerbaits. I thought these might give me a better chance of connecting with a pike of any size. 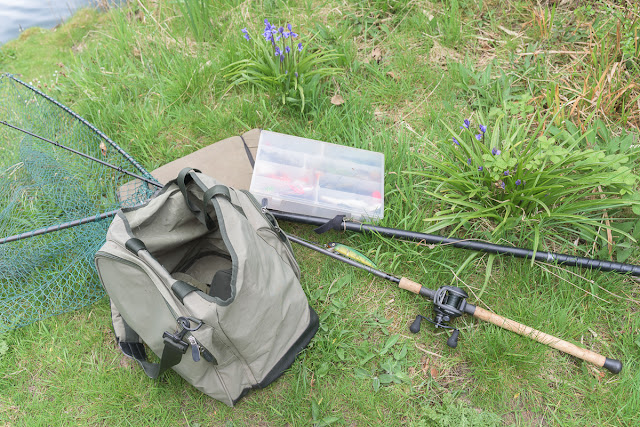 When I travel light with lures these days I use my old Korum bait and bits bag, fondly known as The Shopping Bag.Side pockets hold sling, scale and unhooking tools, everything else gets dropped in the main compartment for easy access. The everything else being lure box, camera, drink bottle and lead bag containing notebook, permits and some other bits and bats. An unhooking mat is clipped to the bag and with net in one hand and rod in the other I'm mobile for a couple or three hours. 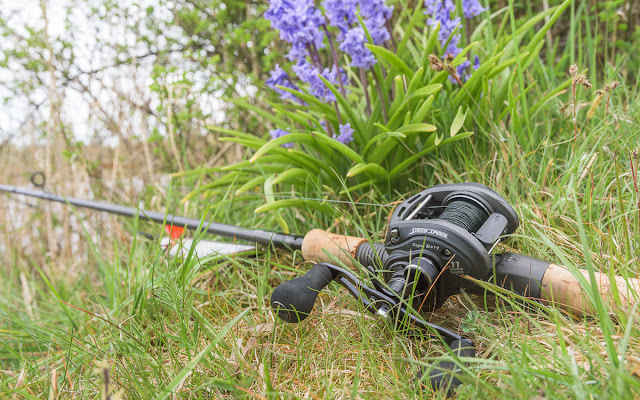 Spring was definitely in the air. Chiffchaff's making their monotonous but cheery sounds, blackthorn blossom on the fade being replaced bu fruit tree buds bursting open. Lilly pads were up, but not fully. A pair of great crested grebes were patrolling the open water. With a light ripple on the surface things looked promising. 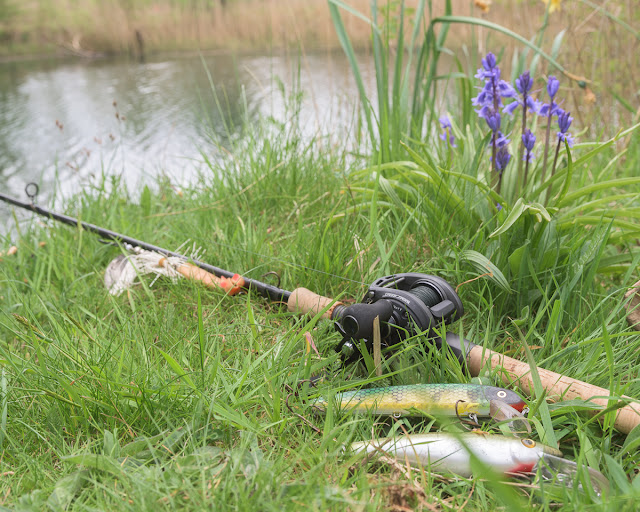 To be honest this was more a try out for the reel than a serious fishing session. I still found myself thinking about where to cast and how to work the lures though. That rhythm of cast, retrieve, cast, retrieve was soon fallen into with each cast following automatically after a retrieve was completed. Time flew by as I worked my way round the pit.

Playing with the reel at home gave me three concerns. There was obviously the thumbar, then there was the high 7.1:1 gear ratio and finally the fact that the levelwind disengages during the cast. on other reels I've found that a disengaging levelwind can bunch the line up. Not a major issue but a possible cause of overruns and other line lay problems.

In practice none of these concerns proved justified. Thumbars on Ambassadeurs are an afterthought and so not in the optimal position. On a reel designed from scratch to have a thumbar it can be positioned where it doesn't get in the way during the retrieve. The high ratio and disengaging levelwind appear to work together to prevent bunching as the levelwind 'catches up' with the line position very quickly.

It only took a couple of casts to stop trying to push a spool release button and use the thumbar automatically. The reel felt nice in the hand, although a little small, and the gear ratio worked fine when twitching lures and cranking small bladed spinnerbaits. It was less happy when I put on a lure with a bigger blade which offered more resistance.

What I did like was the handle. The hard EVA, round, grips were really comfy and the longer throw probably made the gear ratio 'feel' lower than it is.

One thing I noticed was how quickly the line level dropped, being loaded with just 65lb Power Pro an easy cast saw it drop considerably. Another reason for the fast retrieve speed I guess.

I couldn't fault the reel in any practical way, although despite two hours flogging the water I didn't get the chance to test it properly with a pike, and would be happy enough to use this reel or one like it.

There is one thing about it which would worry me in the long run though. The sides of the reel have the dreaded 'soft touch' finish. Unless this is some magic new formula it will turn into a 'sticky touch' finish sooner or later!

As my short session came to an end I swapped the Lew's for one of my ancient C3s to fish the last couple of spots. After one cast trying to use the non-existent thumbar I was straight back in the swing. OK, so the reel needed some oil and was making a bit of a racket but it cast like a dream, felt just right in my hand and more like using a tool to do a job than playing with a pice of fine engineering. Agricultural Ambassadeurs might be, they still 'just work'. It was like coming home!

So I can hand the low profile reel back and save myself a couple of hundred quid by not buying a similar but bigger reel for myself. Maybe if there was a 6501 size low profile reel with no thumbar I might be tempted, but for now I'm sticking with the round reels. I will be looking out for a handle with hard EVA grips though!

In other news blank supplies are picking up. I'm getting on with some long outstanding builds at present. I've also done a bit of an odd build on a blank I had in stock for unknown reasons. I was surprised to be asked if I could build a 2.5lb test curve Torrix float rod. Very much a one-off the result is below. It took a bit of thinking and juggling of fittings but the customer was happy with the build.

It's jobs like this which relieve the boredom of building dozens of identical rods. Not something that happens a lot for me but the way blanks have been arriving in large batches recently it has been pretty monotonous. Last week it was X-1s, next week it's going to be Baitblasters.