Just a couple of afternoon sessions squeezed in since my last post. The first was after pike, where I immediately put the mockers on any chance of success by trying out the new rod and using my non-piking reels. The baitrunners on my 6000OCs can be set really slack, a little too slack at their lightest. The same feature on my medium baitrunners isn't as sensitive. I still thought I'd try them for fishing off the 'runner. Whether that account for me having a dropped take I can't say for sure because when I switched to using a drop-off on the same rod I got another dropped take. I never get dropped takes!

The sunset was nice and autumnal, pinkfoots flying west and a barn owl hunting over the scrubby horse field added to the seasonal feel. 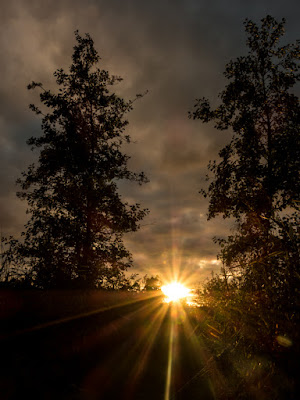 The second session was another attempt to make a date with Nicola. I refuse to call a sturgeon anything else! This time I remembered to put her favourite food in the bag. Not that it did me any good. Although warm it was another afternoon redolent of autumn. A robin sang from the leafless pollarded willows behind me, occasionally to the accompaniment of a pair of chittering blue tits. Once more pinkfoots flew west, and the first flock of fieldfares flew past high and heading towards a wood. 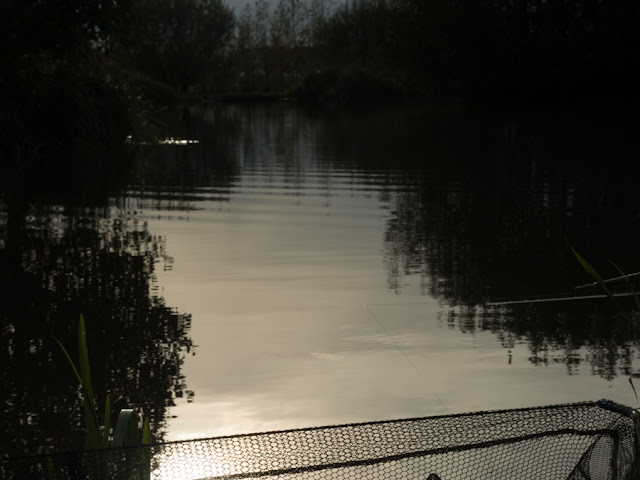 I thought I'd try a different bait on the second rod. A bunch of dendrobenas on a maggot clip, to overcome the silly barbless hoook rule, seemed to be worth a try. Alas all it did was attract the attentions of small fish which pulled at the worms until they were all gone. I swapped to a wafter on that rod. As last time it produced a positive take from a daft carp. I hadn't even put out any free offerings! another small double it bent the stalking rod round well, but not for long. And that was my lot. 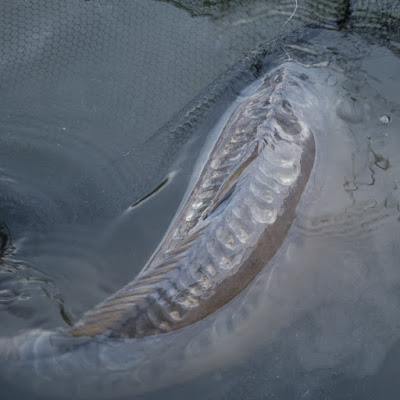 I'm not sure I can take much more of the hunt for Nicola. One target fish in a small pond stuffed with carp is going to prove frustrating I think. It''s like buying an expensive lottery ticket every time I fish! The carp don't run very big, and carp always leave me feeling let down when I land them. They just don't do anything for me. Still, it's a challenge of sorts.

I've never recognised the 'traditional' pike season. Probably because it has never applied in these parts. Even less have I felt the need to restrict my use of natural baits to the colder months. That said, the water I've been doing most of my piking on these last few years has never seemed to respond well until November. And even then the pike have sometimes been a bit lean and manky looking. No longer being an out and out pike angler I've found some other species to occupy me until I've thought the pike would be back in good nick. But this week I couldn't think of anything to fish for. I still have my eel head on really, but I didn't fancy my chances of catching many. So, as worked had pissed me right off I thought I'd set some rods up to mess about with.

I want to try my 3lb Torrixes for piking. Not that I think they'll be any better than my P-5s, I just want play around with them. I also want to try some mono out on a fish bigger than an eel for using next year if I venture to any catfish waters where braid is prohibited. So far the line seems OK, but a prolonged period of use pike should test it to my satisfaction - or otherwise. I ended up with one P-5 rod still rigged with braid, one Torrix rigged to leger a pike bait, and the other Torrix still rigged for eeling. Well, it's still quite warm and an eel bait might get snaffled at dusk. 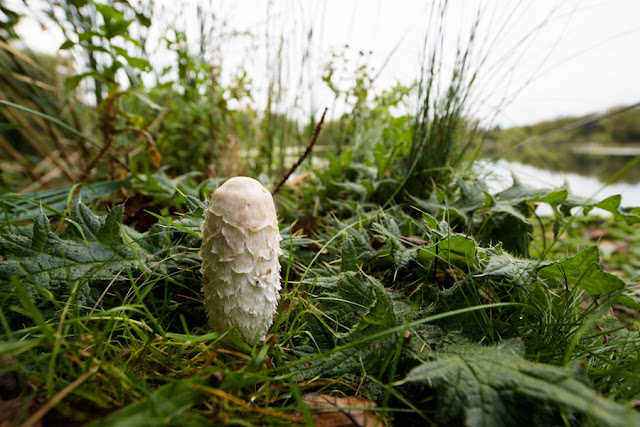 When I arrived at the pit it was that warm after a damp and chilly morning that I almost wished I'd brought three rods rigged for eels. After a wander around failing to find inspiration I got the tackle from the car and didn't walk too far. Before I had a bait in the water the drizzle returned. By the time I got to the car to collect my brolly the drizzle had stopped. I took the brolly back to my swim nonetheless.

There was hardly a breath of wind for a change and the bunny suit hardly necessary. In fact I was almost working up a sweat by the time I had three baits scattered around the swim. I'd only taken a pike pack out of the freezer and some eel baits. The eel rod was cast to a spot I'd had eel action from over the last few weeks, a headless joey mackerel was whacked out a reasonable distance on a leger and a large herring tail plopped in the margin on a float leger.

I sat down and got the stuff out to make up some spare traces, only to be thwarted by having only enough wire to make one. That first session is always a good one for finding out what needs replenishing in the tackle box. A mental note was made. And the empty spool put somewhere I couldn't fail to notice it as a further reminded.

The law of sod being what it is my hopes of testing out the mono and the Torrixes came to nought when after a mere thirty minutes the float dipped and set off to my right, the braid running over the Delkim causing it to make a slow warbling noise from the sounder box. 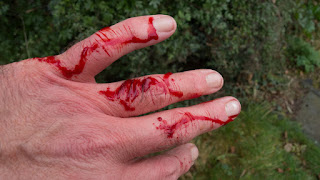 Two turns of the reel handle and the P-5 was buckled right over. The fight was short but spirited, including a gill flaring leap right at the net before the pike was slid into its mesh where I left it as I spread out the mat and zeroed the scales with the sling. The pike was in good condition. Not fat, but chunky looking. Well capable of putting on two or three pounds more before spring.

Although the hooks came free without a problem, a short thrash saw my knuckles grazed. It continues to amaze me how much blood flows from what are really quite superficial wounds when that happens. The pike swam off as if it couldn't give a toss about my bloodied hand! 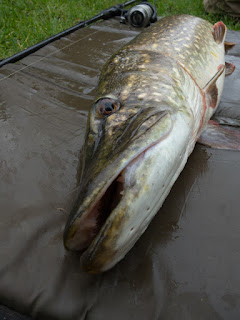 The usual chaos hadn't been created by the landing of a fish and I was soon delving in the pike pack to chop the herring I'd seen in it in two. Except when I got the thing out it wasn't a small herring but a big sardine. My least favourite deadbait. At least it was big enough to chop in half and the head section was impaled and dropped in the margin.

I hadn't really expected to catch anything so the lack of any further runs didn't surprise or disappoint me. It had crossed my mind to pack up after returning the pike but I hung on in case any eels were feeding. They weren't.

Now I'm even more undecided than usual as to what to fish for. It was mild enough to feel reasonably confident having another try for an eel or two. Then again the pike are clearly feeding - a float angler had hooked one that grabbed one of his roach in another swim. I could have an early session after roach. Or I could drag myself to the river before the leaves make it painful to fish. It was so much easier when I only fished for pike!