That's the last of the black reel seats gone. I've now built a few rods with the 'all new' look to both reel seats and rings and I have to say it's a pretty good look. The liners on the new rings are slightly slimmer than of old. Just enough for a rod nerd like me to notice!

As well as building what few rods I can to get thin down my backlog of orders I've had some rebuild jobs for people I know. A set of four Free Spirit carp rods gave me the chance to see what Vortex rings look like on rods. Not as bad as I thought they might. The frames aren't as nicely finished as Fujis but they're on a par with most other brands, including the ones they replaced. The reason for the replacement was the rods' owner being fed up of centres popping out or cracking. That won't happen with the Vortex rings as (with the exception of the tip rings) they don't have ceramic liners but swaged  black steel liners. A pity they only go as small as a size 10 or they'd go well on light specimen rods. 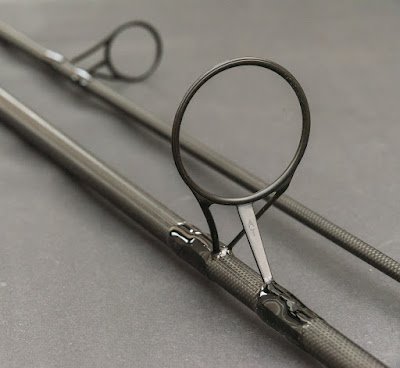 The other rebuilds have been a bit oddball! First off was making two push in butt grips for a fly rod. One short the other long to allow double handled casting. I forgot to take a photo of the short handle but it looks just like the long handle but with a shorter cork section! I fitted the Duplon at the front of the push-in handle to take up wear over time. Should the carbon wear with repeated use the Duplon will compress if the handle has to be shoved in further and further.

As my customer friend was happy with this job he asked me to do something similar to a couple of other rods, but this time with permanent long back grips. That made life easier, although finding cork to use for the fighting grip on one of the rods was a bit of a hassle. That rod originally had a full length 'float rod' cork handle which luckily came off cleanly leaving the exposed section of blank looking pretty untouched. This is a real one-off rod built this way, with a lot of small rings, for a specific non-flyfishing use.

The other rod is an old Daiwa Whisker fly rod which had no butt grip and revealed a strange build method under the reel seat when I removed it. Only about half the reel seat actually covered the blank. The rest hung off the end with no blank inside it! To maintain the rod's overall length I glued in a short extension before fitting the new handle.

Jobs like these are what stop me going nuts from building the same rods over and over. They provide a bit of mental stimulation trying to work out how best to approach them. Unfortunately the idea of going fishing still isn't getting my grey cells fired up, even though the weather has picked up. Mind you, this warmer weather will probably have got the pike thinking about spawning, and it's not warm enough yet to make me think about eels. Hey ho. Until the mojo returns this might become a very sporadic rod building blog!