Birds and a dog

After an early tea I set off to a country park because the rain had eased up and the sun was looking like it might appear for the first time yesterday. When I got there the rain had beaten me to it. Not wet enough to put me off I sheltered the camera under my jacket to keep the drizzle off it.

The first top spot of the day was another Lost Ball! A lucky one because it had been washed downstream by the time I returned. The rainfall hadn't been much, but these upland streams don't need much to pick up pace and colour. 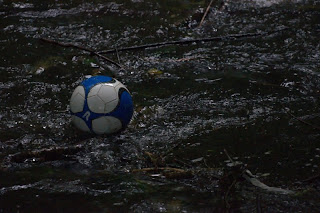 Lost ball 19
The dampness was keeping the smaller birds under cover, which was fine as my big lens is at the lens hospital, the waterfowl were mostly laying on the bank with their heads tucked under their wings. That made them easy to approach and photograph, particularly the bedraggled cygnets. 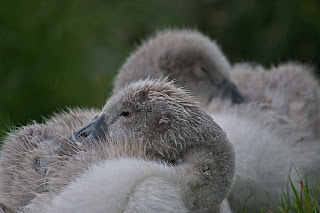 Ugly ducklings
I haven't visited the park for a lot of years, and it's more manicured than I remembered it, but still wild in places. Parts of it reveal it's industrial heritage, although nature is reclaiming it in the less visited areas. Of course dog walkers abound. Which can be fun when the dog is a lively five month old bearded collie! 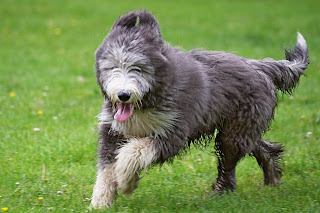 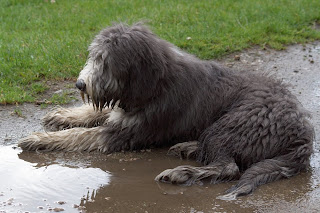 George
The rain had stopped by the time I'd completed my circuit so I headed for the hills of the Land that Time Forgot. Of course it's micro-climate was in operation and the world was misty and wet there. After climbing up the side of a stream that had been almost dry a week ago I descended and tried some arty shots of water droplets on bracken fronds. Nice idea. Poor execution. 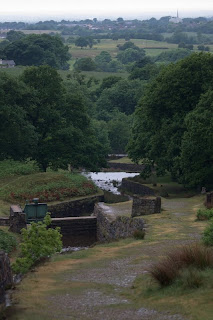 Looking down the formerly-industrialised upland stream 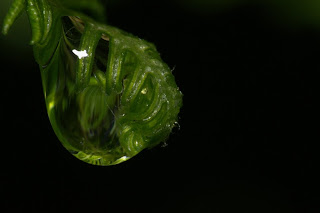 Droplet
Posted by Dave Lumb at 8:46 am