Mucho worko catching up with my backlog meant I needed a little R&R this afternoon. So I popped back to the dragonfly pond. And aptly named it is on a warm sunny afternoon in June. There were dragonflies and damsels flitting about all over the pond and in the vegetation around it. This made it difficult to photograph them as they were constantly on the move. One four spotted chaser did behave and took to posing for long periods allowing me to get close too. Even so it's a whole new skill-set I'm needing to acquire to get nice sharp photos with the flash and ambient light well balanced for a natural look. I'm in deperate need of a flash diffuser too - I have one on order. 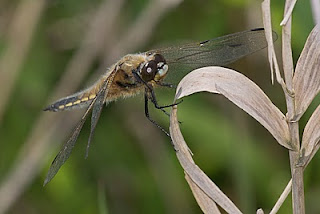 Working from a RAW file meant I could balance out the exposure on the shot above, but the shot below was beyond redemption. 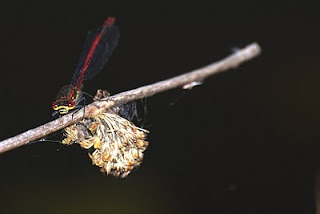 While I was at the pond I had an interesting chat with one of the park rangers. Apparently they had tried electro-fishing the pond to remove all the nasty fish that have the temerity to eat the dragonfly larvae. He seemed to be of the opinion that fish were of little use - so I said they were quite useful in a pond for fishing in. I'm not sure he was too impressed. Although he was pleasant and informed, I got the impression he may have been a bit of a conservation zealot.

With rush hour approaching I thought I'd go looking for dragonflies and damsels at the warbler pit, after looking in on some nearby woodland. There were young tits noisily following their parents through the trees, and chiffchaffs singing their repetitive song. A couple of butterflies were also seen - a red admiral and a speckled wood.

At the warbler pit I was saddened to see a dead female mallard floating in the marginal weed, out of reach from the bank. An equally appalled carp angler appeared, and proceeded to tell me that there had been two 'anglers' in the swim last night shooting anything that moved. He reckoned they had shot and cooked another duck and there were dead starlings found this morning when they had left. The place is uncontrolled for the fishing, and while there are some who respect the palce and take their, and other's,  litter home there is a faction who treat it like a tip. It's a great shame because the place abounds with wildlife.

Leaving the car parking area I wandered off through the meadow. I'm useless on flower identification, although I did note orchids of some sort among the varied blooms. Into the reeds and my ears were immediately assailed by the songs (if you can call them that) of sedge and reed warblers. The birds were soon spotted. They were gathering food for their better hidden young, as were a few reed buntings. I spent quite a while watching the birds, including a chiffchaff, among the reeds and surrounding willow scrub. Back in the car I saw, too late to get a chance for a photo, a kestrel hovering unusually low over the landward edge of a small heavily reeded pool.

It's a surprisingly wild place, but the easy access means that it's frequented by what one tries not to refer to as 'lowlife scum'. But when you have read that two men set a lurcher on a pregnant roe in the area it's hard not to make such rabid generalisations. There seems to me to be a need to make something more of the largely untended land. But then there'd be a danger of it becoming rather too well groomed, like the park the dragonfly pond is in.