Heading for the hills

After a dull and dismal start to the day it turned sunny and warm as promised. Another milk run was in the offing, a little further afield towards hill country. The first port of call was a disused quarry in search of warblers. Blackcaps in particular. I settled into a sunny corner and listened. Unfortunately there was some tree felling going on and the air was rent by the sound of chainsaws. I could hear a chiffchaff's annoying tweets, then a willow warbler close by. I managed to call it in close, briefly, and got one horribly fuzzy pic. 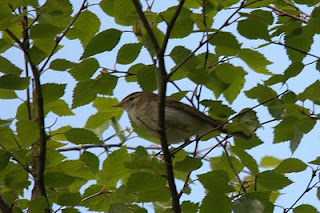 Then I got distracted by a flash of black and white beyond a small silver birch. Something had landed at the edge of the small pool I was sitting above. I was treated to a close, but obscured, view of a jay bathing and shaking itself dry. 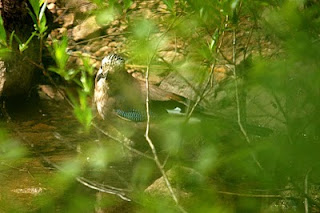 There was still plenty of birdsong, but the racket of the saws was too much for me. I left for the moors. The route I took was pretty barren - the maintained path keeping too far away from where anything might live - with no photo ops to speak of. I was hoping to track down a redstart but failed miserably. There will be more there than I saw in my fleeting walk up the beck and back so worth another visit at some stage.

By now I was roasting and the final leg of my milk run, looking for dipper and grey wagtail habitat was abandoned. On the way home I cooled off and carried on to the marsh. Here there were larks aplenty, one of which obliged by perching on a fence post. 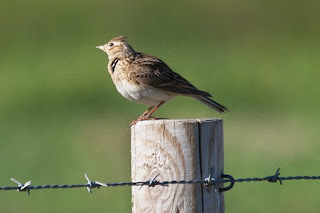 All this bird chasing is getting too much. I really must go catch myself some fish.