Those tench last week made me eager to get back for another session. In the two previous season on the water once they have moved into this area they have hung around and a repeat performance has been on the cards. My hopes were high.

The hot spell continued and conditions were similar to last week, with the exception of the wind direction. Whether that was the deciding factor I'm not sure (I should look back at my records and see if good catches in this area have coincided with a particular wind direction) but the first day followed the same pattern as last week - no tench seen and no bites had. Carp looked to be spawning by the distant reed beds, big bow waves and tail thrashing was watched through binoculars and poorly videoed with my camera.

If anything the water level was down somewhat, there were emergent weedbeds in various places, and the previously clear gravel where I had caught from had some pondweed beginning to sprout. Nature's constant cycle may vary in its timing, but it carries on turning.

Undeterred by the lack of tench activity I baited up in readiness for a second dawn. After all, the previous session had started slowly. It was promised to be an overcast day, perfect for tench, but didn't turn out that way. On either count. By noon I had had enough. The feeling I had was one of wasting my time. The barrow was loaded, pushed back to the car and I headed for another pit for a recce. 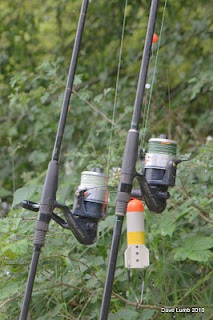 Spod and marker rods at the ready
This remote pit was deserted, the banks more overgrown than last year, and the crystal clear water had rafts of floating weed and algae drifting on the strong breeze. I thought I might as well sit in the sun behind the rods as sit in the car baking on the motorway. The barrow was loaded again and I set up on the bank off which the wind was blowing so any drifting weed would drift away from my lines.

After finding a clear spot with the marker rod I spodded out the last of my seed mix, marked my lines and cast out the baits. Hardly had I eaten my late lunch than the wind swung round 90 degrees to my left and the weed rafts appeared like a scummy green Armada. I endured a frustrating afternoon in the hope that the wind would drop as evening came on and I could fish in peace with the chance of a bream or two.

It was not to be. The wind changed after my evening bacon butties alright. It swung round a few more degrees and blew the weed straight at me. When Roland appeared a couple of hours before dark I started thinking of home. The heat had been draining and a comfy bed was just too appealing. England had the Aussies well under the thumb so I wasn't going to miss out on an exciting finish. By half past nine I retreated - just as a couple of fish topped over my bait.

The trip hadn't been a complete disaster. I got some nice damselfly photos from the grass behind my swim on the second pit and saw plenty of birdlife, some at the really close range that anglers often enjoy. At the second pit, which I knew was rife with butterflies (four species seen during this session), there were a few dragonflies seen along with a multitude of damsels and other photogenic insects, so much so that I might take a run back with just the camera gear to see if I can digitise any. Well, there might just be a couple of rods stashed in the car too... 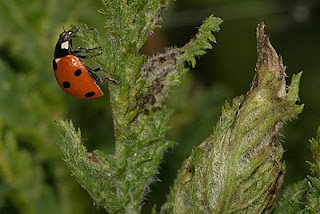 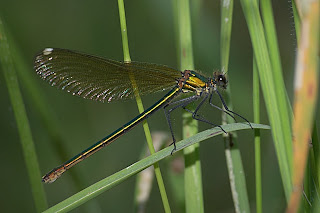 Female banded demoiselle
Posted by Dave Lumb at 11:02 am