A pike for Christmas

No, this isn't one of those corny seasonal ghost stories. I went pike fishing today! Most of the day was spent in the company of this friendly, but reticent, robin which I kept supplying with a regular sprinkiling of maggots. 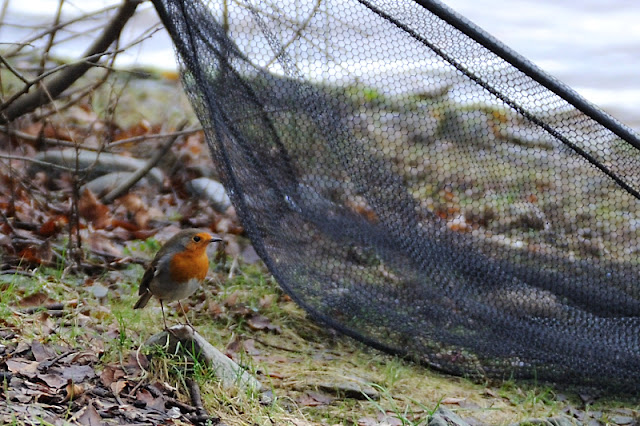 Unsurprisingly the roads were all but deserted on my journey to The Land That Time Forgot. So quiet was the usually busy ring road that three early bird blackbirds were squabbling on the tarmac. As I had the lake to myself on arrival, and expected it to stay that way all day, I took my time getting set up. It was light by the time I had all three baits in the water, staggered at different distances from the bank. Then I sat down to pour the first cup of flask tea of Christmas Day. At which point my companion for the day landed on the middle rod butt before coming begging.

I was expecting strong winds so had picked sheltered spot giving good access to the drop into deeper water. At first the wind was light, and with the air temperature just in double figures it again felt more like spring than mid winter. A small fish topped a few yards out as if to reinforce the illusion. I was confident of some pike action during the morning.

The cloud cover kept the light levels low as the wind picked up later in the morning and the clouds began to break up. It got brighter, but not bright. Around eleven something moving across the sky caught my eye and I was that taken aback it had almost disappeared from view before I grabbed my camera and took a few hasty snaps to prove I had seen what I had seen. A flying fish! Well, an inflatable fish flying through the air.

I'd taken my tip rod with me and although I had a livebait clonking around close in nothing had happened on the pike front. At one I decided to wind the popped-up sardine in and do some serious bait snatching, as much for something to do as to catch another bait or two. Just as the sardine hit the shallows there was a big swirl and a thump on the rod tip. I wasn't sure if the pike had grabbed the bait or not so hastily I opened the bale arm. Line peeled off the spool. I made sure the fish was moving away from me and wound down. A lively but brief scrap ensued and a well fed seven pounder was soon lying in the net.

With the pike returned I was in two minds whether to bother with the tip rod or not. I did. It took a few casts before I had a bite, resulting in a hand sized skimmer. Unusually that was it. I gave it until half past two before jacking in the feeder fishing, throwing a handful of maggots for the robin, and putting another sardine out.

The last hour and three quarters of the session were as uneventful as most of the day had been. As the sun began to set the clouds decided to break up more than they had all day and the moors behind me lit up with a warm glow. Maybe it was the clearing sky giving an illusion that sunset came later than it has been doing of late. Or maybe it really did now the shortest day is behind us for another year. Whatever the case it lifted my spirits as I drove home into the last of the sun's afterglow anticipating the coming of spring.