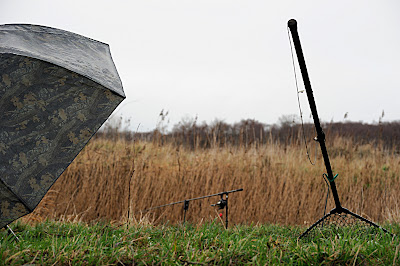 Other countries have climates, we get weather. This is markedly so on the west coast where the rain falls first as weather systems move in from the Atlantic. It was no real surprise to find rain lashing against the window when I awoke this morning. I'm no fan of fishing in the rain but I was up for it today. Even so I was tempted to turn the car round and head back home when I arrived at the drain. It was particularly wet and windy.

As yesterday I stayed near the car, wandering around in the darkness to find somewhere to cast out. At first there was no flow at all, but by the time it was light enough to see what was going on the pumps had been switched on. The bait that had been cast across was brought close in. Unusually the wind died away after sunrise, and the rain eased. It was still as mild as yesterday too, so although drencehd I wasn't shivering.

Working on an idea from yesterday's investigation I was quite hopeful of some action. When it came it was still a surprise though. The float over the lamprey shot out from the near margin, but stopped before I could get to the rod. A dropped run? I don't get them. Not a dropped run, but a pinched bait. Somehow the pike had nabbed the lamprey head from the trebles.

I rebaited, recast, and sat it out until a break in the rain, with some accompanying sunshine, decided me to make a move upstream. Within half an hour I had three baits spread around the new swim. Just in time to get the brolly up to take shelter from more rain.

This session was a bit of an experimental one. I've been meaning to give an idea a try out for some time now, and this was my first chance to put it into practice. The first run had come to a bait using it, and when the float on the mackerel rod zipped downstream my idea certainly wasn't acting as a deterrent. This pike didn't pinch my bait and when it felt steel it went airborne. Unfortunately it managed to leap over the line on my downstream rod resulting in a bit of a tangle. Luckily the fish also gave up the fight at this point or the tangle might have been much worse. It still necessitated the cutting of the line the pike was attached to so I could sort everything out with the minimum of fuss.

I left the pike resting in the net while I recast the downstream rod. Then I hoisted the fish ashore and unhooked it, whereupon I noticed it was missing a pectoral fin. That's the second one this season off the drain. Definitely two different fish as this one had a stump and was a slightly larger fish. It was now lunchtime, so I ate my meagre lunch of honey barms after retackling and putting on a fresh half joey mackerel. 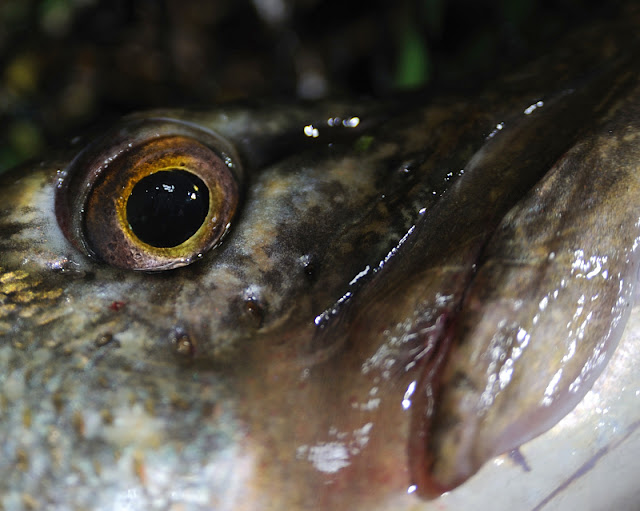 The rain eased up again in early afternoon, but the sun didn't shine and a chilly wind sprang up. Around two o'clock the pumping slowed almost to a standstill. Some fry scattered well upstream. A flock of ten or a dozen magpies raucously flew across the drain into a bare willow. Then it began to rain again. By now it was feeling more wintry. I thought this was down to a combination of my waterproofs being wet and the wind-chill factor. When I got back to the car just as a hail squall hit, after packing up when the rain had stopped around three, I discovered that the temperature had dropped from 10 when I had arrived to 6 as I departed.

By the time I was under way the hail had headed east and bright sunshine was streaming through the clouds. I half wished I'd stuck it out until dark. Only half wished though. Gone are the days of fishing from dawn to dusk because that's what the books tell you pikers do. I fish from when I fell like starting until I feel like packing up, because that's what this piker does. Sure I might miss a fish or two. I'll not miss suffering for my 'art' though!
Posted by Dave Lumb at 6:29 pm