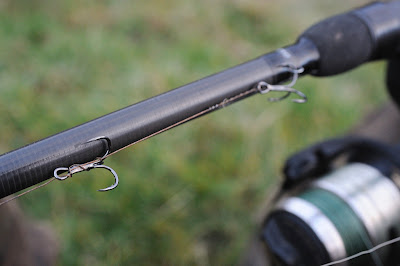 Not only did I have some free time and the inclination to rise before daybreak, but the forecast was for a dry and warm day. I also had something in mind to give a try. All this fell nicely into place and I was unloading the gear with plenty of time to make the tramp to my intended swim.

With my rucksack on my back I took a look at the water and saw it running off faster than I'd anticipated. My cunning plan might involve a long walk, a few wasted minutes watching baits being dragged out of position, and  a long walk back to the car. As I was only planning on fishing the morning, having no scran with me, I took the executive decision to put the gear back in the car and head for somewhere involving less of a walk. That way, should it prove to be hard work presenting baits, I'd not use up energy unnecessarily. It's not that I'm lazy, just that I don't like putting in effort for no reward. 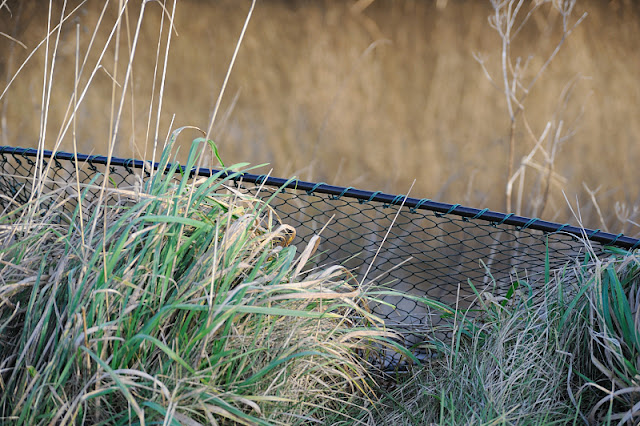 My decision proved to be the right one. First out was the paternoster fishing slightly downstream 'barbel style' with the rod propped up on one rod rest and the baitrunner engaged. The second rod was baited with a headless joey mackerel and cast into the far bank reeds. On pulling the rig free the bait dropped in the water. Bah.

The trace had kinked, too, so I got the third rod out and baited it with a lamprey head which got where I wanted after a few attempts. In no time at all it was dragging across the drain towards my paternoster float. A quick recast saw it dropping in upstream, a yard or so from the near bank. I settled in to my chair to have a brew and make up a replacement trace. With that done I thought it better to stick to two rods. Three baits in a line along one margin seemed like overkill. 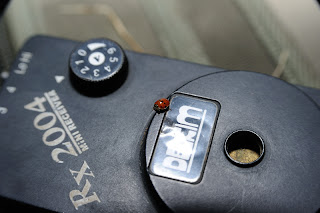 On my way to the drain fieldfares had flown up from a field at the side of the track. Very early birds as it was still dark at the time. Despite these winter migrants being around it felt much more like spring. A tiny ladybird must have thought the same as it took to wandering around my Delkim sounder box. Albeit rather slowly.

After less than an hour I thought I was barbel fishing as the baitrunner on the paternoster rod spun into life in dramatic fashion. No doubting that take. Alas my strike met with scant resistance. As in none at all. Both the bait and the bait flag were gone. Disconsolately I delved into the bait bag to ponder what to put on the hooks.

Before I could make up my mind the float on the lamprey rod shot downstream sinking out of sight as it went. Going by the speed of the take I'm sure this was the same pike I'd just pulled out of. This time my strike was countered by line peeling from the spool against a slightly too slack drag. With the strong flow and the pressure I was applying I wasn't surprised when the fish kited under the overhanging reeds downstream of me. At this point it gave up the ghost and allowed me to pump it upstream to the waiting net. Not a big fish, but not the usual three pound jack either. 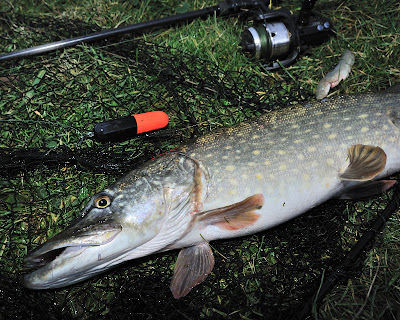 After returning the pike I got both rods back out. Lamprey on one, headless joey mackerel on the other. The day was looking up. I was wishing I'd made the effort to put some pack-up together. After another hour it seemed wise to move upstream a few yards. Once settled in to my new spot the sun came out and the springlike feel to the day increased. It certainly didn't feel anything like the day after the winter solstice.

An hour in this spot and it was time to have another move before packing up and heading to the tackle shop for some deadbaits to see me over the holiday period. By the time I had moved and cast the baits out I was really quite warm. So much so I removed the bunny suit. Although the pumping eased sufficiently for me to present a bait across the drain when I was in my final swim I didn't have the time to make the most of it. I did get a few more ideas for fishing when the drain is pumping hard. So my efforts were not altogether in vain. I packed up rather reluctantly with a rumbling belly. I think I might do it all again tomorrow.