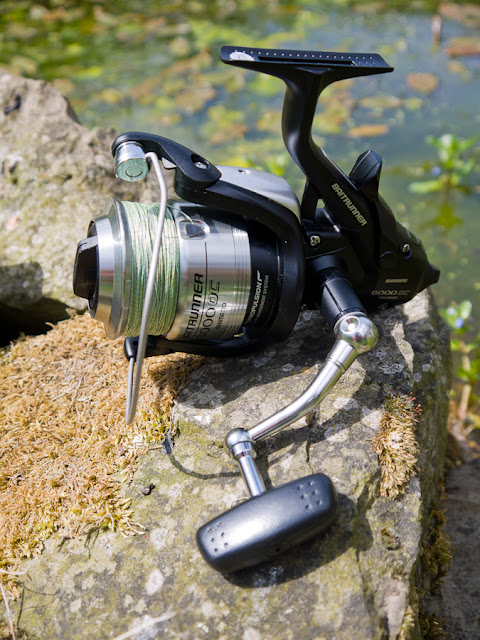 New rods need new reels or they don't feel like new rods! That's why I ordered another pair of Baitrunners the other week. My rationalisation being that the reels I was using didn't have instant anti-reverses, which makes folding rods up rigged with braid more prone to slack line and tangles in transit. As if I needed an excuse!

I had considered trying to track down two more 3500Bs. Good solid reels which are just the right size for close in fishing with 12-15lb mono or 30-50lb braid. On the heavy side, but built to last. Then it crossed my mind that there was the new OC series which looks on paper to be a slightly less featured version of the D series. Lacking the waterproof drag and not much else. Not quite so 'blingy' either with a silver rather than gold spool. Knowing the 4000 size would be too small and unable to get my hands on one of the next size up I took a chance that my guess would be right. The reels turned up at my local tackle shop and I'd got it spot on.

As soon as I held one of the reels and turned its handle it felt reassuringly solid. Compared to the flimsy bale arm on the 4000D the 6000OC has a less refined but stronger looking one. The roller is chunky and seems to do its job.

Loaded with braid a 6000OC weighs the same as a similarly loaded 3500B and is pretty much the same overall size. The spools are the same diameter at the back, the lip on the OC slightly wider, but the OC spool is a touch longer (front to back). The line lay isn't great, slightly improved on the 3500B, but not much. Not that it matters at close range and matters even less with braid than mono in my experience.

The only negative comment I have to make before fishing with the reels is that the Baitrunner doesn't go as slack as some others. Not a problem on a big river barbel reel, but if fishing off the 'runner for predators it might be. I guess I'll have to go eel fishing to find out.