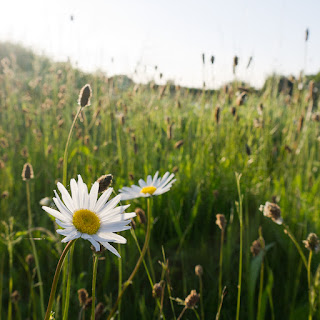 Despite my 'holiday' I managed to find some work to occupy me in the morning. The ODI cricket kept me interested until their wickets tumbled while I was making an early evening meal. I was at the waterside earlier than intended, looking for some gullible roach to turn into eel baits. Fish always do a vanishing act when you think you know where they'll be. Just as well I'd found one more bag of rudd in the freezer.

It was another hot, sunny afternoon with just a light breeze wafting the daisies and grasses. I spent some time just wandering around looking at the water and the world, there being no rush to get the eel baits out. At long last damselflies are emerging and numerous blue and blue tailed damsels were on the wing or paired up. I even spotted an emerald damsel, a first for me in this spot. Again my lack of botanical knowledge let me down as I noted a variety of flowers amongst the grasses and plantains.

Fish were less in evidence, so I chose my swim on the basis of comfort. It hadn't been fished for some time and the marginal reeds were closing it up a bit. I've been carting a Seymo weed cutter around for years now only using it a couple of times. Out it came to screw onto my landing net pole. Except I couldn't get the spreader block off. Out with a bankstick and remove the Delkim. This did the job. Only one problem. I'd bent the bankstick. Then another problem arose. The Delkim has one of their quick release things attached. Unscrewing this from the stick meant it had to be reattached using an Allen key. Two slight problems with that. I couldn't get the release off the Delk, and even if I could have done I didn't have an Allen key with me - it's in my roach/bream/tench box, which was at home. Thankfully, and unusually, I had a spare Delkim in my bag. 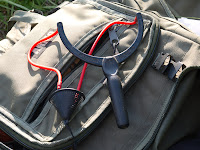 Problems overcome, if not solved, I was soon set up and it was time to put the new catapult pouch to use. As predicted it was useless - or my technique is. The first couple of attempts saw as many maggots bouncing back at me as entering the water, and those that did go the right way scattered far and wide. I threw some in by hand...

I'd forgotten all about the cricket. When I got round to switching the radio on it was, as I expected, all over. Roll on the Ashes! With the hot weather I'd not bothered with a flask and cracked open a bottle of pop while I sat back to watch the mayflies dance over the reeds, fend off the blundering crane flies and pick maggots out of my rucksack. 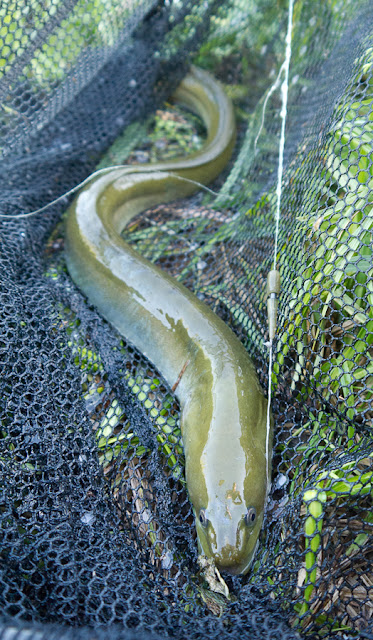 It was a complete surprise when, at half past seven in bright sunshine, the right hand bobbin dropped off. Looking at the line I saw a reed stem was brushing it near the rod tip. I guessed that had blown around and dislodged the line from the lightly set clip. I picked the rod up and flicked the line free. The line was moving out. A quick strike and I felt the unmistakable twisting and turning of an eel - one of my new reels was christened. Maybe not the leviathan I was hoping for, it was still nice to see it writhing up in the clear water.

After returning the eel I noticed the hooklink was frayed. Up until now I'd had no problems with the ProLeader. I've used it for pike in the past with only an occasional minor fraying of the steel outer and no trouble at all with eels last year. I had heard of other people having a lot of trouble with the stuff with both predatory species. Once bitten (or frayed in this case) twice shy. I'll be using 'proper' wire from now on.

The rudd tail was replaced with the same fish's head and cast out. I swapped the worm rig to a Dyson to fish it off bottom. Dropping it in the clear margins I could see it would do its job. As last year worms are proving less successful than deadbaits so far.

For almost three hours the alarms remained silent. Around ten fifteen I had a couple of single bleeps to the deadbait. There was nothing there. Not even the bait. A whole rudd went out. A few minutes later I had another bleep which I ignored. When I packed up that bait had gone too. It wasn't quite bunny-suit-cold, but there was a chill in the air which made me pack up early. I'd learned a bit more and there were things that needed sorting. Bankstick, Delkim, wire. I couldn't settle with those whirring round in my head. I need to be chilled to fish well. 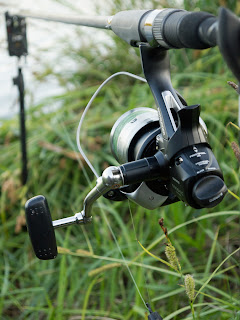 A pound plus eel is no test for a heavy duty reel, but I'm liking the way the 6000OCs  handle. The Baitrunner mechanism can't be set super slack, but I think it goes slack enough to try for eels. I'm also liking the anti-reverse switch, which is larger than on some and almost as easy to flick to the off position as on the original and D series reels. The switch on the XTEAs I had was fiddly and easy to miss, and the one on the smaller reels is also a bit fiddly. Not a problem if you area drag user, but I sometimes use the drag and sometimes backwind - it depends one what I'm fishing for and if I'm using braid or mono. It's just a shame they have so many 'silvery' bits on them. It might be time to get the spray paint and black tape out!

I've not tried any long chucks with the reels but many years ago I did some comparisons and concluded that it's spool diameter and length that affects how far a reel will cast more than the neatness of its line lay system. I'm pretty sure they'll be fine for any distance I want to cast that doesn't require a big pit reel.

I followed my usual packing up ritual of loading the rucksack first, folding up the chair and finally putting the rods in the sling after the banksticks - leaving the rods lying on the ground with the baitrunner on, just in case. It was almost dark by the time everything was packed away so it was a good job I had my headtorch on or I might have stood on the dark lump that had appeared by the rucksack. LED light revealed it to be a foraging hedge pig. Another sign that summer is well under way at long last. 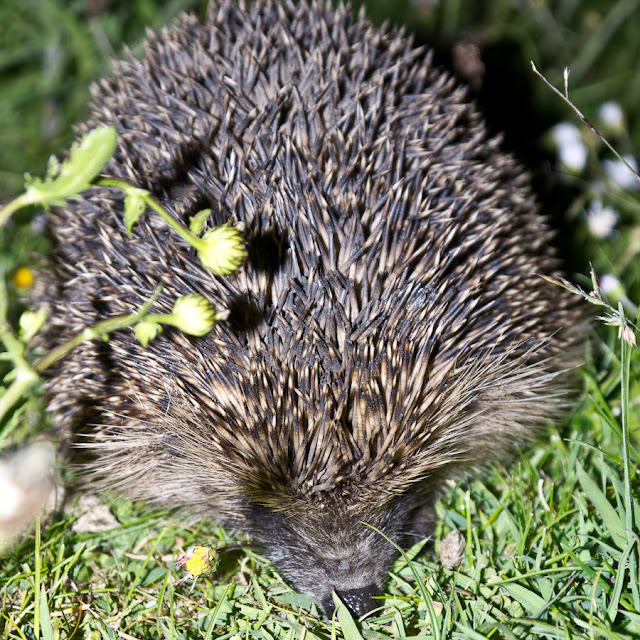