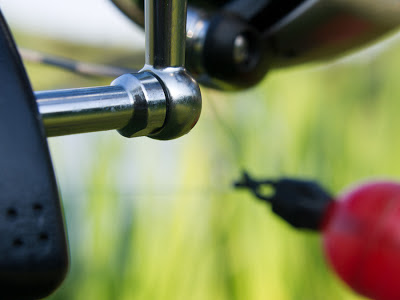 A shining sun coupled with a rainy forecast for the following evening plus a much improved back meant only one thing after two weeks of not fishing. My original idea was to set off after reheating the remains of Tuesday's chilli, but I changed my mind and took the stove and pan with me. Not to mention the kettle and some teabags.

There was a stiff wind blowing from the west. So stiff that while it was t-shirt weather out of it, standing in it's full force it was sweatshirt and fleece weather. I headed for the most sheltered spot I could find. On such a bright afternoon I dithered about casting out the eel baits and nearly left it until I'de started my brew. It seemed daft not to have baits in the water, though, so the rods got set up first.

Last time out I'd had my ProLeader get frayed by an eel's teeth for the first time. The day I fell over and did my back in I'd been to purchase some nylon coated wire to try out. Why nylon coated I'm not sure. I think I had it in mind that I would be able to knot it. As it turned out it could be knotted, but the knots were horribly bulky. I crimped it as best I could, not being able to find my selection of crimps in different sizes. I always find crimps ungainly and hooks and swivels can 'double back' in the loop to get out of line. Probably a confidence thing. 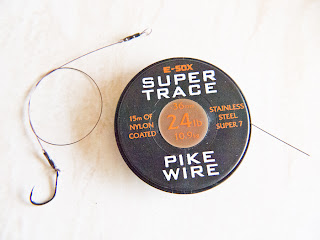 With my belly full and a mug of proper tea (real milk was used!) in my hand I  began to ponder the sense of starting so early. Bright sun and clear water wasn't my idea of eel fishing conditions. Although as a youth my mates and I used to target eels on the canal using worms, preferring hot sunny afternoons for it. Perhaps we get stuck in believing the lore too much. I've caught a number of eels while pike fishing in summer, and had deadbaits shredded by them.

I got up to stretch my legs and keep my back from stiffening up. I'd barely reached the next swim when there were a couple of bleeps from the sounder box. The bobbins were still in place. Must have been the wind blowing the slightly slack line to the drop-off bobbin. I wandered off again. Surveying the swim next door the sounder box let out a continuous trill. The bobbin was off the legered bait rod. Picking the rod up it bent over and I felt the distinctive writhing throb of an eel. It looked a reasonable one judging by the width of its head and shoulders. It was easily unhooked, maybe hooking itself against the bobbin. The weight was a little disappointing, being a shade over a pound. Not yet six o'clock and an eel on the bank. 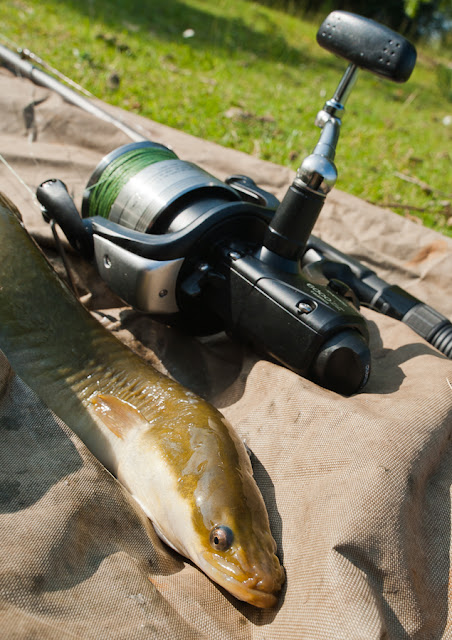 Given the conditions I'd cast the legered rudd further from the bank than usual. Not a long way out but past the shelf and, I hoped, past the weedline. Maybe in the bright light the eels would still be feeding in deeper water. The other rod was fishing a Dyson rig. This I had cast closer in, the idea being to have an off-bottom bait dangling either in or over the weed edge.

One thing was for sure, the wire trace hadn't deterred this particular eel. That gave my confidence a boost.

It was a couple more hours before I was disturbed again when the same bobbin twitched. I pulled the line out of the clip and some more was taken fitfully. The strike met with nothing. A fresh bait was cast out and taken almost immediately. Again my strike was futile. The next bait had settled and I was clipping on the bobbin when the line was pulled from my fingers. The baitrunner was on while I was messing about and the spool began to turn slowly. This time I connected with what felt like a better fish.

The rod was hooped over nicely, not being fully tested but seeming like it'll be up to the job when required, and the reel certainly has plenty of smooth cranking power. In the net, I guessed the weight of the eel at a couple of pounds. It fell a few ounces short. Looking at the shape of the fish I realised that, like the first one, it had a broad head and thick shoulders but tapered away quickly. This was what was accounting for my overestimations. Still, two eels out and there was more than a couple of hours of daylight left. I began to rethink my strategy for the future. 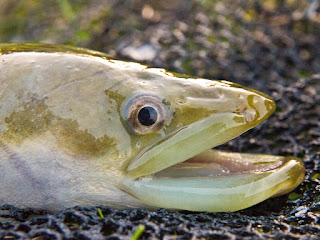 The next take, once more to the legered bait, came three quarters of an hour later. This fish had a similar body shape to the first two and fell between them in weight.

With the general confidence of the takes I was getting I switched to fishing off the baitrunner. An hour later the spool on the legered bait rod spun. I expected such a bold eel to be easily hooked. It wasn't. I did feel the fish briefly, a couple of twists and head shakes, before it was gone. The  recast bait wasn't taken immediately, twenty minutes passed before it was picked up. The frustration of eel fishing was back when I missed the run. Another five minute wait saw me fluff a chance once more. By now I was pretty much out of bait and called it a day.

Some lessons learned, and some questions posed. I can understand why people become obsessed with eel fishing. Not only are eels enigmatic, they are contrary and frustrating creatures. They certainly keep you thinking!