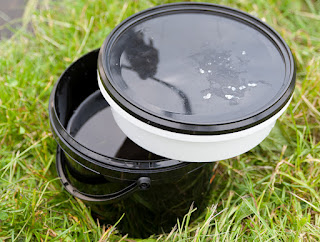 One of these days I'll learn to strike while the iron is hot. On my way to the tackle shop I called in at the canal for a look-see. There were small fish cruising and topping all over in the warm sun. Great. I'd nip back after tea and nab a few for bait, then stick a couple out for the eels.

The tackle shop almost tempted me with a new low chair, but I hadn't got enough cash on me. It might yet tempt me. I picked up a tub of dendrobenas in order that I could eke out my one remaining frozen fish in case I failed to catch anything for bait. I also picked up one of those Sonubaits buckets I mentioned a while back. I still can't understand what's so attractive about a bucket with a tray that clips in the top...

True to form, what had been a bright t-shirt day clouded over. After tea I did the unthinkable and cut the front grass. There were oak saplings sprouting amongst the horsetails. Then it started to spit with rain. I had the rods in the car but dithered over loading everything else. Then the sky began to look brighter and the rain stopped. Off I went.

I was soon dangling a maggot in the canal which was now seemingly devoid of fish. However, the float bobbed and dipped and a small bream, they seem as numerous as roach used to be when I was a lad, was popped in the bait storage facility. That was it. I struggled on until boredom made me set the eel rods up. A quick plumb around revealed little bottom weed so the baits went out. 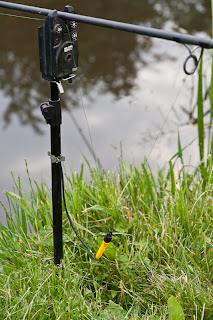 I'd planned ahead and put then overtrousers on before setting off. When the rain arrived at nine thirty I put the brolly up. It was warm summer rain, falling gently. About as pleasant as rain can be. Not enough to warrant putting on the waterproof jacket. Still too warm to require the fleece.

Shortly before ten the bites started. Twitchy affairs that refused to develop. The bobbin would always reach the rod before dropping back again. Rig problems? More weed than I'd thought? Line bites? Bootlaces? I've no idea.

The rain eased, then stopped. I almost took the brolly down.

The bites continued. I hit one to feel a momentary thump and wriggle. Once a bait needed replacing. Then it rained.

I mean rained. Big, heavy drops. Lots of them. I put the jacket on and looked out to see no sign of respite. It was in for the night. Whatever I did, however long I waited, I was going to get wet. I planned my retreat carefully and everything was packed away quickly and efficiently. Water was running off everything. 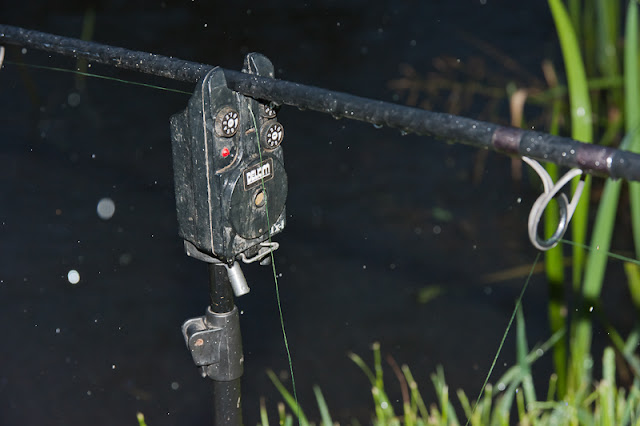 In the car the windows misted up immediately and the wipers struggled to clear the windscreen. Rain filled the gutters and ran down the slightest of slopes in a torrent. When I arrived home, which took less than ten minutes, it had stopped. Pretty much. I was convinced that, with the wind being negligible, I had driven ahead of the cloud and the rain would arrive as I put the gear away. It didn't. The rain really had stopped. I'd got soaked for nothing. The waterproofs were hung in the bathroom to drip dry and I went to bed in a huff.