Still in the dark ages

A kestrel flew over head, prey grasped in its talons, as I loaded myself up for the walk along the canal towards the spot I fished last time out. When I got there I was greeted by the sight below. 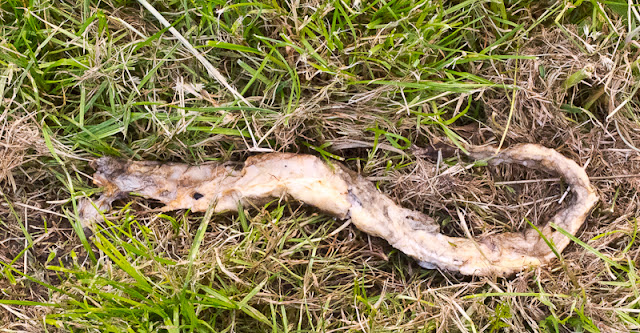 Nobody would ever consider cutting the head off a perch or bream and chucking its body in the grass to rot, yet eels still get this treatment in the 21st century. It's not as if pike get a much better deal. I still see jacks floating in the canal from time to time. Either killed deliberately or dead through bad handling. I decided to fish a different swim.

As usual the first job was to get some baits caught. The first one took all of ten minutes. Then it got harder. Bites weren't lacking, it was just that the next fish was a hybrid that I just managed to swing to hand without the rod snapping. Then the tiny perch arrived. For some reason I don't fancy perch as bait for eels. They seemed to avoid eel attention when I used them as deadbait for pike in the Lake District, while herrings and mackerel would get ragged to bits. Which makes me consider trying mackerel for the eels. For some reason coarse fish are always thought of as eel baits, but sea deads are for pike. I've landed one or two eels on half herrings in my time. I should give it a go. 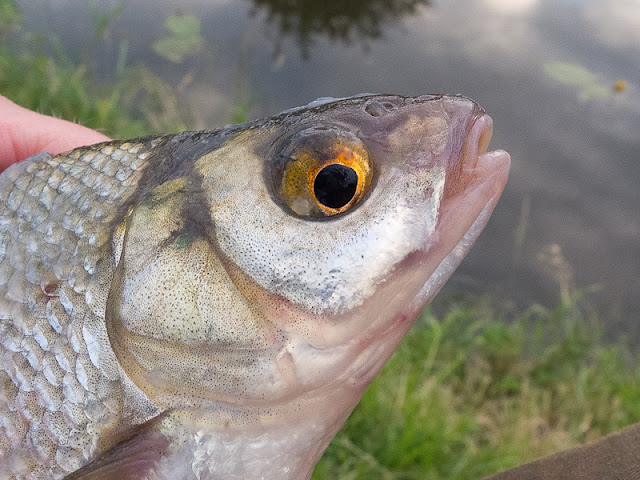 I missed quite a few bites because I was watching the birdlife. I'd heard a whitethroat rasping. They love tangles of bramble and briar, so it was no surprise to see one, maybe two, whitethroats in the patch opposite me and working through the hawthorn bush the thorny mess surrounded. 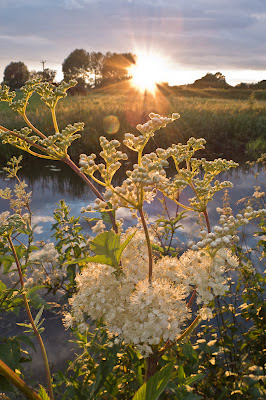 As it got towards eeling hour the bites on the float rod came more regularly and increased in confidence, but the fish were getting bigger. Roach and hybrids, one of which tried to drag the rod in while I was setting up the eel gear.

It wasn't much of a sunset in some ways, but the way it briefly brushed the tops of the grass and lit the delicate flowers of the meadowseet evoked the long, late summer evenings that are the nostalgic view of England at this time of year. In reality the period of glancing golden light is fleeting. We imagine it lasts longer than it does, and photographs turn moments into an age, which in turn becomes our memory of the experience.

Although there was cloud cover and the air temperature was high there was a breeze with enough north in it to bring a chill. There was no rain. Which made a change. I wasn't sure if I'd made the right swim selection though.

The first take came to the left hand  rod. A twitchy affair which I missed. The bait was taken almost immediately on the recast. Again the run was missed. Third time out the bobbin rose and dropped halfway back. When this happens I help it on its way by pulling the slack through the rings to realign the bobbin on its full drop. Except this time the slack was never ending. Either the line had been bitten through (possibly by a passing pike) or the lead was tangled and I had a slack-liner. I removed the bobbin from the line, picked up the rod and wound into a fish. This fish turned out to be a skinny jack not much heavier than the eels I've been catching!

That rod remained undisturbed, but the bites then commenced on the other one. Some twitchy takes that didn't develop, one an absolute screamer that had the baitrunner spinning. All were missed. Although frustrating, and the eels small (which might be part of the problem), I think it's the challenge that is keeping me interested for now. Although the thought of throwing a couple of boilies in a barbel river to get the rods bent without much effort is becoming increasingly attractive.