Bad day at the office

I had some rods that needed varnishing in a hurry. That was the cue for my drying motor to pack up. Only one thing for it. Go old skool and turn the rods by hand. It's labour intensive and thoroughly boring but the finish is just as good as leaving the rods to spin under power.

If you don't have a motorised dryer and want to use two pack epoxy occasionally this is the way to do it. Find a large cardboard box, cut 'V' notches in the tops of two opposing sides, put it somewhere level, and rest the rod sections in the notches. As the varnish runs down turn the rod section through 180°. Repeat until the varnish has cured sufficiently to stop running. Depending on the ambient temperature this can take anything up to six hours. I told you it is a tedious and boring way of doing things! 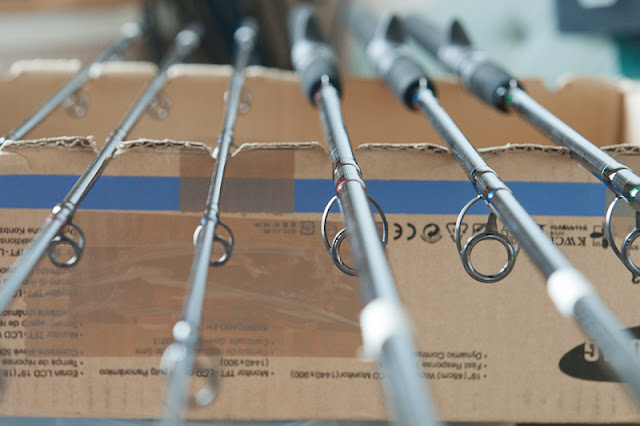 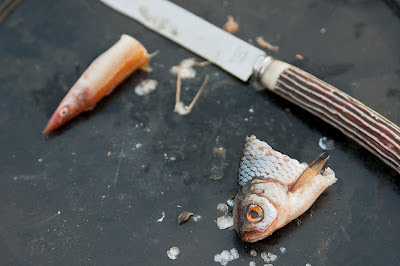 With that job out of the way I set off late for an eel session.

My first choice swim was blocked by floating weed. My second choice was blocked by a moored barge. I set up in a swim I'd fished before. As ever the float rod was in use to start with. As ever it was a struggle to get bites. When I did hook a fish it was too big for bait, and dropped off anyway.

With the day having been bright and warm, and the evening having turned overcast and muggy, I was confident. Especially as there were eelish bubbles coming up in the margins. I put the eel rods out early. A rudd head to the far bank and a sandeel head, as an experiment, in the channel. It was then I realised that in my haste to get ready I had neglected to put anything to drink in the rucksack. When I switched the radio on, to find it dead, I realised I had no spare batteries for it. It could be a long session.

Eventually I landed a couple of hybrids on the float rod. Both were just a bit too big. They might be a nice size for the match and pleasure anglers to fill their keepnets with, but they're no blooming use to me at the moment. Come October and I might see them differently. Then again they might do a disappearing act when the weather cools down.

It was still warm enough to sit without the fleece on when I packed the float rod away, and it stayed warm enough for that until ten. As the light started to fade the reed warblers began their chatter. I've heard them throw snatches of other birds songs and calls into their racket before. Yesterday at least one was mimicking the oystercatchers which habituate the area.

The air was still, the sky overcast, it was the warmest it's been for a while, everything seemed perfect for an eel or two. The bobbins didn't twitch once. Nothing. Was it the baits? Was it the choice of swim? Was it just one of those things? I'll have to try again to see if I can find out.