I gave in to temptation and bought the low chair I'd seen on Thursday. Since my Nash Nomad gave up for good after being repaired I have been using an old Fox chair that Graham Slater 'kindly' gave me. It's a reworking of an old design that was around when I started out on the big fish trail - The Redmire sold by Trevor Moss's (now Neville Fickling's) The Tackle Shop. It's nice and light, which is great. 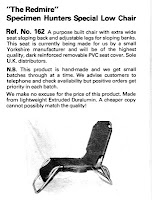 I should have known that Graham wouldn't give something away if it was really good. What I discovered, and Graham later confirmed, was that it's not very comfortable. The seat cover also slides back and the folding legs fall about when you pick it up.

As the photo below shows I took to securing the legs with a rod band for transport. Unlike the Nomad the seat and back covers are not connected, so you can't stuff jackets and fleeces in it to carry them. You can, but they tend to fall out before you get to your swim. The new Adjusta Level chair has addressed these faults. It has been made a couple of pounds heavier in the process, although under my arm the difference feels negligible.

What follows is not a review, more a comparison of old and new. I'll report back at a later date as to how the chair performs in real world situations.

This photo also shows how much flatter the new chair folds up. This makes it easier to carry under one arm, and better for stuffing in the back of the car. The chair comes with a padded carry strap - which I attached for the photo below, then promptly removed and threw back in the garage. There are also adjustable buckle clips to stop the chair opening up when folded. This is handy if you do stuff clothing in it for transportation, which is possible because the cover is now one piece.


The cover is now padded, with a headrest - or, for tall people like me, a neck rest. Time will tell if this makes any difference to comfort. It is also extended at the front, making the seat area much longer which really does make the chair better for sitting in. I always felt like I was perching on the old chair and often put my feet on the cross rail to stop myself slipping off.

The legs have been realigned and altered in the way they fold. In fact the frame has been almost entirely re-jigged while retaining the principle of the design. The overall height at the highest setting isn't much different. However, when set at their lowest the new chair is a touch higher.

I'm not sure if the plastic things on the legs are meant to be non-slip feet, but when you fold both legs up they can be used to stop them falling down. If that is intentional, or why that might matter to you, I don't know. I thought I'd mention it anyway!

Having only sat on the chair for a few hours so far it certainly seemed like an improvement over the previous model. Prolonged use will tell.