Mostly thanks to non-arrival of materials I had time to wet a line on Sunday. I waited until the frost had cleared and my lunch had settled before venturing forth into a bright, sunny and reasonably warm (in the bunny suit) afternoon. The frost must have been a hard one over the two previous nights as there was a covering of ice in one corner. I had a walk around to see if there was ice elsewhere and a swim I don't usually fancy took my eye. I returned to it with the gear and plopped three deadbaits around it. It has to be said that the main attraction of the swim was being in the sun and sheltered from the light, slightly from the east, wind!

The low sun was causing a bit of a problem by not only being directly in my face, but reflecting off the water right where I had cast the bluey head. I couldn't see my float. I could see the line and if that had gone slack I'd have spotted it. A straight run would have sounded the alarm. I wriggled free of the top of my bunny suit and tied the arms around my waist to cool off. Then I sat back and soaked up the sunshine. It wasn't long before a very friendly robin came to see me hoping to be thrown something edible but I had nothing to offer it. 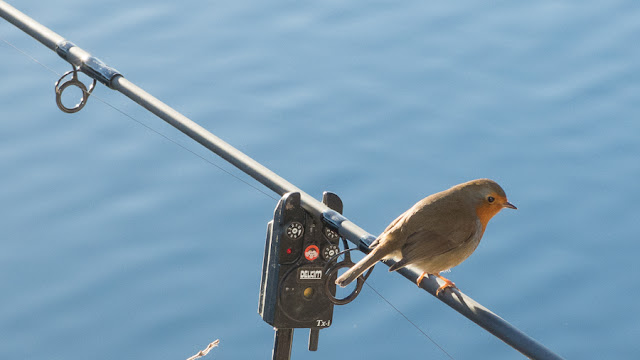 The sun moves quickly across the sky as we get close to the winter solstice and I was soon able to see the furthest float, not moving. An hour of inactivity and my feet were itching. Time for a move. The bunny suit was put back on properly and the gear transferred to a swim I have caught from before. Here the sun was to my left, making all floats easy to see. 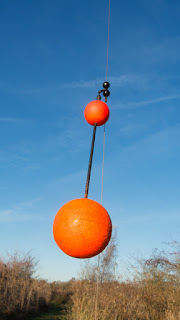 Quite what inspired (?) me to make the Lumbbell Float on the left I really don't know. I don't think it offers much, if any, advantage over a piece of balsa wood! It was easy to make and it performed as hoped. Not in anger, unfortunately. It was highly visible, and when the line was made slack the lower polyball did pop to the surface to show the line was slack. Without that the float wouldn't have appeared any different if a fish moved towards the rod. I doubt I'll persevere with the concept.

Shortly after settling into the swim a fish had moved the reeds to my right in a manner suggestive of a small pike striking at prey. Half an hour later it happened again. This time the nearby float fell over too. Had the pike which had picked up my lamprey head spooked a jack? I don't know but I do know the float began to move off and the pike I connected with stayed deep.

After some head thrashing, when it was apparent there was a free flying treble, I bustled the pike over the net and lifted. It looked like it would require the scales so I pinned the net down with the bankstick the rod had been propped up on while I got everything sorted out. On the mat my first job was to get the flying hook out of the mesh, by which time the other hook had come free and all I had to do was pull the bait out to finish the unhooking. I noticed just a few leeches on the pike's plumping up belly. Into the sling, a quick lift on the scales and back to the water. 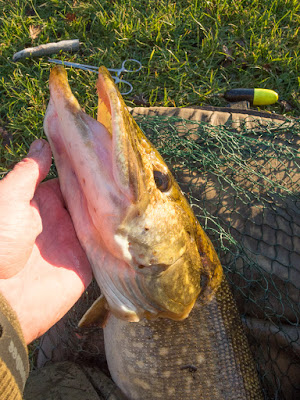 By now the heat was gone from the sun requiring me to zip up the bunny suit and don the woolly hat. It wasn't long before the water on the mat was turning solid and slippy. One more move before dark.

This time I was tucked up between some high reeds and watched as a small flock of long tailed tits foraged before going to roost. Water rails sharmed on the far bank and numbers of fieldfare flew around in a seemingly random manner as the western horizon turned magenta.

A mere handful of starlings flew in and straight down to the reeds without any preliminary circling. In the dying light a sparrowhawk glided across the lake as it often does at this hour. Perhaps to take advantage of birds beginning to roost.

This time there had been a lot more bird activity, on and off the water, than my previous two trips. Coots and moorhens were in evidence, and the mallard were back in numbers. With one pike caught I felt there was a chance right until the light had gone, but it was not to be.