Time for a break?

Another frustrating piking blank the other day has just about finished me off. When I fished with Nige Grassby a lot he had a knack of picking a rod up, giving the bait a twitch and getting a take. If that didn't work a pike would grab the deadbait as he wound it slowly back. Whenever I tried that I would twitch the rig into a snag. I certainly don't remember catching any pike doing it. Yet twice last time out I had baits nailed as they got close to the bank. Had the high pressure got them on the lookout for moving targets? The first time the pike didn't do much, and I think it might have dropped the bait. The second time it was definitely moving off with the lamprey head. I still managed to miss it. The bottom hook was free of the bait when I wound it in. Maybe it had been loose when I struck. I'll never know.

I'll also never know how big these fish were. Pikers often console themselves when they miss a take by saying it must have been a jack. Sometimes it will be. But what about those times the bait looks like a chainsaw victim? Long, deep slices across it. Missed takes aren't always from small pike. Big ones can be picky too.

With frost forming on the rods, net, unhooking mat and everything else close to the ground I packed up in the dark. The main reason I'd gone in the first place was to see if putting reflective tape on a float would make fishing into dark easier without resorting to isotopes or starlights. Not using bobbins as well as floats it's hard to detect takes which don't steam off and take line when the float is hard to see. The reason I got the last take was because I was winding the rig in  few yards at a time to keep it visible in the gathering gloom. The tape worked. I didn't really need to put my head torch on full beam to pick the float out. A camera's flash really picked it out for a photo. I'm not sure I'll be bothering again though. However I did notice that when the sun shone on the tape it stood out well against a dark background. So there might be more mileage in the idea. 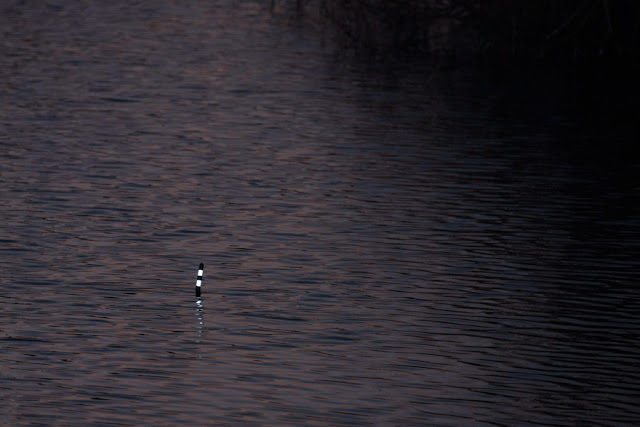 On that downer I decided against a final piking trip today. Regardless of my lack of success I just don't feel motivated to fish for pike at the moment. Daft as it seems I still find myself wanting to catch eels! With that in mind, a mind currently preoccupied with photography plans, I think I'll give the fishing a break for a while. Possibly until the weather warms up, the days lengthen, and I can face spending a night or two each week under the stars. Although I'm sure I'll start getting withdrawal symptoms long before April.

This lack of enthusiasm might also be a combination of having I've fished myself out this year and rapidly encroaching old age. Certainly during the summer I seemed to be going a lot, and catching regularly. There aren't many pages left in my little Black n' Red notebook either. I'm certainly not feeling as young as I used to...

While the sizes of fish I've caught haven't been huge they have been acceptable to me, especially considering I haven't left the county to catch any of them. Lancashire isn't exactly a Mecca for specimen hunters.
If I do manage a good long break, those eels had better watch out because I'll be after them every chance I get! 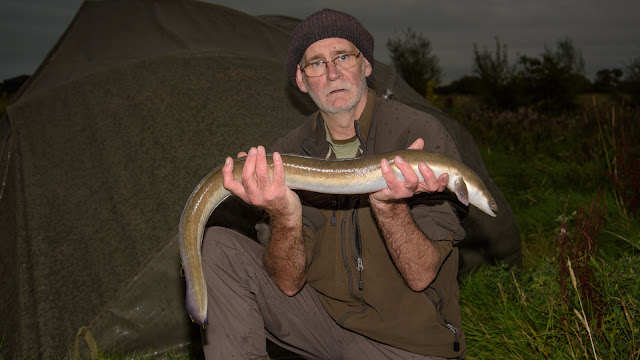