Getting out of the habit of going fishing is all too easy at this time of year when the night arrives early. These last couple of months I have been as busy with rod building as I can remember. Many's the day when I haven't got everything done in time to snatch a pike session. An hour of daylight isn't much of a window.

Things had got so bad that I was beginning to think that I'd lost all interest in fishing and that the best part of three hundred quid I'd paid out the other week for a syndicate was money down the drain. Today changed all that pessimism. I got up early and had everything I could do done before eleven thirty. The frozen Christmas lunch (pizza) was 'waved and I was on my way. What better than knowing the lake would be deserted and the weather so much more pleasurable than last year when it rained cold rain. Today I didn't even need the bunny suit it was that warm. The wind was pretty strong but from the south meaning that it would be easy to keep out of. There was a threat of rain on dark, so I took the brolly and my waterproofs. 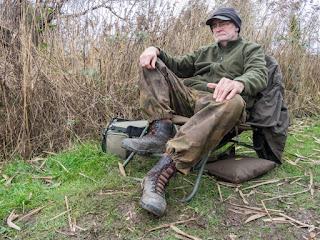 Sure enough, there was nobody else daft enough to be fishing on Christmas Day. After a bit of a wander I decided to fish an area I don't give much attention. The first swim I passed looked tempting enough, so I dropped in to it for an hour. One bait in the left margin, one to my right where there were still decaying remnants of lily pads on the surface, and the third out as far as I could chuck it.

A flock of fieldfares, very flighty birds, kept alternately wheeling around in the wind and perching high on the hawthorns. The sun broke through and all was right with the world.

An hour was enough in that swim. It didn't feel right. The next swim was another I've had no pike success in, but plenty of eel action during the warmer months. Again the baits were spread out with two close and one far. After ten minutes I wasn't happy with the far bait's position and recast it a bit further. Tucked behind a tall stand of reeds the wind chill was nil. Now the clouds had close over and there looked to be rain out to the west. Maybe the wind would keep the wet at bay. I looked up and the far float was laying flat,  the line hanging slack. Holding the rod the float didn't seem to be moving. I wound down anyway and felt a weight, briefly, before the bare hooks came back. Damn. On with the other half of the bluey and try again.

For some reason I felt sure I'd get another chance in this swim. I resisted the urge to move. At four the right hand close range rod lurched in the rest. Once more the float just bobbed on the waves. There was nothing there when I wound down, and the bait was unmarked. Liner? I'll never know.

The sun began to set and the light to fail. there was an avian commotion high behind me. I turned to see a sparrowhawk making off with its Christmas dinner. It looked like there'd be one less fieldfare roosting in the flock tonight.

With the light all but gone from the sky I had to call it a day. Despite ending the day pikeless it had been good to recharge the fishing batteries, though. Sunset will be noticeably later in a week and soon it'll be easier to get those late afternoon sessions in. By the time spring is here and the eels have woken up that syndicate money won't have been wasted after all.