It's carried on being a case of all work and no play. With not as much work getting done as I'd like thanks to the continuing non-arrival of blanks and fittings. The law of sod dictates that the stuff I need most pressingly is the stuff which fails to arrive. You'd imagine that item A ordered before item B would arrive first. Not in the world of fishing tackle. Thankfully the weather has turned unsettled so slaving away at the work I can get on with hasn't been too frustrating. but when Tuesday turned mild, dry and sunny I headed out with the pike rods. 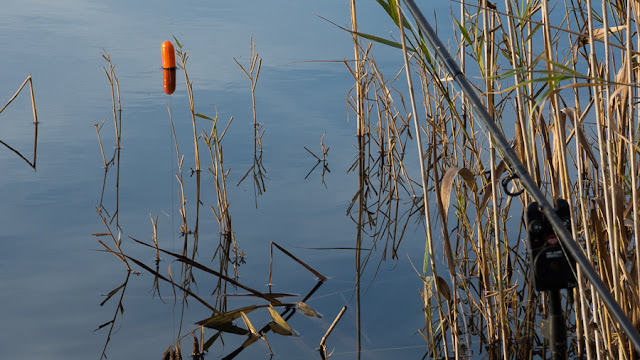 This time I ditched one of my set ups that I was playing around with and replaced it in the quiver with the tried and trusted float leger rig on a P-5. After clearing out the bait drawers in my freezer I discovered that I wasn't as well stocked with fresh baits as I'd thought. I still had enough to allow for a variety to be used, lamprey, herring and bluey as it turned out. I'll have to top up soon though.

Conditions seemed pretty reasonable despite the sunshine, but the first swim I tried failed to produce in the hour I fished it, moving baits around too. The second swim gave me access to a few decent spots and the baits were duly scattered around them. As there was scope for recasting to different areas I decided to stick it until dark in the swim.

With less than an hour to go a recently recast bait, the lamprey head, was picked up and a very twitchy take ensued. This was to the 11ft 3lb Torrix. Not the most powerful rod in the world. Even so it failed to take on a bend of any description when I connected with the bait nibbler. The reason was obvious when a pike of about one pound came to the surface. With just one point of the end treble right at the tip of its snout I managed to shake the fish off in the edge! I hoped that was the start of something of a feeding spell. I should have known better. When the micro-pike are out and about it usually means the big ones are lying low. There ended the session.

Rod fittings that I use on a regular basis are the ones that are scarce, which means that anything I don't use many of turn up without any problem. Among them recently have been an Alps reel seat. I understand that they look nice, but for someone such as me who likes to use practical fishing rods they are like stepping back 30 years.

Fuji's composite reel seats were hailed as a great leap forward when they were introduced, among other reasons for being lighter than metal seats, and also for being warmer to the touch in cold weather. Win win, as the saying goes.

I'll give the Alps seats one thing. It's fun spinning the locking nuts up and down the threads. Kind of like playing with an executive toy!