What day is it?

For some unaccountable reason I've been a day ahead all week. Monday felt like Tuesday and I'm still not convinced it isn't Saturday tomorrow! August continues to be warm, but not always sunny. Quite good for eel fishing to my mind. Except that the idea of eel-wrestling in the rain doesn't appeal to me. That's why I've picked dry evenings to carry on chasing Anguilla anguilla. A combination of rainy forecasts and work related restrictions on my time have prevented overnight sessions. So it's been just a couple of short evening sessions. Not requiring waterproofs or bunny suits makes grabbing a couple or three hours more of a pleasure than a chore too. 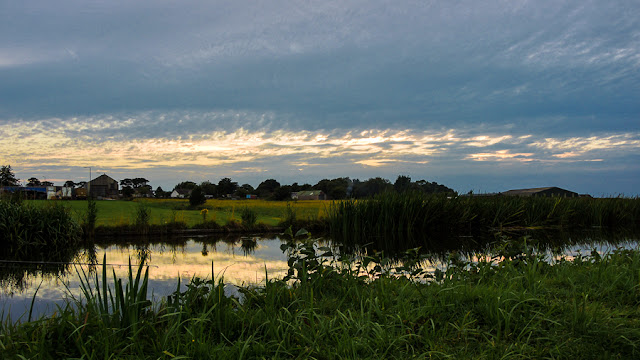 Last week I got sidetracked on a website that sells tape. I'd gone looking for masking tape and found bright orange (and Realtree) Gaffer tape. When all you have to do is click a mouse it's all too easy to buy more than you really need. My worm bucket is now so well camouflaged I might have to use some of the orange tape on it's lid to stop me leaving it behind. Which is what I've done to my landing net pole and some banksticks. There was a reason for buying the tape. Having almost forgotten my net a time or two recently I'm hoping it'll make these things stand out when I shine my headtorch around a swim as I pack up in the dark. 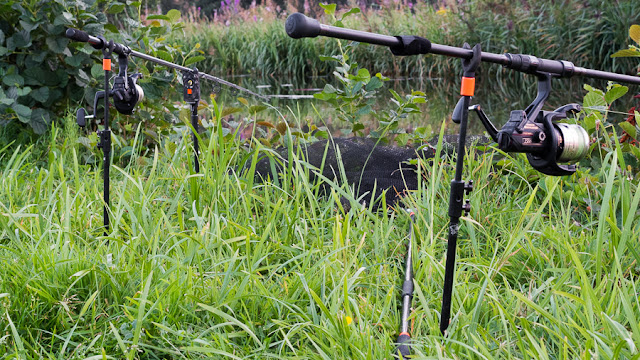 My approach to the eels has continued in the same manner as before. A couple of worms, on suspended one legered, and either a deadbait or piece of squid legered on the third rod. Two rods are back on braid with one fishing mono. Traces are wire for the fishy baits and Quicksilver or Amnesia for the worms. The Amnesia is a bit of an experiment. reading the old Pike and Predators magazines I saw someone recommend it, and catfish anglers use it to avoid tangles. In 25lb or heavier it should resist an eel's teeth.

The first session was one of those frustrating ones with dropped runs and pinched baits to both sorts of bait. One steady run to a roach head produced a small eel from close in. I've been packing up shortly after dark for a couple of reasons. If I stop any longer I'll be tempted to stay later still, and also because runs seem to become less frequent the further into dark it gets. It's as if there's a feeding window from half an hour or so before proper dark until an hour after. That's my excuse. Mostly I just want to get back home for a brew! 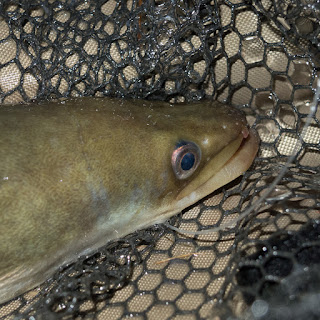 I arrived earlier for my second session for no good reason other than it was better sitting looking at water than a computer screen. I didn't expect anything to occur until the light faded, and I wasn't wrong. It was very nearly dark enough to put the headtorch on, with my hopes fading, when the legered lob was picked up by something that had no intention of stopping.

These fast runs are often missed in my experience. Not this one. Even on mono and a fair distance I connected immediately with the eel which promptly began to writhe on the surface. That was what it did all the way in to the net. I think that its writhing made it easier to net as it wasn't stretched out. This one looked worth a weigh.

Worms can often get swallowed by eels but this one was hooked neatly in the bottom lip. The Amnesia didn't get tested by the eel's teeth, but I did manage to mangle it with the forceps. After slipping the eel back I chopped the hooklink back and retied the hook, put on another worm behind the inner tube bait retainer and cast back out.

I'd hardly set the indicator and hadn't got sat down again when the sounder box was blaring again. This time it was the fishy bait that was steaming off in no uncertain manner. This time my strike failed to connect, but winding and winding I made contact with something that was staying deep and trying to pretend not to be an eel. At times I got the feeling I was connected to a pike. I wasn't. Again a writhing eel was easily netted. This one looked bigger than the first one. Certainly around the head and shoulders. The scales proved that it was bigger. By an ounce! This one was also neatly hooked. They say eels are enigmatic. They certainly are. One day they are impossible to hook, the next they swallow your baits out of sight, the next they are easy to hook tidily. Enigmatic or annoying? You decide. They're certainly a challenge.