Tailwalk of the unexpected 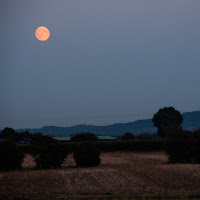 A change of venue was in order yesterday. One guaranteed to provide action of some sort to worms. I arrived late, not having planned to set out at all until I could think of nothing better to do with my evening. The full moon rising made me wonder if eels fed best at this phase or if they'd prefer the darker nights. I didn't ponder on it for long though as having a bait or three in the water is a more reliable of finding out than watching the sky.

One reason for turning out had been the impending end of the dry season. Rain is on its way for the weekend. It was still t-shirt warm by the time I got two worms out, one legered out from the bank, the other suspended  by the right margin. The third rod fished a roach head close in on the bottom to my left. All was set. Sure enough I had a couple of single bleeps in no time at all. I'd only been sat down for ten miutes when the roach head was away. A quick strike and I was pulling back at an eel. That was promising. Not a big fish by anyone's standards, but a start. 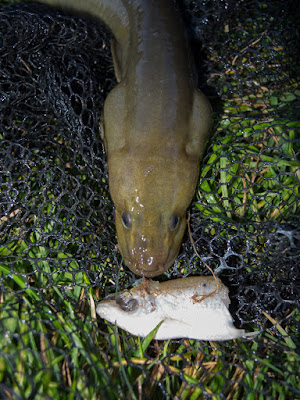 The tail section of the roach went out to the same spot just over the marginal weed and I settled back again. Something pinched half the worm that was fishing off bottom. I rehooked that bit and added another lob.

At nine o'clock that bunch of worms was away. I did the hand over the spool thing to strike and immediately whatever it was shot off taking line from the still disengaged spool. By the time I got the reel into gear I had a pretty good idea that what I'd hooked was lean, mean and green. When it tail waked I knew I was right!

The worm rigs I've been fishing with Quicksilver hooklinks so I was doubtful that the pike would be landed. However, the hook proved to be lodged in the corner of the fish's mouth and the braid was in the clear.

A skinny fish showing signs of either disease or previous poor handling it had the head and length to make double figures in a few months. Another success for my suspended worm rig, even if not the intended quarry.

I didn't realise it immediately but the pike had been landed using one of my ten foot Torrix stalkers. The more fish I catch on these rods the more I'm coming to like them. So much so that I think they might become my eel rods of choice for the rest of this season. With a 3500B baitrunner on they feel just right. 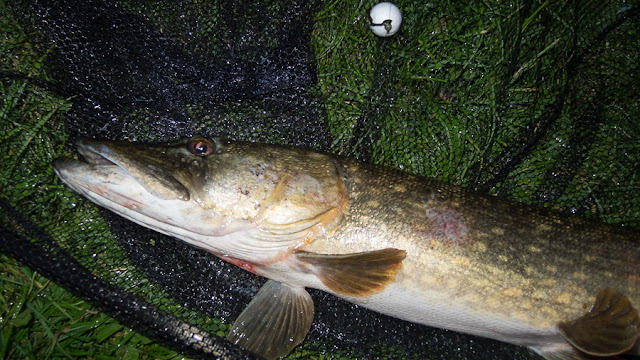 The light was going now, and as I rebaited the size ten hook a barn owl made a silent and ghostly fly by a few feet behind me. With the air still hot and the moon casting shadows it was an evocative sight in a mystical Paul Nash way.

Twitches and pinched baits carried on. Nothing positive, though, and I called it a night early.