Let there be light

I'm a great believer in getting my money's worth out of stuff, but there comes a time when putting up with a failing headtorch gets too much for me. That time came last week when trying to unhook an eel in the dark and the constant flickering of the light did nothing to make the job easier. It isn't a case of old batteries either.  Looking back through this blog's archives it seems like it's eight years since I got the headtorch that was letting me down so a replacement was in order. The old one will do as a spare. 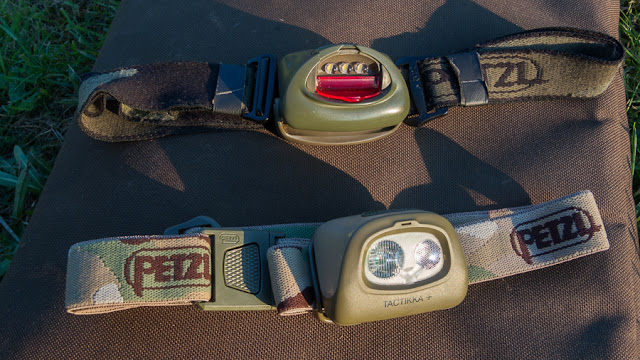 I would have taken a chance on a fancy new design, one of the Fox ones, but the tackle shop only had the cheaper model, with fewer features, that takes two batteries rather than three. So it was another Petzl ordered on-line for me. I remember my first LED headtorch being a revelation compared to the ones I'd had with a bulb. The light was more even and a better colour, the batteries lasted longer and the whole thing was tiny compared to the bulky light unit and battery pack.

Things moved on with number two which had a flip up red screen to keep insects away. The latest one has three power settings in white light and one in red plus a flashing red light, all arrived at by pressing a button. And it's still very little larger than the headtorch it's replacing. Naturally enough this new toy was a good excuse to have another short eel session on Sunday.

I'd got there before six on Friday and nothing happened. Nothing at all. I'd packed up without a sniff. A change of swim was called for this time, and a later start was made. It's the last hour of light that seems to be producing at the moment. The usual baits went out and I sat back to watch the sun set noticeably further south than last week. With the hawthorns red with berries and a late evening brown hawker zipping about it's starting to feel like Autumn.

Right on cue, at twenty to nine, the legered worm was taken. At first I thought I'd hooked  small skimmer until the tell-tale wriggling started. Just as I got the small eel close to the net, as it was spinning splashily on the surface the water boiled and the rod was pulled briefly to my left. A jack had shot out from the reeds and grabbed the eel. The eel didn't seem too concerned by this! 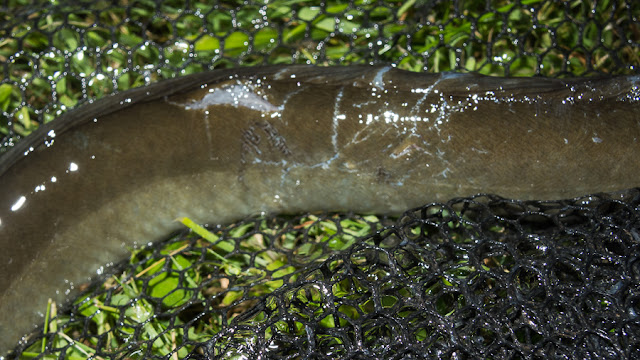 There was just time to put another worm out. This time I cast it further out, dropping the deadbait where I'd had the take. All that happened was that it got dark and I was able to try my new headtorch out as I packed up. It worked great. On the middle brightness setting I could see what I was doing, on red I could get to the rods without tripping over, and on the lowest it was fine for walking back to the car.

For these short sessions the Korum Multi Mat is proving good. I gave up on putting the banksticks in the bankstick pocket after very few trips. They were banging against my side, and it's quicker to throw them in the mat itself. Having a two piece landing net pole works well as that all rolls up in the net and also goes in the main mat part. Three rods get banded using the built in bands and away I go. Ruckbag on my back with worm bucket clipped on to a caribiner, deadbait/squid coolbag folded up in my low chair and I'm good to go. I might try the mat for piking this winter - when a brolly isn't required. 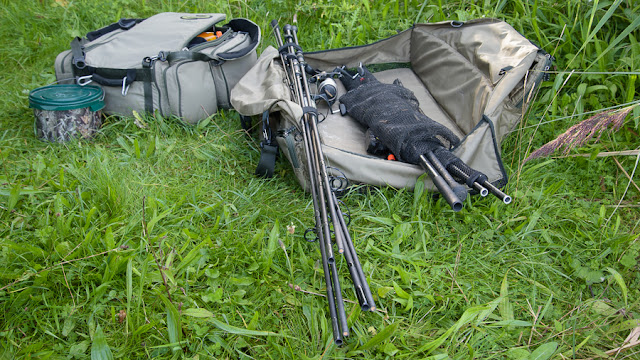