Whenever I see a tench roll in front of me when I'm deliberating over where to fish it makes my mind up quickly. This was another 'turn up late' overnight session, but I wasted no time getting the rods out having seen that fish. I plopped the marker float on the spot, cast one rod to it and moved the line marker on that rod used that to set the markers on the other lines. With three baits out (two plastic casters, two grains of fake corn and a 10mm tench scarer) I spodded out some seeds, catapulted out some pellets and finally set up camp for the night. Then the kettle went on.

I was treated to a close view of a black headed gull trying to steal a meal from a common tern just above head height and a couple of rod lengths out. A while later the same tern noisily chased a kestrel across the lake.

It had been a hot day and there was little wind. Even the clear sky didn't cause the cold to rush in after dark. Night time was the cue to swap the casters to a grain of glow corn and the fish scarer to a larger pop-up on a carp rod. It really did feel like summer had arrived. The midges certainly had so I lathered on some midge repellent.

Not a rat was seen. Nor a fish caught. At dawn I went through the usual ritual of a bite to eat and a brew before putting the tench baits back on and spodding out the bulk of the seeds. The plastic baits were fished over the seeds, with small mesh bags of pellets used to protect the hook from bottom debris. The tench scarer got cast away from the baited area, also with a small bag of pellets.

It was quite a shock when the scarer rod was away at ten to five. When I say 'away', there was no line being taken as the baitrunner was pretty tightly set, but the rod was bouncing on the pod! There was one tench that hadn't been frightened! Although the fish had come to the net with some weed attached, that lovely grassy weed that tench seem to favour, there wasn't much being picked up when I wound any of he rigs in. 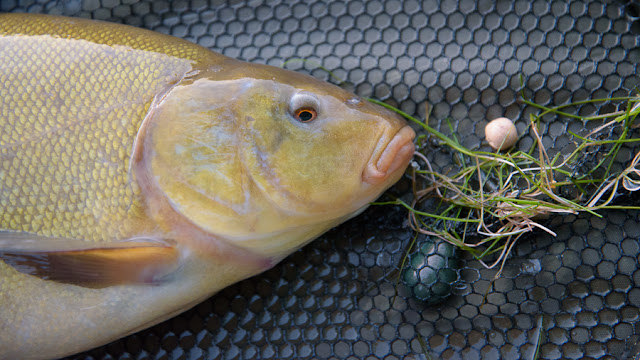 With a cloudless sky the sunrise wasn't as dramatic as it can be, but its stillness promised another red hot day. 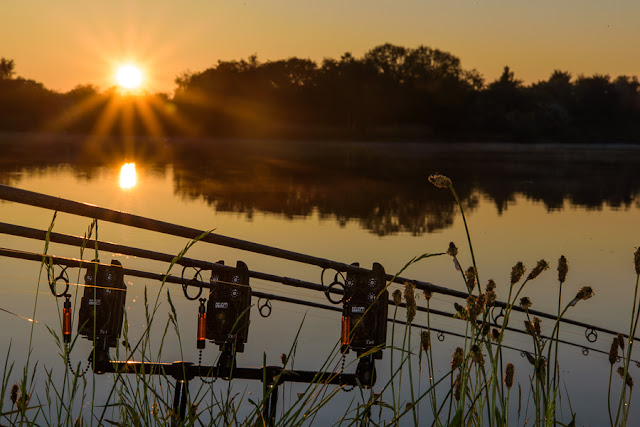 An hour after the first take I had another, to the same rod. This didn't feel like a tench. It didn't feel like much to be honest. It looked a bit strange whatever it was. A bit of carp, a touch of fancy goldfish and maybe a hint of crucian? 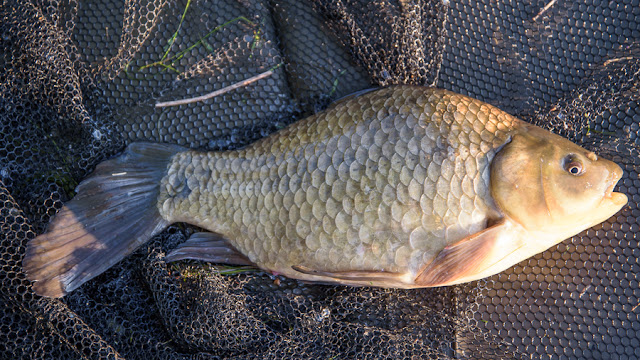 More reliable than a train timetable it was exactly an hour later that the tench scarer failed to scare another tench. The third tench was running late, arriving at twenty past eight when the sun was getting high in the sky and a nice ripple was on the water from the light easterly. Then the timetable went to pot. It was twenty to eleven as I waited for the test match to restart when the biggest tench of the day so far picked up the scary bait. By now it was pretty obvious, even to me, that the reason for the bait's previous failure to attract tench was that I'd not put one near any tench. A new moniker for the bait is required!

Fifteen into play at the test the third tench's twin turned up, and forty minutes after that the first small male tench of the season for me. Half an hour after that one another male was in the net.

Come what may I was going to pack up when the players went for their cricketers' lunch. It felt like I could have carried on catching tench on the little round balls all day, but sometimes you have to go. I loaded the barrow and pushed it along the path round the lake. I'd not gone far when I thought about gratuitously running over a dead leaf caught in the grass but it looked a bit odd for a leaf. Avoiding it with the barrow I took a backward glance at the 'leaf' and saw it was actually a pair of mating moths. Despite catching seven tench and something else, spotting these moths made my day. A quick check of their ID on returning home revealed them to be eyed hawk moths. A first for me. 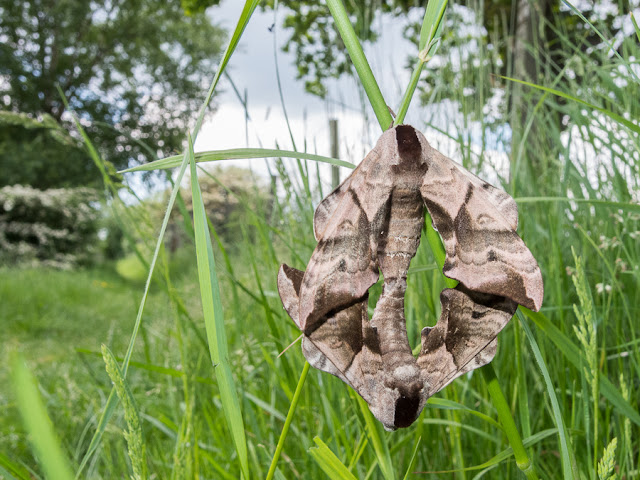