More than half the battle when it comes to catching fish is location. No matter what the species, you can only catch them if you have a bait in front of them.I was going to take advantage of the drier evening no matter what, but if the swim I'd seen produce a couple of carp on Tuesday was free there'd be no way I'd fish elsewhere. I'm not completely stupid! As it turned out the lake was deserted...

There are two spots that are obvious places to place baits so they got scattered with pellets and the baits dropped over them. The closest rod started out with plastic corn on the hook but I swapped it to a 10mm fish scarer on the off chance. Some more fish scarers were scattered around it. Well I might as well throw them in a lake as a bin. The third rod got a boilie type thing put on the hair and chucked out randomly on its own. I couldn't even be bothered putting a bag of pellets on the rig.

The grebes were milling around again, this time the courting couple made a half-hearted attempt at some weed waving. It wasn't quite as windy as the evening before, warmer too but not sunny. Birdsong was prolific and once more I bemoaned my lack of identification skills in this area.

I've been using my lucky sweetcorn for some years now, carefully removing it from a rig when the hook gets blunt and putting it on a freshly tied rig. It's very economical. I think I might have a lucky plastic pellet now. Around ten to eight something picked it up. At first it felt like another bream, then it might have been a carp, but finally it got all jaggy and I knew it was a tench. Judging by the bend in the 3lb Torrix it might be a decent one too. In the net it had me guessing again. Unlike the mug from last week it was rounded out and clean looking. Not the biggest I've caught, and from other waters only worth a mat shot. I might not even have bothered with a self-take as it was, but one of the carp fanatics had turned up a few minutes earlier so I got a 'grip and don't grin' shot for a change. 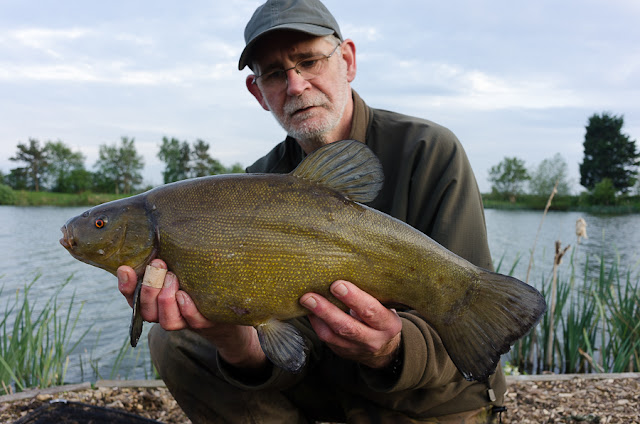 Check the rig, put on another bag of pellets and out again. Forty minutes later Lucky the Pellet was picked up by something a bit heavier. Twice as heavy in fact, although sadly not a tench. A rather sick looking common was soon in the net. It had red blobs lifting some of its scales and a dull grey sort of film over its body and eyes. As if it was wrapped in opaque plastic. It seemed fit enough though.

Check hook, add bag, recast. Sit back and relax. I pondered over the success of the new reels and wondered why the usual jinx wasn't working. Two reels christened in two days with two local PBs. Something wasn't right!

Earlier in the day I'd been thinking about my locally caught specimen challenge and how it wasn't going too badly. Nothing large by national standards, and not much prospect for that with the possible exception of a big eel, but compared to what I'd have been overjoyed with in my teens, pretty pleasing.

At nine o'clock the fish scarer failed to live up to its reputation and the third reel got its head wetted. After a decent scrap for a carp, which included the swimming round in circles under the rod tip ritual, I had another common in the net and another local best increased. On the mat and panic set in. The hair was bare. I'd lost my lucky sweetcorn. I looked around the swim for it before remembering I'd swapped it for a fish scarer. Phew!!! Quite a nice looking fish apart from an absence of pelvic fins. Again the other angler obliged with the camera - after insulting my unhooking mat for being too small... The cheek. 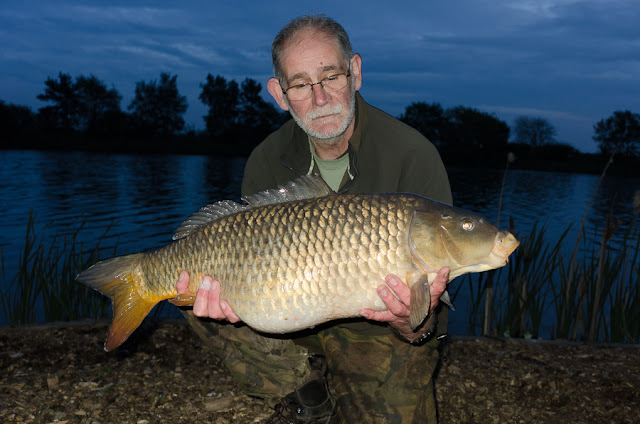 This place must be stuffed with carp if I'm catching them, and on my crap rigs. I'd better not tell anyone my hooklink material cost about a tenner for 100 yards, and that kilo bag of fish scarers will probably last me until winter. I'm not mean, just economical with my bait and gear. One thing seems to be working. Using carp gear catches tench, and it means I don't wreck a swim when I do hook a carp as used to happen with smaller fish than I've been catching of late. A nine pounder could wipe out a margin swim using my two test rods but carp twice that size get landed faster on heavier gear.

A pity there are so many carp in the place. The more distant carp waters I've tench fished were bigger and had lower stock levels so the carp were less of a nuisance. Then again those tench were keener on the traditional tench approach than this lot appear to be. Maybe I'll try plastic casters on one rod next time. I've yet to catch a carp on those. Famous last words?