I take it back 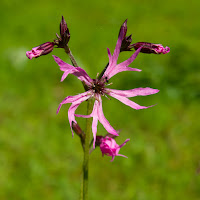 Saturday I sneaked a cheeky evening carp session in. Not expecting much away from The Petting Zoo I wasn't disappointed at my complete lack of success. Sunday was reserved for the soaking of pigeon conditioner (and work). Monday was work-filled until tea time. Leaving the timer on the rod drying machine I set out for another late evening lazy set up, this time intending to fish until after lunch.

All went to plan. I'd not forgotten anything. Nothing important at any rate. Just the big brolly was required given the forecast for a dry night and another hot day to follow.

Half the seeds, to which I'd added a tin of corn, got spodded out along with a pint or so of mixed pellets. The maggots could wait until dawn. No point attracting too many bootlace eels with them during the night. The spodding taught me a couple of things about these new-fangled Spombs. Firstly they are rubbish for using at close range. They need to descend almost vertically to open reliably. An under arm swing doesn't cut it. Secondly they don't seem to like pigeon conditioner. The tiny seeds get in the closing mechanism meaning it won't close. Thirdly they hold a lot of water from the particle mix. Next time I'll be throwing a couple of my old spods in for close in baiting just out of catty range. In the meantime the Fox Spombalike is going to get some holes drilled in it to drain my seed mix. 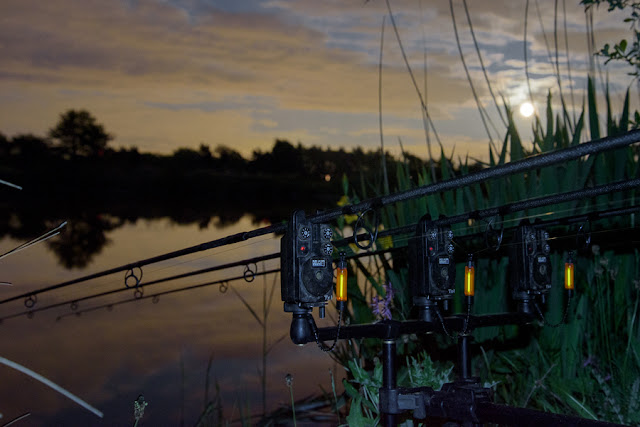 Darkness is coming around ten fifteen now. The just-past-full moon tempted me to play around with teh camera. I felt pretty sure I'd not be disturbed by any fish even though I'd swapped the fake casters for a grain of useless glow corn and the 10mm fish scarer had been swapped for a larger wafetery thing which I cast well beyond the baited area.

Just one little rat appeared early on, ate some spod spill, then scurried away not to be seen again. That was good. The westerly died away and the lake went mirror calm. Fish of various sorts, including tench, had been showing on the surface before dark, but during the night little disturbance was heard or seen. Late on a mist rose from teh water as the sky cleared. Not for long though.

A few minutes before four I was woken by a stuttering sound from the sounder Velcroed to the brolly shaft. Half asleep and spectacle-less I blundered out and grabbed the left hand rod. A small eel felt like it was wriggling on the end of the line. Once I came to my senses I realised it wasn't an eel but a tench. And to the glow corn too. I take back everything I've ever said about it being rubbish! Not quite in the dark, and probably not glowing much after more than four hours, but a confidence booster for the bait. 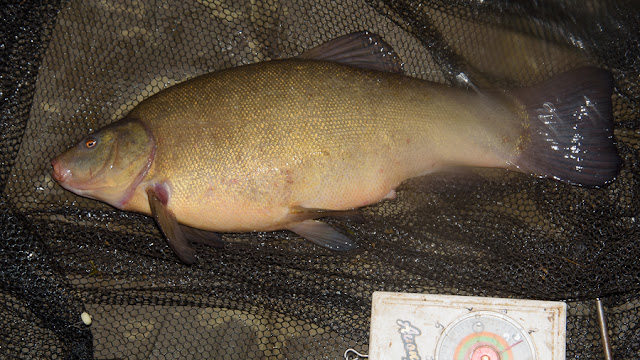 With the fish returned it was time for a brew and something to eat to get my energy levels up to cope with the impending non-stop tench action that was sure to occur once I'd put the rest of my bait out. This time I used the catty to get the seeds more or less where I wanted them. The wafter was removed and replaced by the maggot feeder and casters. I stuck with teh single grain of glow corn, and the two yellow grains on teh thrird rod. Three plastic baits. All being fished in full confidence. Strange. 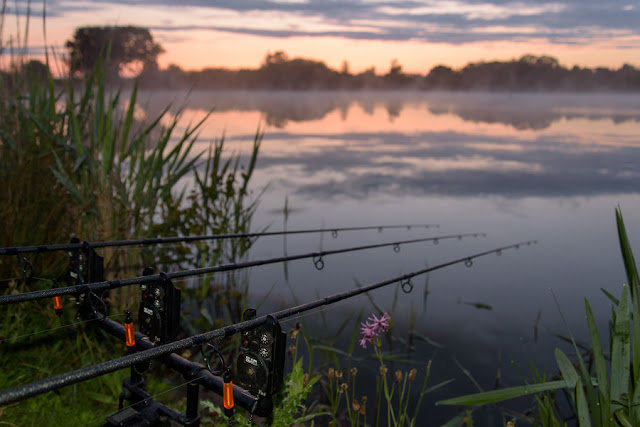 By eight the bunny suit was removed. By nine the fleece was gone and the sweatshirt followed soon after. It was another hot one. The wind had swung to the east then died away to nothing. Willow fluff drifted about on the water, a chaffinch sang its heart out from the topmost branch of a fir, a kingfisher flashed by and a distant yellowhammer could be heard. I even saw my first damselfly of the year. The scent of the hawthorn now in full bloom, making me think it's prime tench time, seemed to be accompanied by the hum of summer. The hum turned out to be an approaching tractor spraying the crop in the field behind the lake...

As the sun arced round to the west my brolly gave me some shade. As the wind picked up again it provided some relief from the heat. Apart from odd single bleeps, which I think were liners from small fish as the bobbins never moved, nothing much was happening. The calm surface wasn't being dimpled or disturbed. It was as if the fish were keeping their heads down. I got mine down too and caught up on some sleep.

Lunch would be had at twelve then I'd think about packing up. Not much thinking was required and I was away at one. Hardly had I set off than the sky clouded over and the temperature began to drop to a more bearable level.

A fish caught and some practical lessons learned. I even got to use my new water container. I'd prefer it not to have a large logo embossed on it, but it's more robust than the two smaller containers I've been using for something like 20 years and which are looking in danger of splitting! The only negative I can think of so far is that I can't see how full it is. The old bottles were translucent, making it easy to judge how many brews I had left. As this one is a litre more than the capacity of the two old containers combined it should suffice for a two night session. With a bit of luck. It stashes nicely in the bag of my barrow, which is handy. 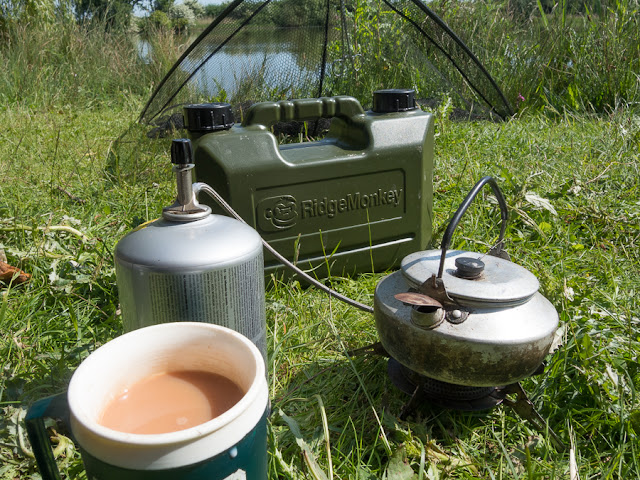