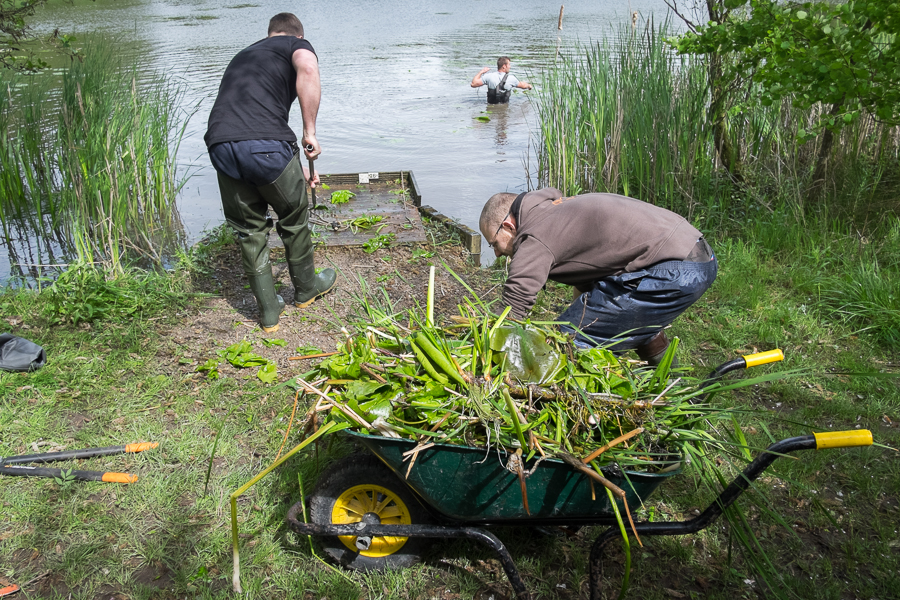 In a fit of madness I joined a carp syndicate. It seemed like a good idea at the time. The water is reputed to hold some big eels. Full of enthusiasm I even attended a work party. The youngsters were more suited to doing the work so I watched them and drank tea. It fired me up to get the eel rods out early though, and a few days later, after an early tea, I set up the pod to fish off a horrible platform, while carp cruised around all over the surface and right under the rod tips.

The start of the warm weather must have addled my brain. After a couple of hours I had had enough but stuck it out until dark for one pull to the right hand rod. It might have developed into something if I'd not left my drop-offs at home. then again it could well have been a carp picking up the worms. I didn't enjoy the place much. Too many carp anglers (three) and dog walkers (lots) for my liking! Still, when the tench have spawned then a night or two on the place might be in order. 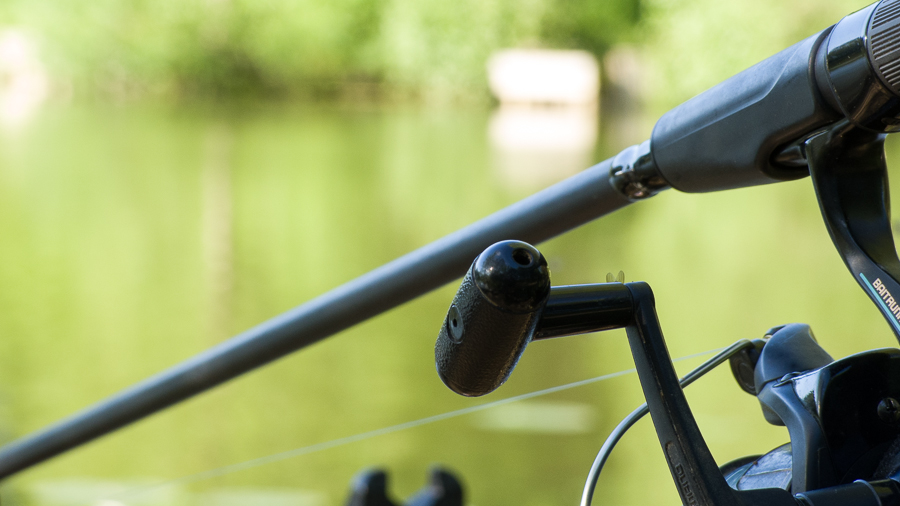 By Saturday I was thinking of tench again and boiled up some more hemp to lace with the corn I'd stocked up with. Being uncertain of where to fish I set off without the tackle for a look around. As I approached the peg I'd fished last time out a fish bolted from the margins. I crept closer and another swirled while one cruised past the edge of the swim. It looked like a decent tench but without my shades it was hard to say. Further on a group of mid-size carp were milling about near some pads. At least there were fish moving in the area.

What a difference a week makes, though. While there had been bottom weed about between the groups of lilies there was open surface water last time I'd fished. this time the whole place was choked beyond under-arm lobbing distance. Three swims were unfishable without the use of a rake. At least the swim I'd seen fish in was clear enough close in to get three baits out. Casting around with the rigs it was obvious that the clear spots on the bottom were small. It had to be PVA foam on all baits.

The in-line maggot feeder got the floating plastic maggots, the slow sink plastic corn on the helicopter got put on a long hooklink, and the pellet got dropped in the edge on a clear spot. Despite a liberal dose of hemp, corn and mixed pellets over all three baits the bobbins never moved. Few bubbles suggested fish feeding in the area. I fished until it was well dark and not even the rats came out to play. Another angler had caught a tench in a different area, which gave me some hope.

Sunday saw me wandering round the lake with my 'roids on sure of spotting some carp if nowt else. I saw one cruising, and more appeared to be spawning, or getting ready to. Even so I saw enough to make me chance a session in clearer water this morning. If I could drag myself out of bed.

Somehow I managed to get up at four and hit the road. The day was dawning during the drive, with the side window open I was accompanied by the dawn chorus all the way to the lake. There was a light mist hovering in a ban over the fields. An almost full, but waning, moon high in the clear sky. It felt tenchy.

On my way to my anticipated swim I passed an area where carp had gathered to spawn and saw signs of them swirling under the pads. It looked kind of tenchy there, but I knew it was weedy as hell. I wanted some cushy fishing for a change. With pads and weed to my right, open water in front and more pads in the left margin I chucked a feeder round to suss out the weed situation. Clear! That would do for me. I fed right and left with a couple of pints of hemp, corn and pellets before altering the rigs a little. Off with the popped up maggots and back on with the sinking casters, away with the long hooklink for the corn and back to a short one. The pellet rod only needed a fresh bait putting on the hair. With the baits in place I sat back to watch the sun rise, the mist swirl and look out for signs of tench.

It was less than an hour before the right hand feeder rod top was twitching and the alarm bleeping intermittently. Something small had hooked itself. It turned out to be a roach-bream hybrid of a pound or more. Not quite what I was hoping for, but after five blanks on the bounce it was most welcome. The tubercles on its head and rough feeling scales suggest it might be ready to spawn, or perhaps, like the bream at the carp lake, already spawned. 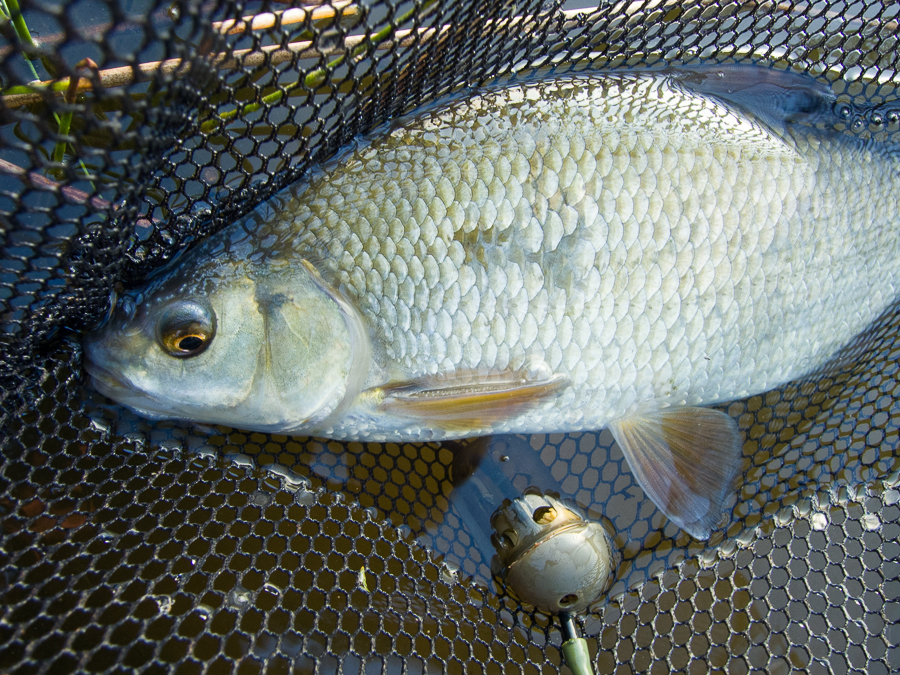 Something else tried to hang itself on that rig, but got free before I could get to the rod. Bubbles over the feed to the right encouraged me to keep topping the swim up with more hemp. The day and the fish were waking up. For all that's romantically written about tench feeding on still, warm, misty dawns I've found they prefer the sun on the water. Sure enough it hadn't long climbed above the tall willows when the right hand rod, fishing a pellet at right angles to the rod tip, hooped round decisively. So decisively that before I could pick it up it had bounced off the alarm! 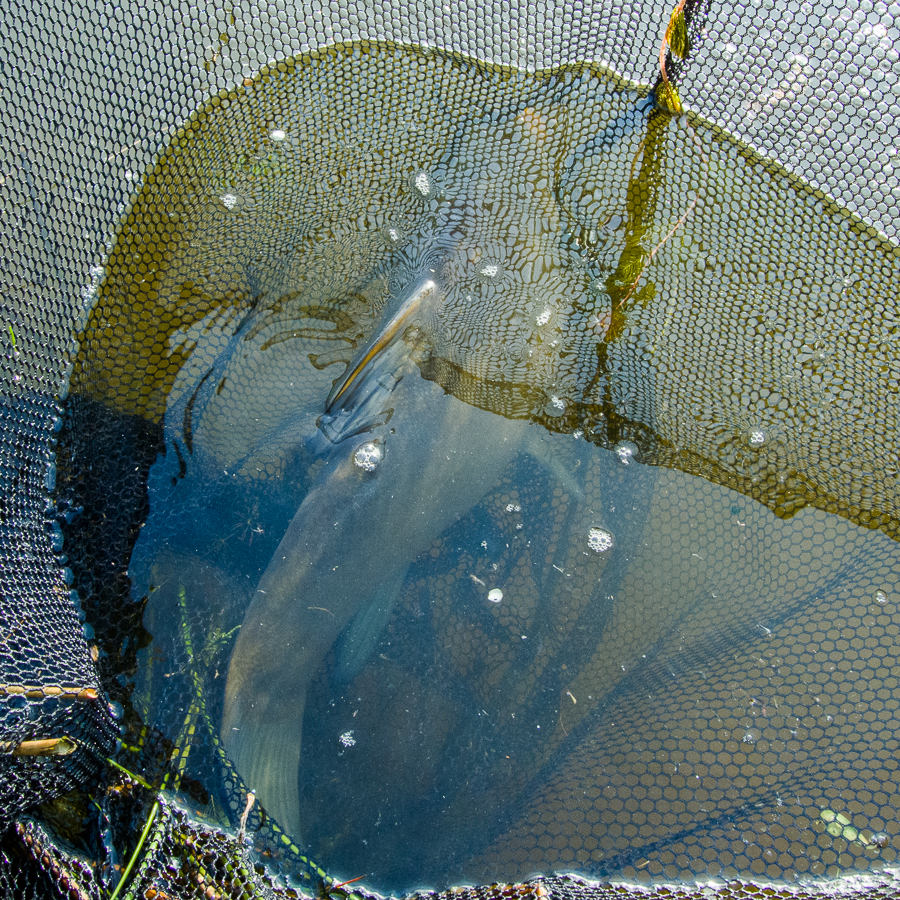 The fish had weeded me, but steady pressure got it moving and it plodded to the right and out into the lake. I had a horrible feeling it might be a carp by the way it hugged the bottom and kept going. When it was in front of me and I applied some pressure it gave a tell-tale tench wiggle. I think it might have been balled up in weed to start with, because when I got it coming up in the water a couple of stalks dropped from the line. There wasn't much of a fight and the female tench was easily netted. A small but solid fish, beginning to fill out with spawn.

On with a fresh pellet and top up both swims with more hemp and pellets. Shortly after the tench I had another of those jangly bites that refused to run or drop back. This time to the pellet. Another surprise capture. A half pound roach.

As the morning hotted up, my fleece had been abandoned before six, more patches of bubbles appeared over the right hand baited area. The corn rod tip nodded. There were fish in the swim. A tench had rolled in the weed beyond the pads. Hopes were rising.

It got warmer, a breeze ruffled the water for a few minutes before giving up. A scum of willow pollen and fallen catkins coated the surface, reminding me of days when it had blown onto the lines almost clogging them on other venues. This set me thinking about tench baits. For some reason I'd prefer not to catch them on pellets, but I have to admit there have been waters where the maggot feeder and plastic caster approach hasn't worked for me. It's not fared too well for the tench on this lake so far, but pellets have. It might be time to fish two rods on the pellets and one on corn. 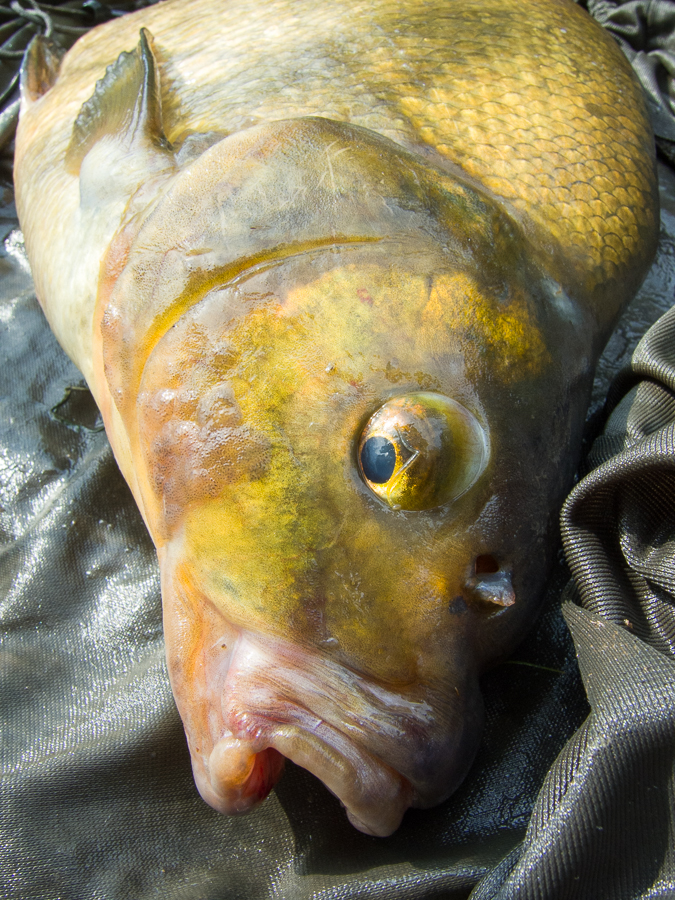 With ten o'clock approaching I packed away most of my gear. The weighsling was almost dry, as was the net. Ten would be my cut-off time. No sooner said than the middle rod got all jangly. A more robust sort of jangly than the roach and the hybrid had managed. The two grains of plastic corn had worked again. Whatever it was felt heavyish. It was plodding like the tench had. However, when it decided to pop to the surface, roll over and surrender it was obviously a bream.

Not a huge bream, but a nicely conditioned, brassy-flanked, six pounder. Another half hour was in order. I could manage that long without food. The last of the bait went out, followed by the rigs.

A couple of newly emerged damselflies fluttered into the hawthorns which are starting to show signs of going over now. The guelder rose is starting to bloom, to be followed by the elder, by which time summer will be upon us.

With no bites coming in the last thirty minutes I packed up, again, and sweated my way back to the car.