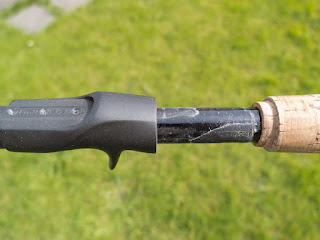 This wasn't the first time I'd been given a rod with a rotating reel seat to repair. On two piece rods it's not a big deal to strip of the butt ring and remove any foregrip and the reel seat to do the job properly. On a one-piece lure rod it means a full strip of all the rings, pretty much a complete rebuild. Sometimes there is a bodge possible whereby the rear cork grip is removed and the work done from the butt end. It works out a little cheaper. This was the option I offered the rod's owner.

Another way round the problem is to drill into the reel seat and inject warmed epoxy between reel seat and blank. The seat is usually pushed over rolls of tape with gaps between them. The seat will have come loose because of insufficient glue, and there will be plenty of room for more.

That was my first line of attack. I slowly drilled into the seat using a hand drill. As soon as I was through I had a close look and saw neither an air space, nor tape. Strange. Another hole was drilled with the same result. And a third. It looked to me like the reel seat had been glued directly to the rod blank. In which case there was no way the seat would slide off the bottom of the blank because of the taper, and the full strip down would be required. There was only one way to find out for sure.

As the foregrip would have to come off eventually no matter what I cut a short section of it back and slid the reel seat up. Sure enough it had been glued straight onto the blank, and as shown below, there wasn't much glue actually binding the two together.

With the foregrip being as long as the reel seat I did have one more option open to me. I contacted the owner and suggested a cost cutting bodge which he approved.

Initially I was going to leave the very front portion of the foregrip in place, as below, but after consideration decided it should all go. The blank was cleaned up, tape applied (I don't know why no tape had been used in the first place) and the reel seat glued with sufficient epoxy. This was left to cure while I readied the cork to make the foregrip.

I wouldn't be able to shape the cork once in place so opted for a straight grip with rounded ends. The preformed cork section was cut to length and the bore reamed out to match the taper of the blank. Then I waved my magic wand and it leapt into place as if it had been there all along!

I squashed the cork so it split along its length, applied glue to the blank and the cork which was then placed over the blank and bound tightly with tape. A little sanding to smooth once the glue had set overnight and it was job done.

This bodge isn't always possible. It was the length of the forgrip that made it so in this case. The same cork squashing trick can be used to replace sections of cork which have become damaged mid-handle. One of the benefits of cork over man made grip materials that repairs such as these can be carried out without the join being obvious because of the 'grain' of the cork.