Back for another evening session. This time it was a cooler wind blowing from the west with a hint of north in it. I went to a length of canal where the setting sun wouldn't dazzle me as I bagged up on small fish for bait on the float. That was the inevitable plan. Equally inevitable was its failure. 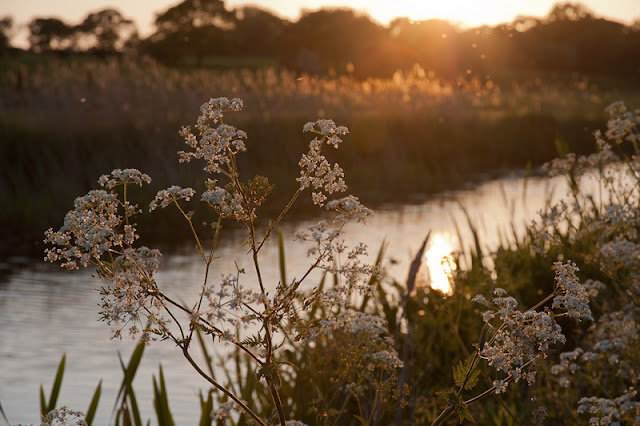 The first bite came after just five minutes and resulted in a just-right roach resting in the landing net. The next bite came as I thought to myself that it was time to give up and put the one roach out as bait. That bite gave me a not-quite-right roach/bream. It went in the net even so! I blamed my lack of success on the constant activity of the reed and sedge warblers in the reed stems behind my float distracting my attention and stopping me fishing efficiently.

My problem now was how to cut the roach in two. My ever present trusty penknife having removed itself from my pocket. The scissors in my minimalist tackle box are short in the blade. I managed to hack the fish into two and cast the tail close in over some maggots and the head over to the edge of the sparse reeds on the far shelf. That might be dangerous as past experience (circa 1983) was that baits placed there for eels often lead to the fish running into the reedbed and becoming immovable - or, if not hooked, then the rig would snag up irretrievably.

For this session I did away with the mono link between mainline and leader. It seemed superfluous. Again I was fishing tight to the lightly set bait runner. The knotable leader is finished with a loop which goes over the link on a quick-change swivel. This is a nice simple set up. In fact coupled with 12lb mono and my 11ft 2.5lb P-2s, by simply changing the hook link, it could be used for carp, barbel or zander. A minor tweak and 15lb mono or 30lb braid would make it an even better multi-purpose set up. 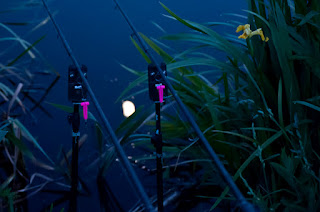 Right on cue at a minute or two before nine the first run was missed to the head section. The bigger bait was knocked on the head and cut up. It was only a minute or two before that was being taken. Mere twitches on the line which were struck at and missed. Another recast with the head section and it was a longer wait until the far bait was again being inspected. Another missed strike resulted in a lost bait.

Next time I shall be using my light pike drop-offs. That was the approach I used to use for eels, so I can't see why it won't still work. The rig shall be refined slightly with a heavier lead and either a run ring or large eye swivel for the lead. I might even give braid a try. One thing's for certain. I'll be making sure I have a better bait supply in future.