I still can't get into tench mode. The changeable weather isn't helping. Yesterday, when I was driving to and from the Derby area in radiant sunshine, watching the hawthorn blossom sliding past in the hedgerows, I was eager to get the gear sorted and boil up some hemp. Today I stepped out the back door into another chilly morning and changed my mind. There's also the frustrated urge to fish for something else this spring/summer which isn't coming to fruition for various reasons. 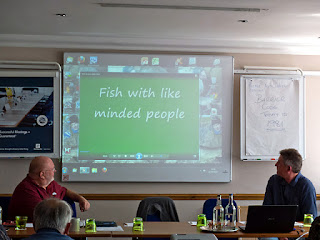 What was I doing in Derbyshire? Attending the PAC's three-yearly committee handover. The newly retired committee have been accused, by the ranks of keyboard warriors, of not doing much for the last three years. Financially they were somewhat restricted in what they could do. A steadying hand was required on the tiller to get the club back on fiscal course.

That they have done what they have done without shouting about it from the roof tops before the event has actually helped their successes. A recent issue involved someone taking pike for sale as food. This was brought to light on the internet and the KWs were out for blood. The PAC acted quietly, under the radar of the internet lynch mob, and got a result. The force of the law was brought to bear on him by a diligent and careful approach from the PAC. The seller had to remove mention of pike from his website.

The new committee is brimful of enthusiasm and ideas to drive the club forward in this modern age of instant communication. The vision is to be applauded. If it all gets pulled together and pulled off as planned the club will have a superb virtual presence. Whether that will result in an increase in real membership is another matter. An old cynic like me will have an interesting time watching things develop over the next three years!