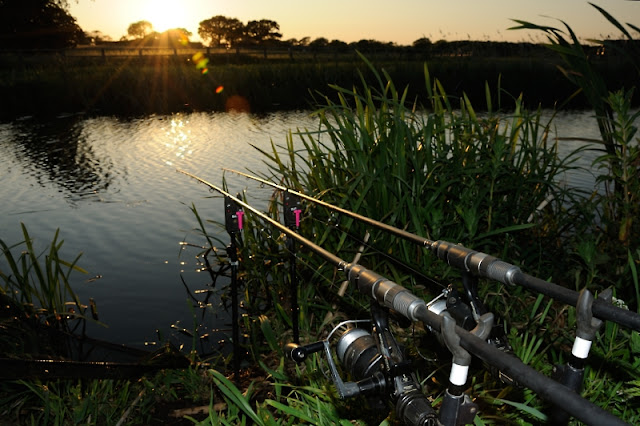 Having used up all my frozen roach I bought a pint of maggots yesterday. I can usually winkle out a few flirters in short order from the canal when the weather is like it is at the moment. Spray maggots out and fish a pellet waggler set shallow with a single small shot a few inches from the hook. Cast out and let the float drift around, or inch it back if there's no wind. Not textbook fishing but it finds the shoals of small fish cruising from mid-water to the surface. Once you get a bite fire out more maggots to that spot and recast over them. The fish keep on the move, unless they're tight to a feature like lily pads or gaps in reeds.

This evening it took me fifteen minutes to get the first bite. It was from a skimmer that would have been fine for pike bait, but was bit too big for eels. By my standards at any rate. Although I have caught eels on pike-bait sized deads when piking I like a smaller bait when specifically targeting eels. The second proper bite, I'd had a maggot sucked to a skin, came half an hour later. The bait was borderline but got popped in the landing net in the edge in case it was all I got.

This fish was the cue to make up a wire trace to replace the one that got 'turtled' the other evening. No sooner had I tied the loop in the wire than the float sank again and I swung in a more eel-bait sized skimmer. Time to get the eel rods set up. The head section was cast across to the far shelf, while the tail was dropped just shy of the middle and had a couple of good handfuls of maggots scattered over it. Time to sit back and watch the sun set.

All was quiet until a couple in an inflatable dingy motored along. Considerately they cut the engine and paddled past me, firing the outboard again once they were a good distance away. I had had to wind in the head section as they approached, and it was cast back out.

I had expected the wind to drop today as the sun set, and it did. It was much more pleasant sitting by the canal compared to last time out. The heat from the sun wasn't being dissipated by the breeze. Various flies were benefiting form the lack of wind and some were dancing over the surface of the water. Others were biting my ears. 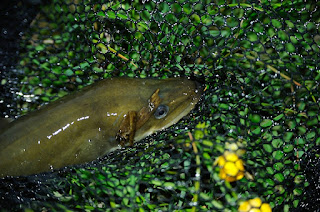 It was about nine fifteen, and still light, when I reached into my bag to root out my head torch in readiness for the impending dusk. I didn't want to have to try and find the torch in failing light with an eel writhing around on the bank! No sooner had I turned away from the rods when the left hand bobbin twitched a couple of time. I struck straight away and was sure that I was connected to an eel and not some rogue amphibian. It wasn't the biggest eel I've ever caught, weighing a pound and a half, but it was the first one I've caught by design for some time.

The bigger skimmer was despatched and the head section cast out. I was contemplating packing up at ten when I had an absolute screamer on the right hand rod. I was fishing a tight line to a slack baitrunner to see how it would fare and the spool was spinning like a top. My strike met with thin air! I cut the remaining tail section down to size and cast it back over the maggot patch.

By now the only light was the afterglow. It would be all but dark by half ten. At quarter past the right hand rod twitched a couple of times and the bobbin dropped an inch. The bobbin lifted and dropped back. I fed some line to give a longer drop. After a minute or two the bobbin rose in  series of jerks. Another strike failed to connect. One last cast.

It didn't take long before the Delkim sounded again. This time the line was tight and the bobbin right up. The rod tip was twitching. Nothing developed. I took the rods off the rests and lay them on the reeds while I packed everything else away. With the right hand rod wound in I saw a reed near the right hand rod tip moving. There was no breeze now. The tip moved. then moved again. I struck and felt a brief resistance before the rig flew out of the water. Time for home.

I've always found eels to be frustrating fish when I fish for them. Yet when they pick up pike baits they manage to swallow them and I struggle to remove two sets of trebles. Mind you, they are also pretty good at stripping half mackerel to the bone without giving an indication. Enigmatic they surely are.