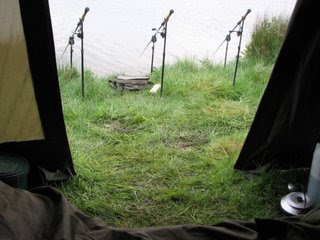 It was back into the bunny suit after the brief heatwave. Not only was there a north-easterly blowing but there was also rain around. I managed to get set up in the dry after pondering my swim selection on the basis that nobody was catching much. The decision was made more on a whim than anything, selecting a deeper swim that hadn't been fished this season as far as I know. I kept the baiting to a minimum and cast three rods out all fishing different baits. Two method feeders were set up one fishing the standby of two grains of plastic corn, the other a 10mm pineapple Boosted Wrap. The third rod fished a maggot feeder with two plastic casters on the hair.

Unusually there were lots of small fish topping all along the bank from a few yards out to maybe thirty yards. Small fish don't often show on this lake, although I have had one day in three seasons that they have been a nuisance on the maggot rod. Grebes, terns and pike were making the most of this abundance of prey, all obviously catching small roach by the looks of things.

The first night was quiet. Not a peep from the alarms. Before dark I had swapped the Boosted Wrap for three 6mm Tutti boilie pellets, and when I started to wind them in in the morning a small pike of around two pounds grabbed them. Two red maggots were added to the bare hook on the plastic caster rig, and it wasn't long before a small roach was landed. Plenty of bites came to this rod, most failing to result in hooked fish. If I had scaled things down I'm sure that a number of small roach could have been had on single maggot. But that wasn't what I was after. Around noon the caster/maggot rod produced a bream of some five pounds, followed by another little roach.

Then, out of the blue, the alarm on the middle rod (fishing the corn) screamed out, and my best tench of the season so far was landed. Not fully filled out yet she was a sleek seven pounder. As I was weighing the tench the caster/maggot alarm bleeped once. The tench was sacked while I set up the camera and as I did so the line on the caster/maggot rod tightened and I pulled into what felt like a heavy bream. In the shallows it swirled and took some line, then all went slack. The hooklink had been bitten through. Pike. I guess that first bleep had been a roach hooking itself, to be taken by one of the pike patrolling the area. 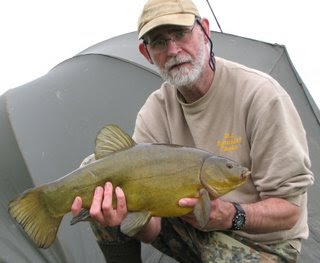 The day was not exactly warm and not exactly cold. Despite the light rain, coming in showers of varying length, it wasn't unpleasant as things soon dried out when the rain eased off. The wind was cool, but not strong, although annoyingly unable to settle into one direction.

At eight in the evening a small bream picked up the caster/maggot combo, so for the dark hours I fished without the maggots - as I did for the following day. The idea being to leave the plastic casters to wait it out for a tench. Most of the night was quiet apart from a roach/bream hybrid of a couple of pounds that picked up a Boosted Wrap at one o'clock.

Sunday dawned brighter with the wind more steady in direction, and turned out quite warm in the afternoon. The grebes, terns and pike were joined by cormorants - all catching small fish well within casting range. One tern actually took a fish from the very edge, a foot or so from the marginal rushes. The bobbins, however, were still.

As I had had a flurry of activity around noon on the Saturday I intended to stop until one at the earliest, and stay longer if action was forthcoming. Sure enough, at a few minutes before twelve the bobbin on the caster rod dropped back slowly. So slowly I thought a small roach had picked up the bait, but when I wound into the fish it was obviously not a small roach but a tench. A six pound male as it turned out. This spurred me to stop longer. As the Test Match was interesting I thought I might as well listen until close of play. I did, but no further action was forthcoming. 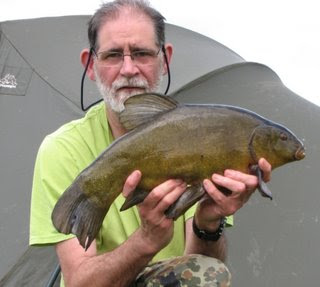 A frustrating session is some ways, but the most tench action I've had on the lake so far this season. It certainly seems like there aren't many tench, and they are wandering around pretty much at random. If you pick the right swim then one or two might move through while you are there. As they are not moving around in shoals it doesn't make too much sense to put down big beds of bait. Having watched tench grazing in a bay two years ago I don't think they follow patrol routes. Those fish sometimes turned round and covered ground they had already been over. All pretty random as far as I could tell.

If this is what's happening then the light baiting/feeder approach is probably wise. There doesn't seem much point to pile in loads of feed and sit on it until the tench show up in numbers. It might be worth a try for the bream though.

A while back I got fed up of having to go and fetch my forceps from my rucksack when unhooking fish in the landing net, so I started clipping a pair to the mesh by the spreader block. This proved to be useful even when fish were to be weighed and were being unhooked on the mat. I wasn't too sure about the security of the forceps, so I pinned a 'zinger' to the net. This arrangement is working well so far - even if the 'zinger' is looking a bit rusty now! 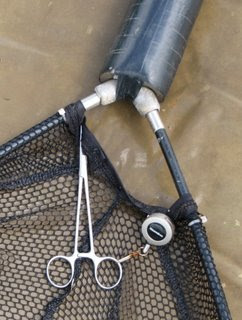